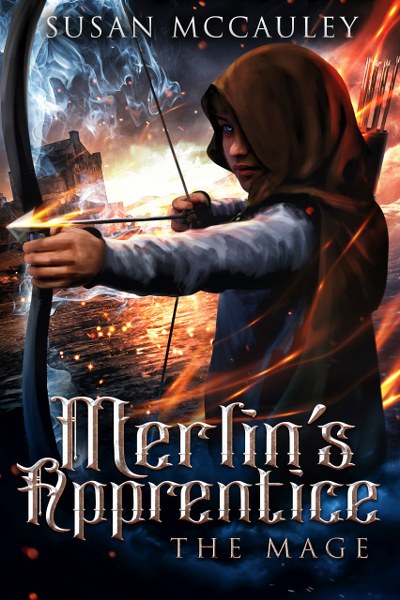 Twelve-year-old Pip must embrace his magical powers to rescue his family from slavery—or help the king save the realm—a decision that will tear his world apart.

Desperate to keep his family together, Pip hides his power so he can be sold with them. But when his father and brother are sold to different mages and the slavers attempt to separate his mother and sister, Pip loses control and injures a slaver with magic. The uproar catches the attention of the southern king’s druid advisor, Merlin, who quickly offers a place to Pip, his sister, and his mother. On the road to King Arthur’s court, bandits attack their camp, and his family is further torn apart. Pip has no choice but to work with Merlin—who may not be the evil mage Pip assumes him to be—to learn to harness his powers so he can help King Arthur stop Mordred. Only then might Pip have a chance to see his family together again. 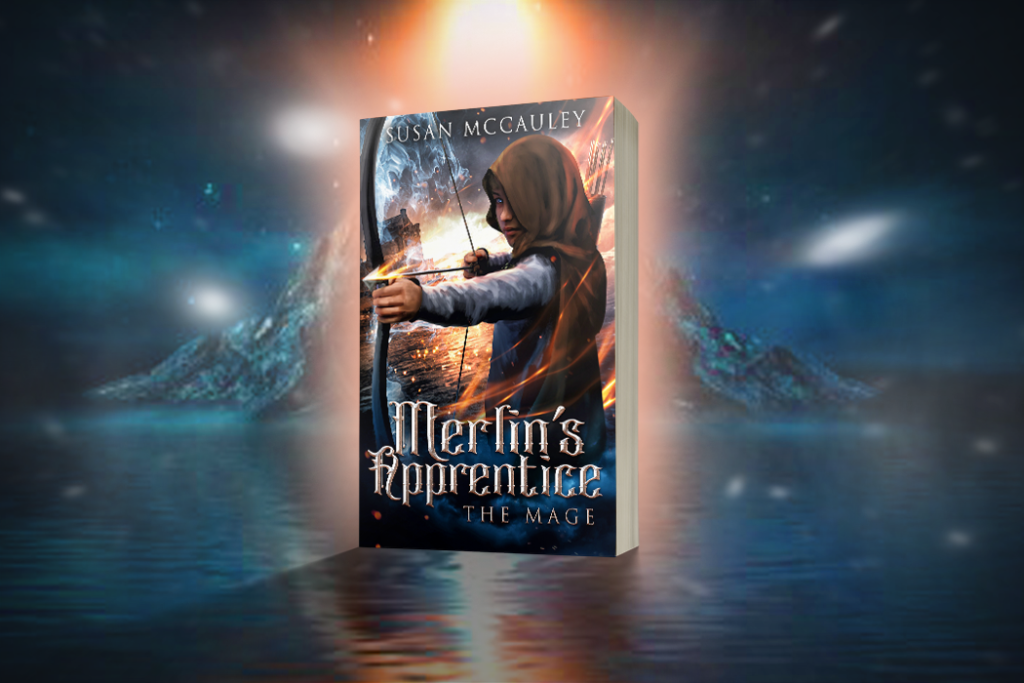 Rain slapped Pip’s face and slithered beneath his tunic, running cold down his back and into his britches. These weren’t the usual autumn mists, but bone-chilling rain. Mud churned beneath his feet, sticking in clumps to his tattered, tired boots. They shouldn’t be out trudging the roads today. They shouldn’t be out at all. No one should. But today they didn’t have a choice. Today all the villagers had to attend a summons.

No one knew what this summons would be about. The magistrate had already issued a proclamation setting a new harvest quota for the ordinarius, and if it wasn’t met, King Mordred would take more than just taxes. He would take flesh.

So they’d all had to help. Even his little sister, Mary, had worked her tiny fingers raw pulling turnips in the garden. If only they lived south—in King Arthur’s realm—then surely their lives would be easier. King Arthur was supposed to be a fair king. Pip sighed and trudged along behind his parents. Mother and Da had said maybe the taxes would increase, or maybe the rations would decrease. Pip knew that whatever the magistrate had to say, it wouldn’t be good. He was a pig who only cared for himself.

The rain dulled to a heavy mist, and a group of ravens flew and twisted in the sky, their wings nearly blacking out the pale winter sun. One dove toward Pip, its caw shattering the cool morning silence and filling Pip’s belly with dread. He stopped and stared, watching the flock disappear into a smear of darkness.

“Pip. Hurry up, lad! Stop your daydreaming,” his father bellowed. “We can’t be late for a summons.”

A shiver of power tingled over Pip’s skin as he watched the last of the ravens disappear into the morning mist and then ran to catch up with Da and the rest of his family.

“Did you see the ravens, Da?” Pip whispered so his little sister Mary couldn’t hear.

Da stopped and looked at the sky. He crossed himself and shook his head, his brow furrowed with worry. “I didn’t see any. And I pray to God there were no ravens, lad. There’s too much darkness about already.”

Pip’s stomach twisted in knots. Da hadn’t seen any ravens, only Pip had. Maybe it was another vision. They’d only come since he’d discovered he was magus, and he still wasn’t used to having visions. Real or imagined, though, surely ravens were an omen of things to come. But the magus wouldn’t possibly take more from the ordinarius families. They’d taken enough already.

“When I’m a mage,” Pip swore to his sister, “I’ll make sure every ordinarius and magus is treated fairly. Then none of us will need to worry about village summons or selfish magistrates.”

“Shhhst,” Mother hissed, eyes like whips, head twisting from side to side to see if anyone had overheard.

Da grimaced, and Galen glared. Galen. Pip scowled; his older brother always sided with their mother. Pip had never been close to Galen. His brother was old enough to work the fields when Pip was born, and they’d never spent much time together. The only time Galen ever spoke to Pip was to criticize him on his handling of a chore or to try to stop him from using magic. No wonder he was Mother’s favorite.

Pip gazed at the barren field around them. The closest villagers were several paces away. “There’s no one close enough to hear us,” he protested.

“I said not to speak of it.” Mother’s words were clipped, her eyes colder than the morning rain.

Pip held his breath and then let it out slowly instead of speaking his mind. He was glad to be a magus, even if he was new to his power, which had come after his twelfth birthday, just passed. But his family had told no one. Not yet. Mother had been especially strict that no one should speak of it. No one should know. Maybe it was because he’d only discovered his power. Maybe it was because no one else in his family had any magic. Mother was just being suspicious when she should be proud.

Pip wrapped his arm around his little sister and whispered. “When I’m apprenticed to become a mage, I’ll be sure to learn more than a few tricks to keep you safe and happy.” He tweaked her nose and she giggled.

They made their way along the muddy lane to their village, which lay south of the hill fortress at Etin, a two days’ march north of Hadrian’s Wall. Both magi-soldiers and battle mages sometimes skirted their village, yet they never stayed. It was a poor place, but the local mage lord who oversaw the ordinarius farms was kind enough. It was Mordred’s edicts that were harsh, forcing ordinarius families to cut back on their own rations to provide more to his court and the magus class ruled by the cruel northern king. And all because ordinarius had no magic. Because they were not magus. It was so unfair. At least there were more ordinarius than magus in the world; otherwise, there would be no end to the work they did for the magus class.

When they arrived at the small muddy square that marked the village center—usually decorated for festivals or alive with peddlers selling their wood or tin or cloth—it was empty of festivities. Armed magi-soldiers dressed in black and blood red, Mordred’s colors, lingered at the perimeter. Their swords gleamed in the pale morning light and their wary eyes darted from face to face.

Mordred’s soldiers were here. Fear shot through Pip’s veins. He peered around the square taking in the magi-soldiers’ armor, embossed with silver runes. Da had long ago taught him and Galen to identify the magi symbols to stay clear of trouble. He saw none of the plain clothed magi with their green sashes, nor any magi marked with the golden runes or red sashes of a battle mage. Still, they’d never had soldiers here for a proclamation before. Something was different. Something was wrong. 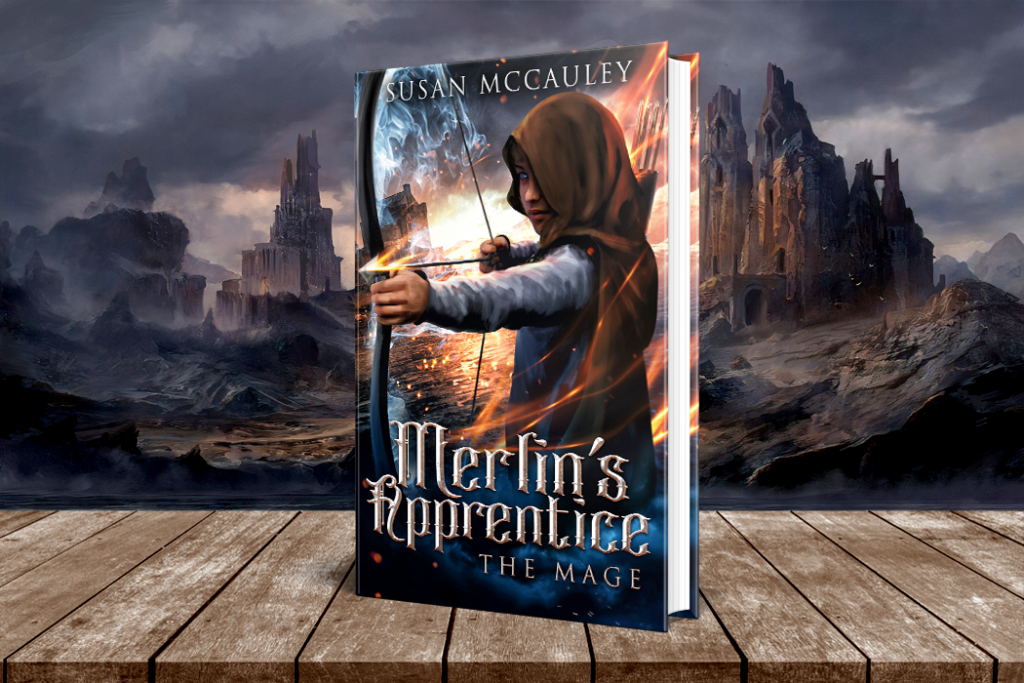 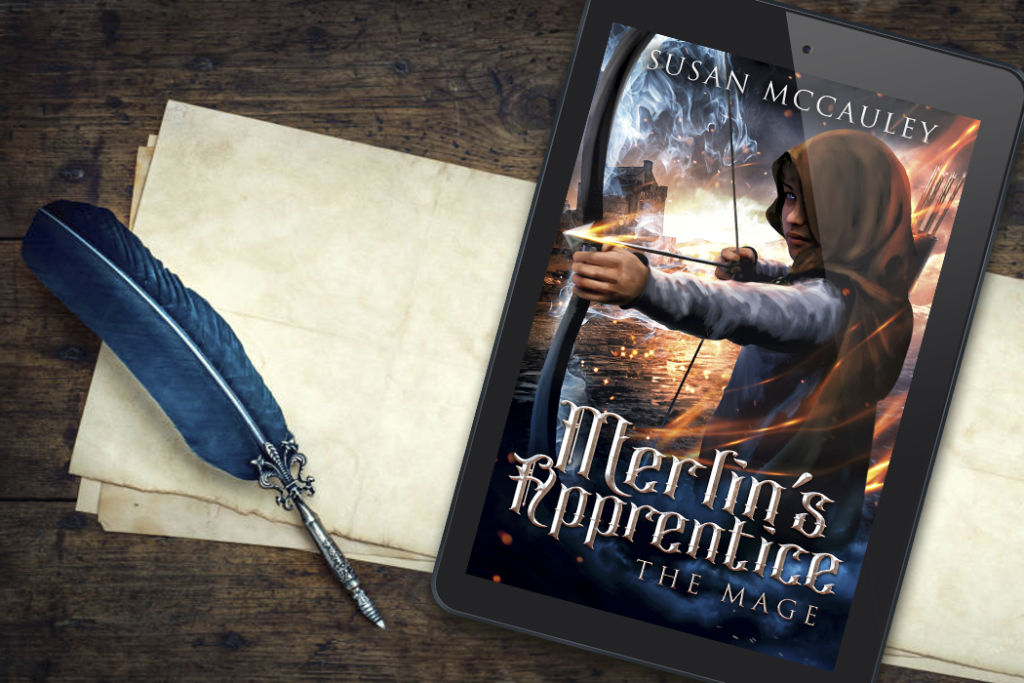 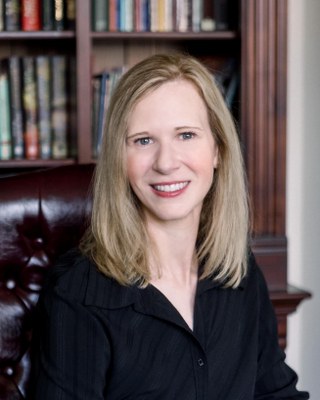 Susan McCauley is an award winning author of paranormal, fantasy, and horror for adults, young adults, and middle grade readers. She first fell in love with the paranormal when she was three years old and scared witless on Disney’s Haunted Mansion ride, but begged her parents to ride again and again! Susan has lived on all three coasts of the United States, as well as having spent a few years in the U.K. She loves to travel, snorkel, practice taekwondo, read, try new restaurants, watch movies, and go to the theatre. She’s also passionate about animals and has a special place in her heart for cats.

You can visit her on the web at www.sbmccauley.com

Dec 14
What Is That Book About

Dec 18
A Wonderful World of Words

Dec 23
4covert2overt ☼ A Place In The Spotlight ☼

Jan 4
Inside the Insanity

Jan 10
Momma Says: To Read or Not to Read