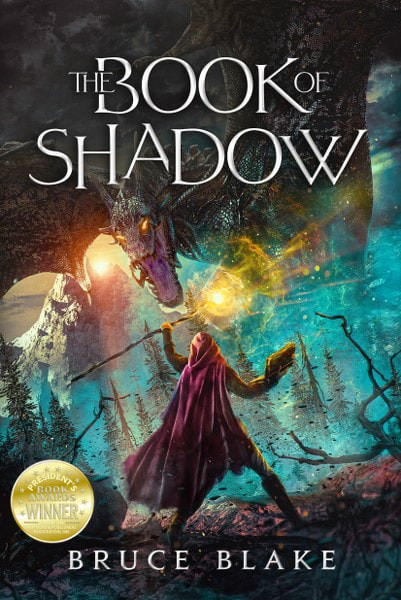 The Book of Shadow

Curse of the Unnamed Book 1

Llyris Fildarae is an outcast tainted by a sliver of magic in a world terrified of the supernatural. Loathed and distrusted, she uses her ability to control a magical Unnamed to survive.

Caedric Carpera is desperate to save his son from a deadly illness. He enlists Llyris to locate a lost tome containing secrets capable of healing him, but its location is a mystery that’s already claimed lives. Thrust into a hostile world, Llyris and her companions risk everything to find the relic and return before the child’s sickness prevails.

But who is the enigmatic old man who appeared out of nowhere to set them on this dangerous expedition? And what does he really want?

Only a perilous mission to an untamed land can save the boy and reveal the truth.

Except some truths are too shocking to be exposed.

Get ready for an epic fantasy adventure full of twists and turns from the author of the Khirro’s Journey trilogy and The Books of the Small Gods. Scroll up to one-click purchase your copy and start reading right away! 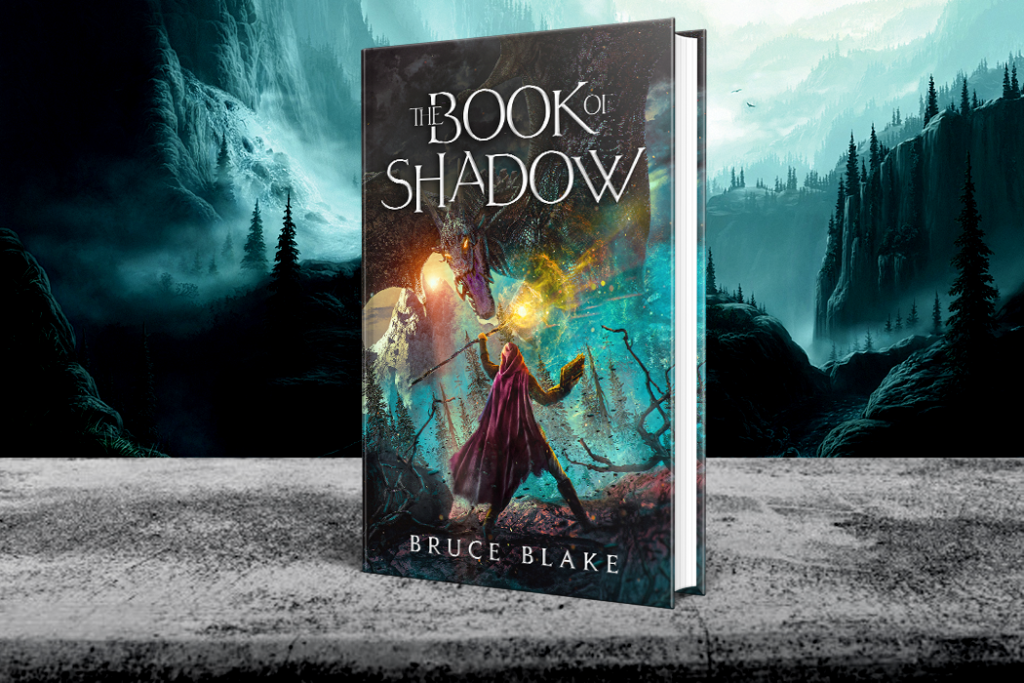 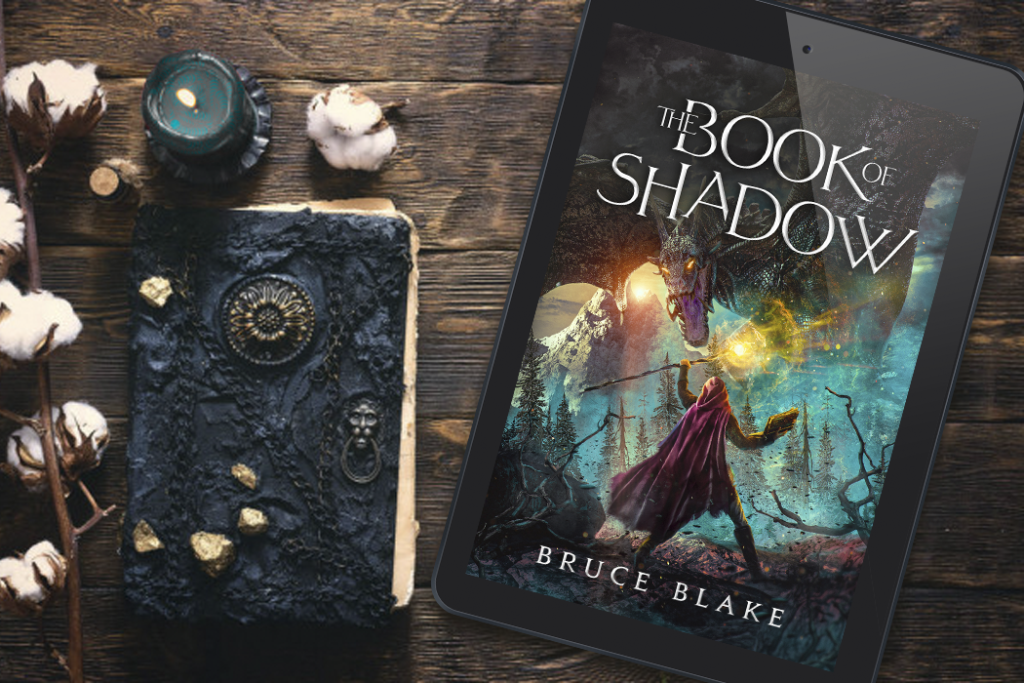 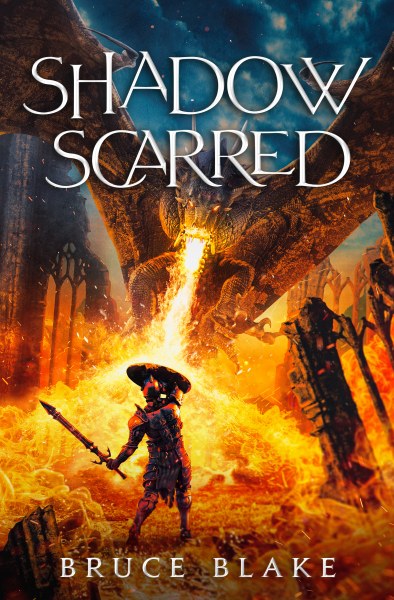 Curse of the Unnamed Book 2

The Book of Shadow was found, but the quest continues…

Llyris Fildarae is still reeling with the news of her heritage imparted by an old man claiming to be the great mage Amnayel Prisma—doubtful, though he’s proven able to perform unusual wonders even a magik couldn’t. He cured a boy, yet now demands a stave to aid in healing a fallen knight.

The quest she and her companions embark on requires them to travel to the Obsidian Fields, a place no one has visited since time immemorial. Even Prisma himself—if that is who he is—cannot tell them what it may look like or what to expect once there.

What dangers will they face? Magic? Deadly curses? The undead again?

No one knows. Not even a Shadow Scarred.

Scroll up and one-click purchase to follow the exciting journey of Llyris and her companions as their adventure continues in Shadow Scarred. 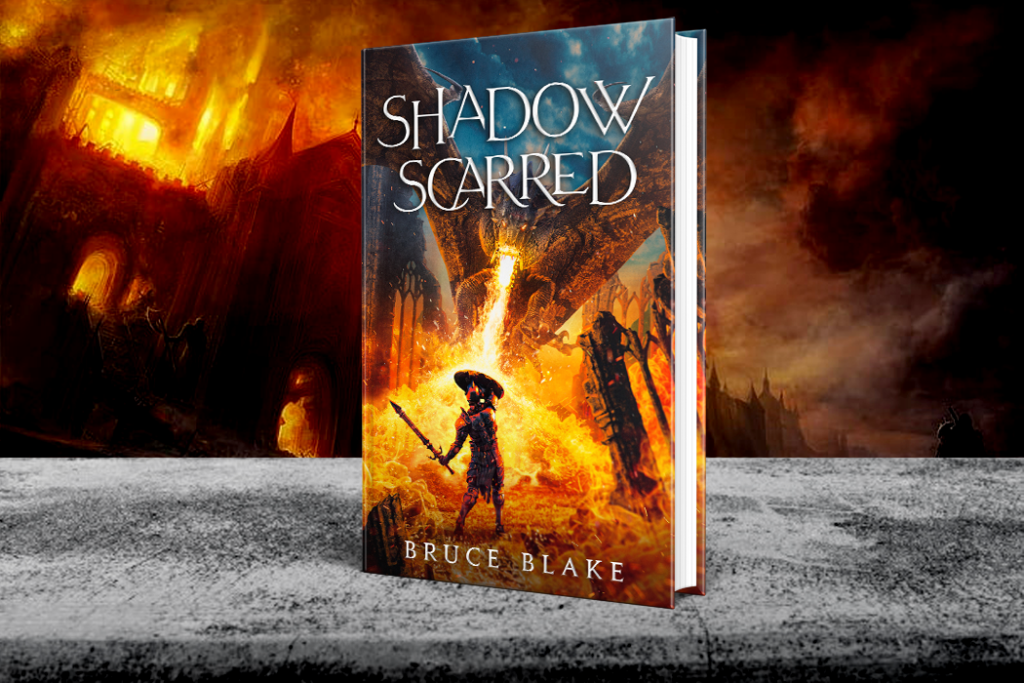 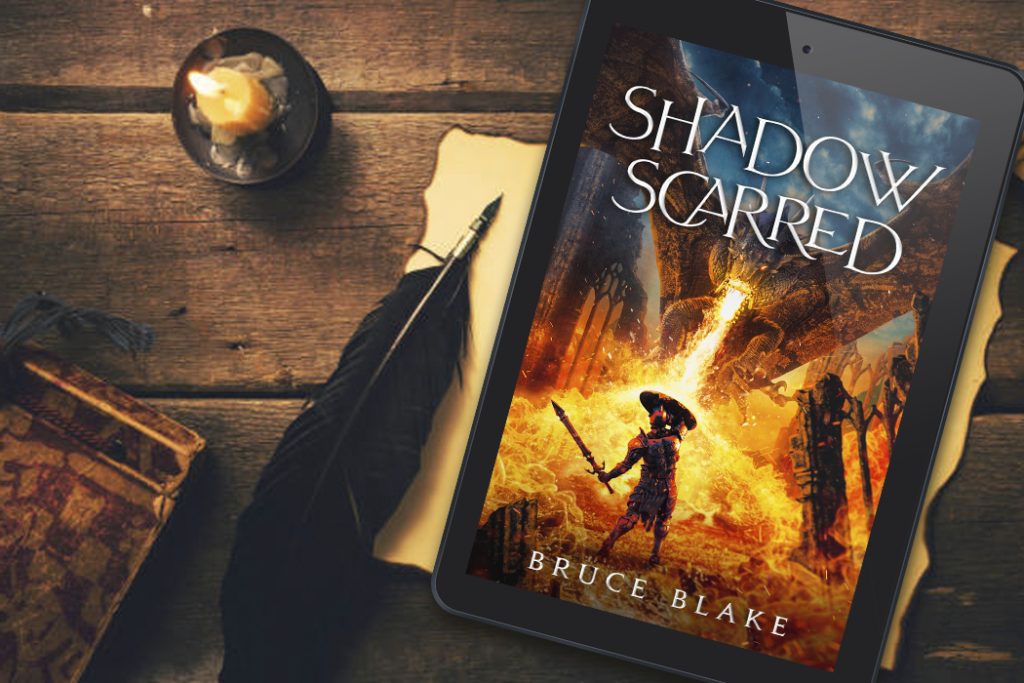 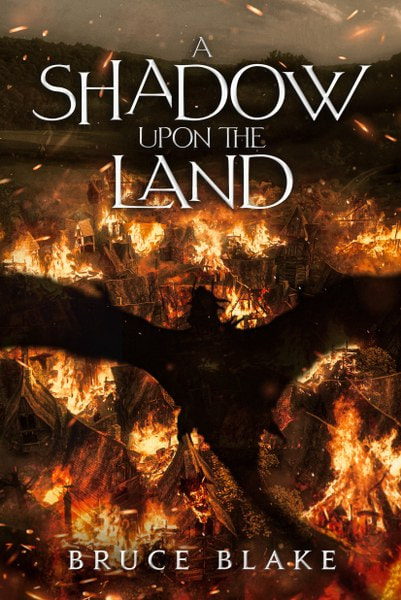 A Shadow Upon the Land

Curse of the Unnamed Book 3

A tome. A stave. The fate of the world.

When Llyris Fildarae packed up her Unnamed and took an unlikely group to locate the Book of Shadow and save a boy’s life, she had no idea the evil she’d encounter.

When she and her companions set out on a second expedition, this time to find the savior mage’s stave, they couldn’t have guessed the dangers awaiting them.

Separated, trapped, and navigating perilous lands, their only hope of survival is to find their way home.

But where is home if everything is left in ruins? 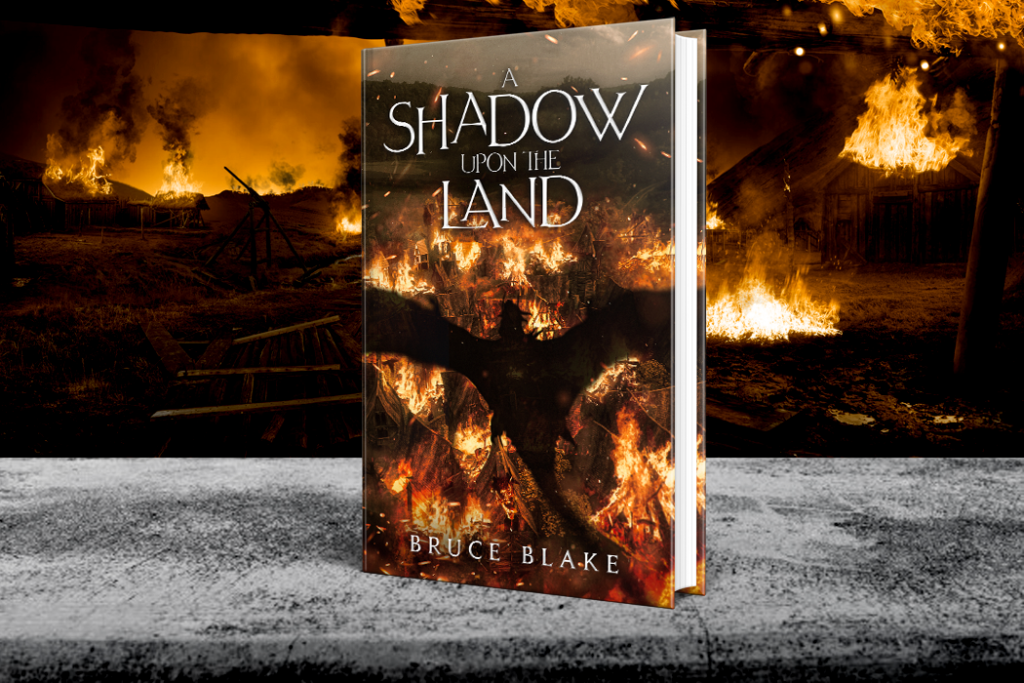 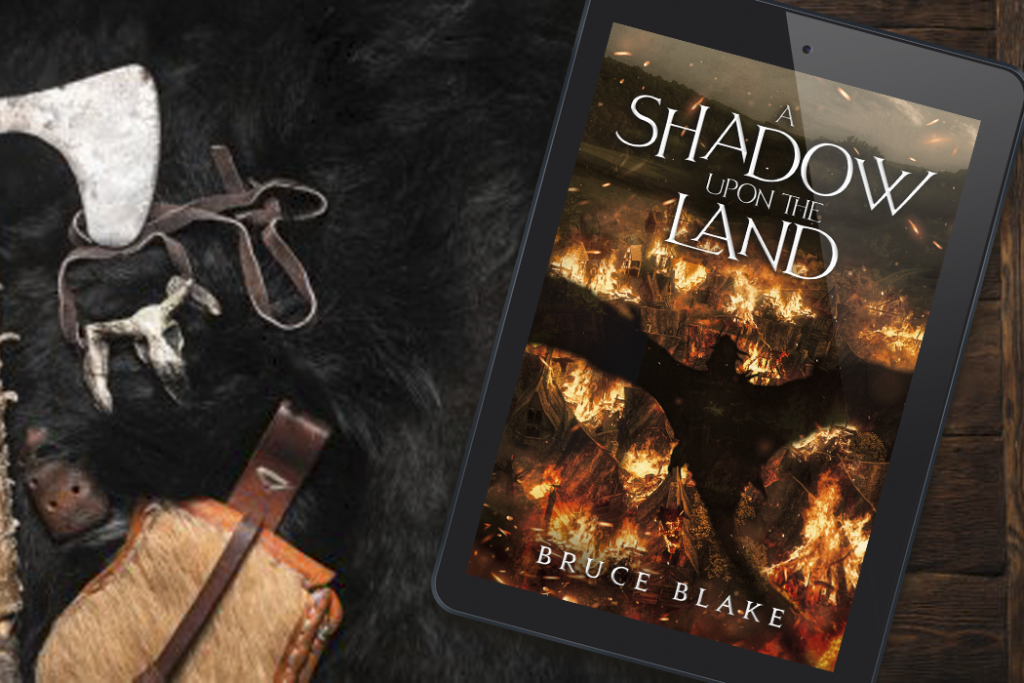 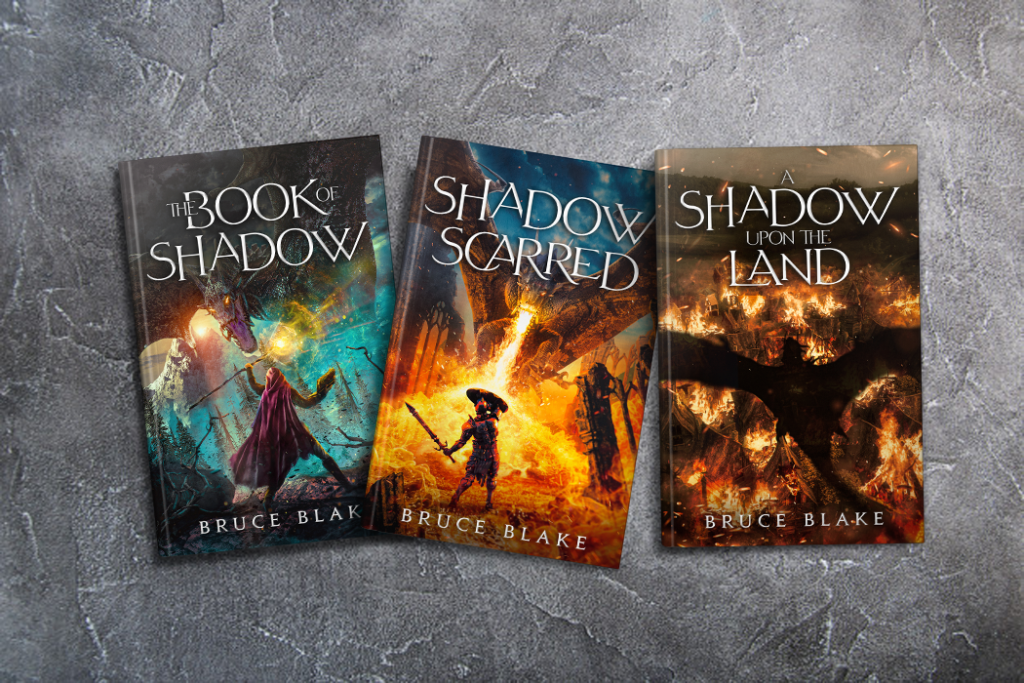 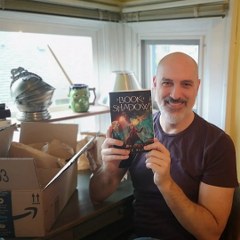 Bruce Blake lives in a small town on Vancouver Island in British Columbia, Canada. When pressing issues like shovelling snow and building igloos don’t take up his spare time, Bruce can be found taking the dog sled to the nearest cafe to work on his short stories and novels.Actually, Victoria, B.C. is only a couple hours north of Seattle, Wash., where more rain is seen than snow. Bruce is the father of two amazing humans and does his very best to keep a bearded dragon alive and healthy, though he doesn’t have much success at doing the same with house plants. He spends too much time work a traditional job and not enough time writing but hopes to change all that soon.

Like many writers, the genesis of my love for the written word begins in grade school. From the first story I recall writing (The Mystery of the Blue Marble—a sci-fi short in grade 5 that was strangely about a mysterious blue marble), the act of creating pictures with words filled me in a way nothing else before or sense. I wrote consistently right through graduation and into my early 20s until life, and my desire to be a famous rock and roll drummer, got in the way.

I didn’t return to writing until my early 30s. I wrote a few short stories, took some craft courses, and then dove into writing novels. My latest release, A Shadow Upon the Land (Curse of the Unnamed Book 3) is my fifteenth book and I constantly have several more floating around my brain encouraging me to write faster so they can see the light of day.

Where were you born/grew up?

I am Canadian and was born in Halifax, Nova Scotia. The middle child of a military man, I moved back and forth across the country a couple of times, having lived about equal amounts of times on both coasts before I graduated school and moved out on my own, land bound in Ontario by that time. There, I got the pesky desire to be a rock drummer out of my system before relocating to Victoria, British Columbia, where I have been lo this past quarter century.

What are you passionate About these days?

Outside of writing, I don’t tend to have a lot of passions. When one is as all-consuming as churning out novels, it doesn’t leave a ton of time for other things. I did, however, recently purchase an aquarium and start keeping fish. It started off with a small, 5 gallon job and a single Betta, but I soon thought he might be lonely, so I graduated him to a new, 20 gallon home. Now he has live plants in which to play, 2 neon and 6 ember tetras for company, a snail named Beau and 2 plecostomus (Frank and Sal) to clean his tank, and two dwarf frogs (both named Kevin because it’s impossible to tell them apart) to provide entertainment.

And now I have my eye on a 55 gallon tank so they can all have more friends.

Describe yourself in 5 words or less

When did you first consider yourself a writer?

I think I first considered myself a writer after I finished my first novel. More specifically, it was when my wife at the time read it and cried with relief when she got to the end because she didn’t have to tell me it sucked.

Dec 16
4covert2overt ☼ A Place In The Spotlight ☼

Dec 21
Books all things paranormal and romance
Momma Says: To Read or Not to Read

Dec 27
Inside the Insanity