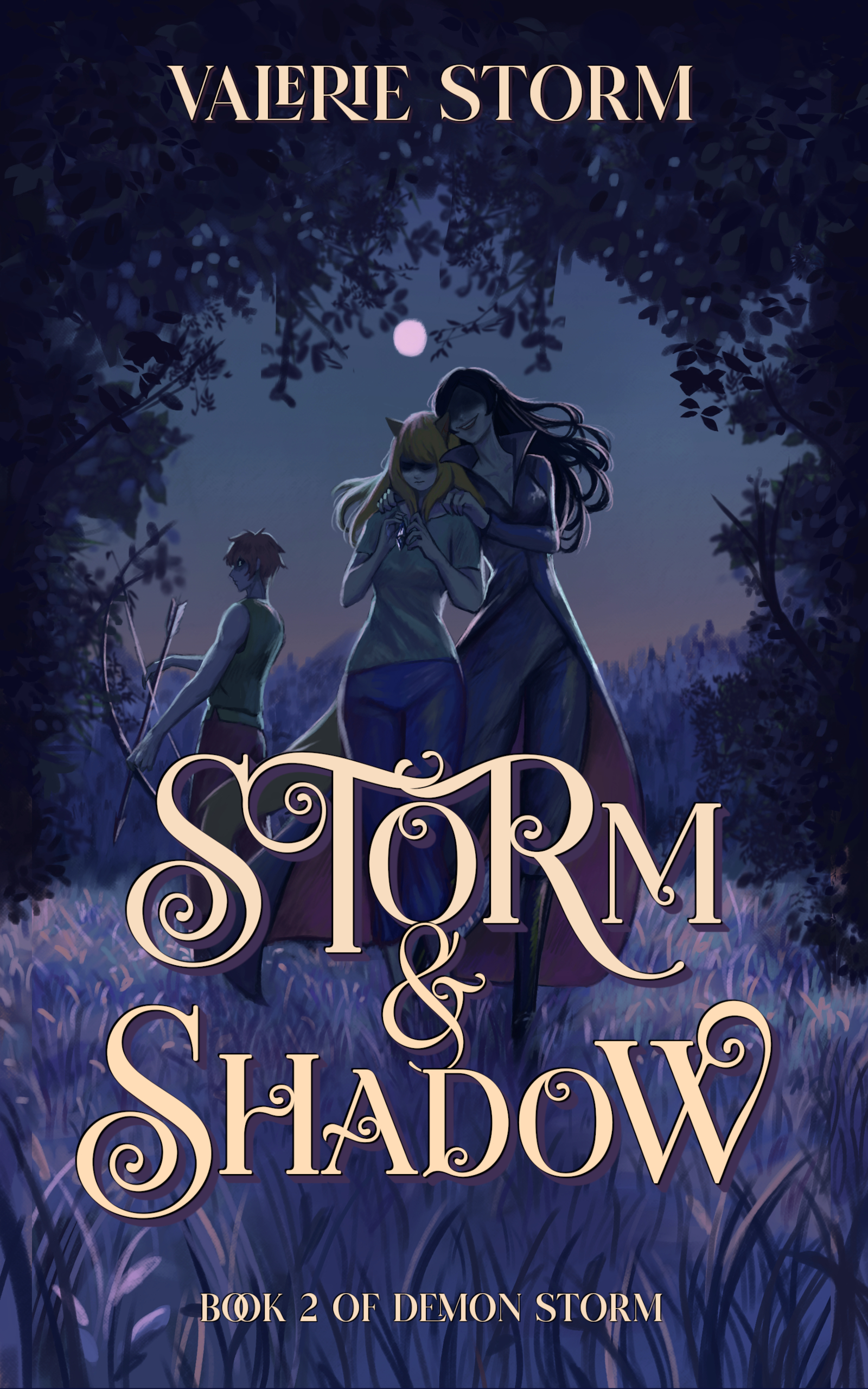 Kari was dead—and then, she wasn’t.

But for the wolf-demon with lightning in her fists, resurrection is no reprieve from exile. After old witch Zina revives her, Kari must conceal her true nature better than ever before, lest her slayers find her breathing and put her down for good. And since she can no longer return to what she once knew, Kari finds herself adrift—in search of purpose.

She gets it when Zina entrusts her with the Lapis Anima, a gem imprisoning the soul of wicked woman, Raven. This brings her into conflict with Raven herself, who’s still very much a threat without her soul… and has devious plans in mind for Kari’s destructive abilities.

Will the wolf-demon succumb to Raven’s cruel temptations?

Or will Kari turn to an unlikely ally for help—the very man who killed her, one year ago?

Sweat dotted Ari’s forehead, his cheeks reddened from the roaring blaze in front of him. His eyelids were heavy as they lifted, then snapped open as he noted the burial pyre. The flames reached high, ascending into billows of thick smoke. He was on his knees. The core of the pyre warmed his face.

When had it been lit? He looked down at his hands, but the torch rested on the ground. Had he lit it…then fallen asleep?

He looked up at Roland, who leaned on his walking stick. Beyond Roland stood the villagers, gazing around in a haze. They blinked and rubbed their eyes as if they, too, had just woken up.

He recalled something. Just before he lost consciousness, he’d felt something in the air. Some strange magic; loose, capricious, and his aura could not stand against it. He had tried to fight it…but…

Roland grabbed his elbow and pulled him to his feet. “All is well now, Lord Ari. I…can’t say what happened myself, either, but I have already checked everyone here. They are all fine and accounted for.”

Ari looked to the pyre. The bodies burned; the dead would be cleansed so their souls could go on to the afterlife.

Kari…she would not go on, would she? Demons did not receive penance in Nalmi as humans did.

He clenched his fists. I did what I had to. If I didn’t, she would’ve…

“I must write to Lucas at Angel Cross,” he heard himself say. “They will see the smoke. I do not want them to worry unnecessarily. And…” Ari glanced around at his people, helping each other stand, some gazing at the pyre, others already leaving. “We may need their aid.”

“Of course, Lord. Afterward…might I suggest we discuss all that has happened?”

Gods, he felt so tired. He rubbed a hand over his face and shoved his fingers into his reddish-brown hair. How he longed to disappear into a dark place, to hide away from the pain threatening to rip his insides apart.

She loved me. But no…if she had, she wouldn’t have done this. Would she? She was a demon, but she was different. So different.

So why? I saw her myself, and I wasn’t the only one.

He was not a child anymore. He could not flee from these feelings any longer.

Ari finished the letter to Lucas and sealed it before making his way to Roland’s temple. As he approached the doors, a woman exited, her face blotchy and red.

“Lord,” she whispered in a cracked voice.

Susan’s husband had been one to be placed on the pyre, and a child of hers as well. Ari’s breath burned in his chest.

She gave a short, sharp shake of her head. “Oh, no, Lord. No…nothing can be done now.”

She turned, leaving him in the shadow of the temple, where he belonged. With a sigh threatening to break him in half, Ari entered.

Roland was in his aviary. Ari nudged the door open enough to slip inside and let it fall shut behind him. He approached one of the Sage Hawks, but his fingers fumbled to attach the letter. Roland took over, tying string around the minuscule scroll with years of practice.

“What do I do, Roland?” Ari whispered as Roland finished. “Surely I have failed everyone here. I was the one who allowed her to stay. I…”

Roland shook his head. “There will be some who feel anger, as is part of grieving, Lord Ari. Their anger is not for you, but for the unfairness of the world. This was not your sole doing.”

Ari laid his hands flat on a nearby table and bowed his head. “How can it not be?”

Roland rested a hand on his shoulder. “We all loved her, Lord Ari. We all saw the light she brought to you, and our village as well. She was not someone who would do this.”

Ari raised his head. “What are you saying?”

Roland’s hand twitched before it fell. “I think it best we discuss this more later when it is less fresh. For tonight, I want you to humor me. As night falls upon this dark day, you are no longer lord.”

Ari turned as Roland released the hawk out an open window. “What?”

“You will pray and meditate with me. Not as lord, but as the man you are. Feel your turmoil, and together we will unravel it, piece by piece.”

They returned to the main temple and sat on the cold wooden floor facing each other. Together, their light outshone the candles lining the walls. Ari’s light was brighter, not only due to the birthright of his power but also because of the fury inside of him.

Why? He wanted to scream to the sky, to the woman who had lain dead at his feet. Why did you betray us all?

He couldn’t forget the screams of his people, the crackling of fire, nor the high, sharp laughter as Kari leapt from rooftop to rooftop, spreading flames as she went.

He forced himself to breathe. His light dimmed; he saw her face, moments before his sword had entered her gut. Not the distorted, cruelly-sharpened expression, but the wide eyes brimming with tears and pain. The mouth set and trembling, not sneering.

Why would someone with such a countenance do what she did?

That night, Ari lay awake. His bed was too vast and cold, his room too quiet. Had it been only a day and a half ago that she had lain here with him? Since he had curled his arm around her and pulled her close?

His throat burned; his chest felt so cold it was hard to breathe. He sat up and stared into the darkness.

Despite what he knew—what he had seen and heard—he could not forget Roland’s insinuation. She was not someone who would do this.

Of course, he would not have expected such insanity and cruelty of Kari a week ago. Even twenty-four hours ago, attacking his people was one of the last things fathomable. She was hurt and afraid, but she was not dangerous. She had proven that time and again.

But when she came back from the mountain that first time…she had spoken with him. When he was grateful to see her, she had spoken harsh words, her eyes aglow with scarlet light.

Kill me, Lord Ari. Kill me, or more will die.

She had kept her promise. While he stood frozen in disbelief, she destroyed buildings and hurt people. Her cackle had filled the air as his people screamed and fled. When he finally gathered the courage to ready his bow, she escaped into the forest.

Inevitably, she returned, as all demons do. Perhaps she would have finished the job, or perhaps Roland’s suggestion had a kernel of truth. Maybe Kari’s final pleadings were not false.

Regardless, Ari did what he thought he had to do. And now Kari was dead.

He dropped his head into his hands and allowed the flames in his throat to overcome him as he wept. 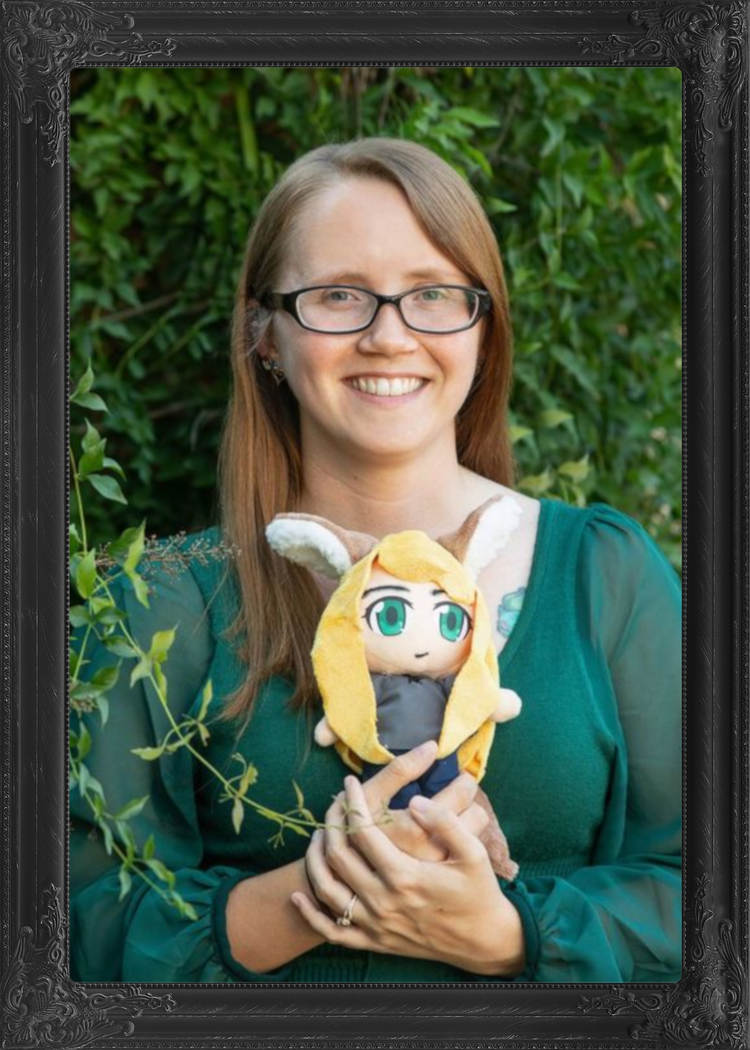 Valerie Storm was raised in Tucson, Arizona. Growing up, she fell in love
with everything fantasy. When she wasn’t playing video games, she was
writing. By age ten, she began to write her own stories as a way to escape
reality. When these stories became a full-length series, she considered the
path to sharing with other children & children-at/heart looking for a
place to call home.