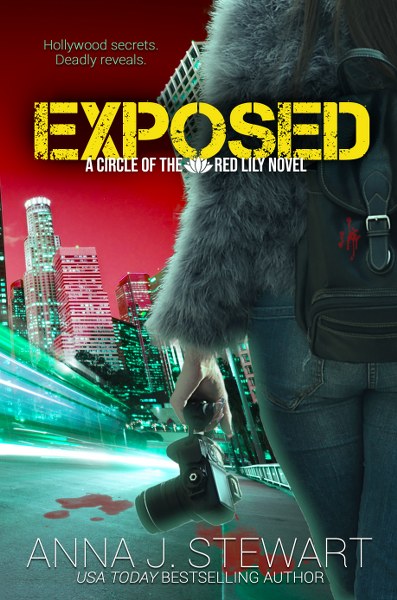 Circle of the Red Lily Book 1

Some secrets should stay buried…

Working as a Hollywood photographer means Riley Temple has seen it all, but that theory is put to the test when she finds herself staring at the chilling image of a dead woman. When her questions about the film’s origin results in an assault, a murder, and an attack on Riley herself, she finds herself reluctantly turning to the only person who assures her he can help: Detective Quinn Burton. Her history with the LAPD is complicated, but to find those responsible for harming her friends and to protect those closest to her, she’s willing to do anything. Even trust a cop.

After more than a decade on the job, Quinn Burton knows a dangerous situation when he sees it and Riley Temple is neck deep in trouble. But not for the reason she thinks. Those pictures she stumbled onto could very well overturn a notorious murder conviction–a conviction partially secured by Quinn’s own police commissioner father. Quinn has always prided himself on being loyal, but seeing this case through means he’ll have to betray someone: his job, his family, or the woman he’s falling in love with.

As Quinn and Riley’s relationship deepens, their investigation reveals the false conviction is only a small part of a much bigger conspiracy. They soon find themselves targeted by The Circle of the Red Lily, a secret society that for decades has maintained influence and violent control over Hollywood’s powerful elite. A group that, until now, has remained hidden in the shadows.

A group that will stop at nothing to keep their secrets buried. 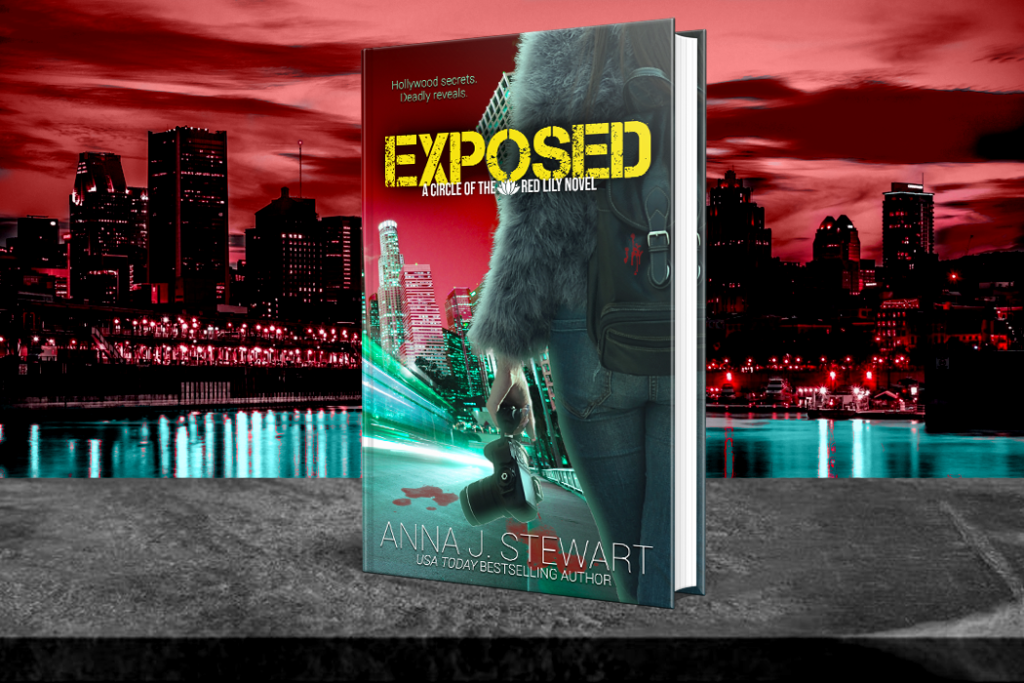 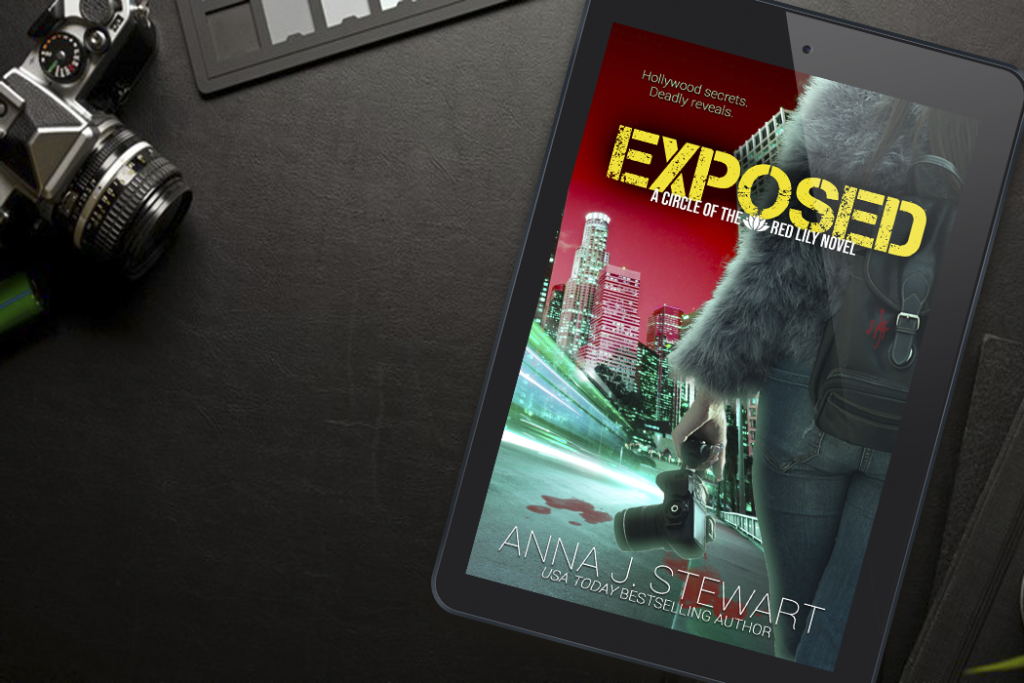 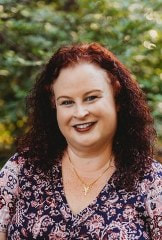 A geek at heart, USA Today and national bestselling author Anna J Stewart writes “refreshingly unique, quietly humorous, and profoundly moving romance.” (RT Book Reviews) Her books include The Butterfly Harbor series for Harlequin Heartwarming, along with the Blackwell continuity series. She also writes the Honor Bound series for Harlequin Romantic Suspense and has written in the ongoing Colton family saga. As her first love is paranormal romance, she’s published a number of novellas, including the Tome Wardens trilogy collection. EXPOSED, her first book of The Circle of the Red Lily romantic suspense series with CAEZIK Romance will be released in November of 2022. Readers can get a taste for what’s to come with her Nemesis Files Trilogy (light romantic suspense), available on audio through Scribd.

Anna lives in Northern California where she deals with a serious Supernatural & Jason Momoa addiction, surrounds herself with friends and family and tolerates two devious cats named Sherlock and Rosie.

I was so lucky that ArcManor, a smaller publishing house that until recently acquired science fiction and fantasy, wanted to branch out into romance. I’d written some short stories for one of their magazines, but when they established CAEZIK, their romance line, they asked if I’d be interested in writing a full-length romance novel for them, preferably a series. Even better, they asked “what do you want to write.” The only caveat was it couldn’t be paranormal (*sobs*). So I pitched this book as LA Confidential meets Women’s Murder Club. They bought it and the other four books in the series.

What can we expect from you in the future?

More romantic suspense! As I said, EXPOSED is the first of five books—the ongoing mystery will be resolved at the end, and each book features a different couple. I’ve also got a new sweet Hawai’i-set contemporary series from Heartwarming that will launch in June of 2023 and the last of my Honor Bound books from Harlequin Romantic Suspense will be coming out as well. I’ve also got a brand-new out of the norm idea percolating in the back of my mind that I hope I’ll be able to do something with. I just need the time to focus on it!

The idea came as a result of an episode of White Collar, actually. One of the secondary characters, Mozzie, bought a storage unit that had been abandoned and inside he found a ton of photography equipment. My brain just went into over-drive and I wondered what would happen if there was undeveloped film in that unit? That’s where the story began for me. What kind of character would develop that film and, more importantly, what would be on it.

The two characters developed as they often do as far as their professions and situations: they need to conflict in numerous ways so they have to grow and change and earn their HEA. Putting Riley Temple, for example, with a cop, lent itself really well after I fleshed out her backstory. He’s literally the last man she’d ever imagine ending up with.

Where did you come up with the names in the story?

Character names in this series, and for EXPOSED in particular, are kind of Easter eggs. All of the heroes and heroines tie their names back to classic Hollywood actors and actresses. Riley Temple, for example, is in homage to Shirley Temple, one of my favorites growing up. Quinn Burton is a mix of Anthony Quinn and Richard Burton. I literally wrote out a list of all my favorite actors and actresses and started mixing and matching.

What did you enjoy most about writing this book?

So many things. First, that my editor literally said, write what you want, how you want. The only caveat was that it needed to be romance (which is a no brainer for me—everything I ever write will be romance, LOL). Secondly, that I got to bring in my love of classic Hollywood and the Golden Age. Growing up I was obsessed with the studio system and stars like Marilyn Monroe and Veronica Lake. I’m really enjoying dropping information about that kind of thing onto the page. Beyond that, just creating the entire world of Temple House and the people who live there. I love creating communities that are more family than they are strangers or even friends.

How did you come up with the title of the book?

In an unusual way for me, the title actually came before the real plot developed. I don’t plot out my books, but as I was working on ideas and I played with the photography, movie, and secrets theme, I started brainstorming out one word names I thought would catch. EXPOSED just fit so many aspects of the story that as soon as I tried it, it stuck.

Who designed your book covers?

For the Circle of the Red Lily books, it’s the fantabulous AUTHORS ON A DIME. I loved working with her as she really listens to me but also thinks outside the box.

Did you learn anything during the writing of your recent book?

Yes. I learned that I really really like writing dark plots and scenes. I also got to start doing a deep dive into the inner workings of the studio systems of Hollywood back in the 40’s and 50’s.

If your book was made into a film, who would you like to play the lead?

I don’t always choose inspiration pictures to refer to while I write, but I actually did for this one. I can see Keira Knightly as Riley Temple—sans the accent, of course. Someone who appears slight, but is unbelievably strong. As for Quinn Burton—it’s Chris Evans all the way—about half-way between his beard-and-non-beard phase of Captain America.

What is your favorite part of this book and why?

I have a few favorite parts, actually. Firs tis the prologue, which I think might be one of the best things I’ve written in years. Secondly are the scenes that feature the core group of heroines—five best friends who join forces to solve the mystery of this series. Five completely different women all on the page at the same time. Those are always my favorite kinds of scenes to write.

Are your characters based off real people or did they all come entirely from your imagination?

Do your characters seem to hijack the story or do you feel like you have the reigns of the story?

All the time. Especially the secondary characters who will have their own stories down the road. Laurel in particular in EXPOSED was difficult to control, probably because I’m so anxious to write her story And I have to wait until the final book to do it!

Have you written any other books that are not published?

Oh, heavens yes. I’ve got a number of paranormal romances that have yet to see the light of day. I came close with one of them, but it was just a bit too far out of the norm box for a publisher to take a chance on. All of those are parts of series that I’ve thought about turning into maybe a YA series or even connecting all them into one world and self-pubbing but… Who knows?

What did you edit out of this book?

Actually, nothing. Everything I wanted to put into it is in there.

Fun Facts/Behind the Scenes/Did You Know?’-type tidbits about the author, the book or the writing process of the book.

The idea of Temple House, the apartment building owned by my heroine Riley and her great-aunt (a former actress from the golden era) came from the old apartment buildings studios owned back in the day to house the film extras and chorus girls.

I’m learning all the secrets of this series with the readers! Like I said, I don’t plot, so when it comes to all the questions being asked in these books? Yeah… I don’t have the answers until they hit the page!

The character of Laurel Fontaine is 100% based on actress Angie Harmon of Rizzoli and Isles fame. I adore her so much I put her in my books!

Nov 25
Book Reviews by the Reluctant Retiree
Bedazzled By Books

Dec 9
eBook Addicts
Inside the Insanity

Dec 12
Insane Books
Momma Says: To Read or Not to Read