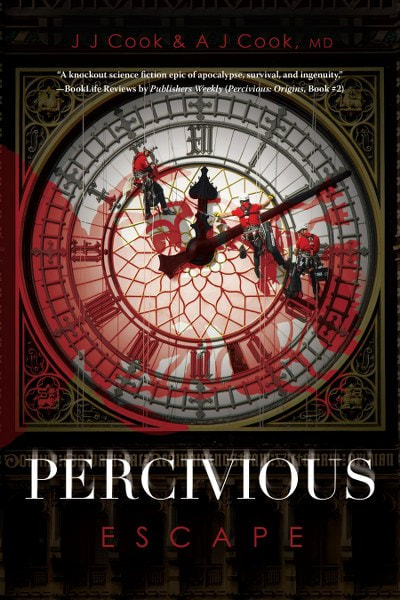 Who will survive when the future can only be saved by the past?

A vicious insomnia pandemic devolves into a devastating apocalypse, and humanity teeters on the brink of extinction in the thrilling final installment of the Percivious Trilogy, Escape.

Emerging from the dark side of the moon, the HELIX and its crew embark on a desperate effort to save the last of their species—and ours.

An unexpected alliance forms between humans and the XYZ—Earth’s first intelligent hominid species—to stop the pandemic once and for all. But when unforeseen forces surface, Herriden, captain of the HELIX—which carries the last of the cetacean XYZs—must make an unfathomable choice, if it’s not already too late . . .

Percivious: Escape is an astonishing conclusion to the Percivious Trilogy, in which life as we know it will never be the same. 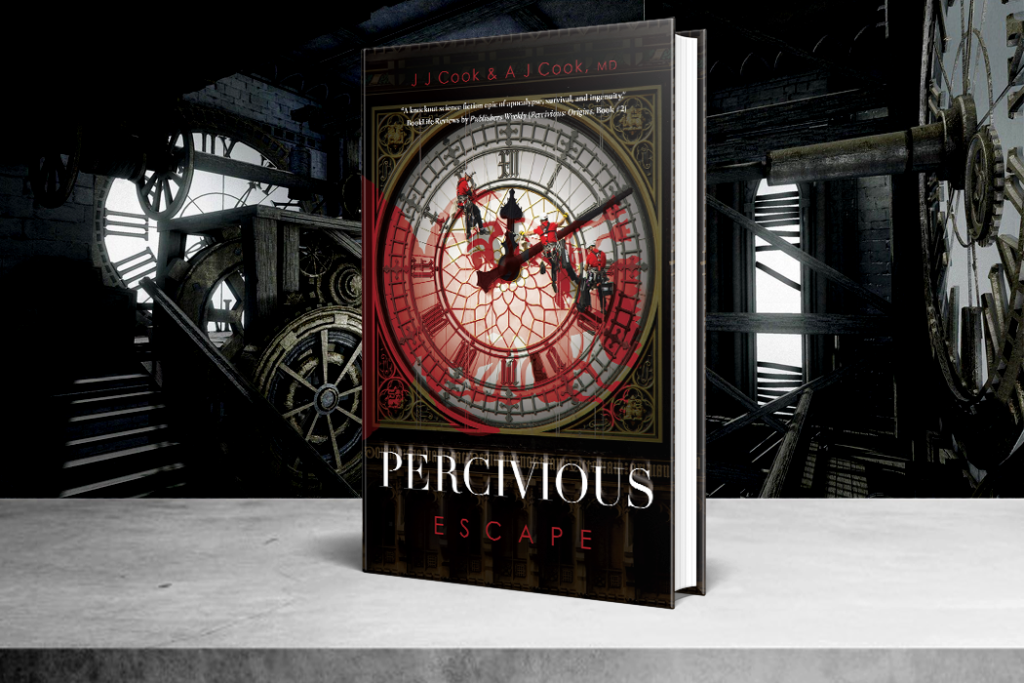 They had started to just go along with it. The kids. They had been quicker to adapt to the exhaustion. What was at first but a blip in their well-imagined world had become the new “normal,” and they waited more patiently now, after months of tantrums, having forgotten how it was before. Now they were resigned to the fact that their parents just couldn’t do any better; they simply had no more to give.

His practiced hands shook with her safety belt. His mind was elsewhere. Still clinging to the smallest shred of hope that they would one day return to a life laced with discontent and dissatisfaction. A life that seemed a mirage now when compared to the insomnia-ravaged existence the world begged relief from. He thought he heard a click. But it was muffled and distant. The insomnia had gradually worn away his once-sharp senses and replaced them with cloudy, condensed versions of themselves that refused to fully come to life at his command.

The car drifted down the familiar route, late for preschool yet again. He needed to change lanes to make his exit, as he had done hundreds of times. It had become a reflex, a turn he took subconsciously. But with reflexes that no longer responded on time and eyes that now offered the equivalent of a side mirror’s perspective, he waited far too long. And as the garbage truck rear-ended the sedan and the airbag erupted against his chest, crushing his arm and simultaneously burning his flesh, his sleepy mind did not register his daughter’s screams as she was catapulted against the back of his seat. Her seatbelt, not securely fastened, failed to save her from the force of the impact, powerful enough to snap her tiny neck at nearly one hundred thirty kilometers per hour, immediately stifling the last time she would call “Daddy” at three years of age.

The Audi’s dashboard continued to blare the dismal daily news despite the blow. A newscaster urged listeners to never mind car accidents, as it was plane crashes that brought about mass-scale devastation on a daily basis. But the official reports were of isolated incidents, and there was always an explanation. To a talk show guest who was heartsick at her children not having seen their grandmother in over eighteen months and the compounding pressure she felt to visit, one last time, while there was still a chance, the guilt felt like a crushing tsunami on the shoulders of a daughter who had moved clear across the country. How could she hope to explain the situation to her mother struggling with sleep deprivation that had paved the way for early onset dementia? How could she possibly help her to understand that now there were simply no flights left, that all but the emergent were cancelled? Now she would be forced to gather the extended family for what would undoubtedly be another tear-filled video conference with Grandma’s hand up against the screen for the closest thing to contact with her beloved grandchildren she was allowed. Although none of the airlines would admit to it, the cancellations had been forced because the air traffic controllers and pilots could no longer function reliably due to their long shifts and trips through multiple time zones combined with the effects of the insomnia. As a consequence, the airlines could no longer guarantee the safety of any passengers. Which translated to the price of potential casualties rising past the acceptable level of corporate risk.

All of these changes were only relevant if the once-safe, now-dangerous forms of transportation had gas. Which had been erased as an option for countries that could not produce their own. Beyond the frustrating lack of fuel was the sister pandemic of drilling disasters that had resulted in hundreds of deaths of offshore crewmembers—mothers, daughters, fathers, and sons—who would never return to shore. These operators, already well versed in the practice of sleep deprivation, thanks to the grueling shift work they were subjected to, suffered the most. This, alongside the wave of insomnia, left them delirious, unable to make critical decisions and unable to recover. In addition, the resulting devastation to the environment, particularly the oceans, as a result of the oil spills, had been catastrophic. And the size of the resulting damage made the Exxon Valdez a glass of spilled milk by comparison.

One of the few remaining ambulances available, complete with two tired and traumatized EMTs, delivered the distraught father and his unresponsive three-year-old daughter to the emergency room and into the care of an exhausted medical resident nearly finished with her twenty-four-hour shift. It was with tears in her eyes, yet relief in her heart, that she delivered the news to the father that his little girl was gone. While she would have done everything in her power to save the child, she was quietly grateful she wouldn’t have to, because the number of medical errors she had almost made over the last twenty-three hours had her fearful for her patients’ lives in her own hands.

Instead, she placed a gentle palm on the shoulder of the father who held his dead daughter’s tiny hand in his own as she lay stiff, still on the ambulance gurney. He was unable to stop the shaking heaves of grief that stole his breath and dislodged a year’s worth of pandemic-induced tears he had fought so hard not to let fall. They cried together over the loss of the little one. A loss that should have never happened—was senseless—but was all too soon becoming inevitable for them all as they faced a storm of insomnia that seemed only to be picking up in speed. 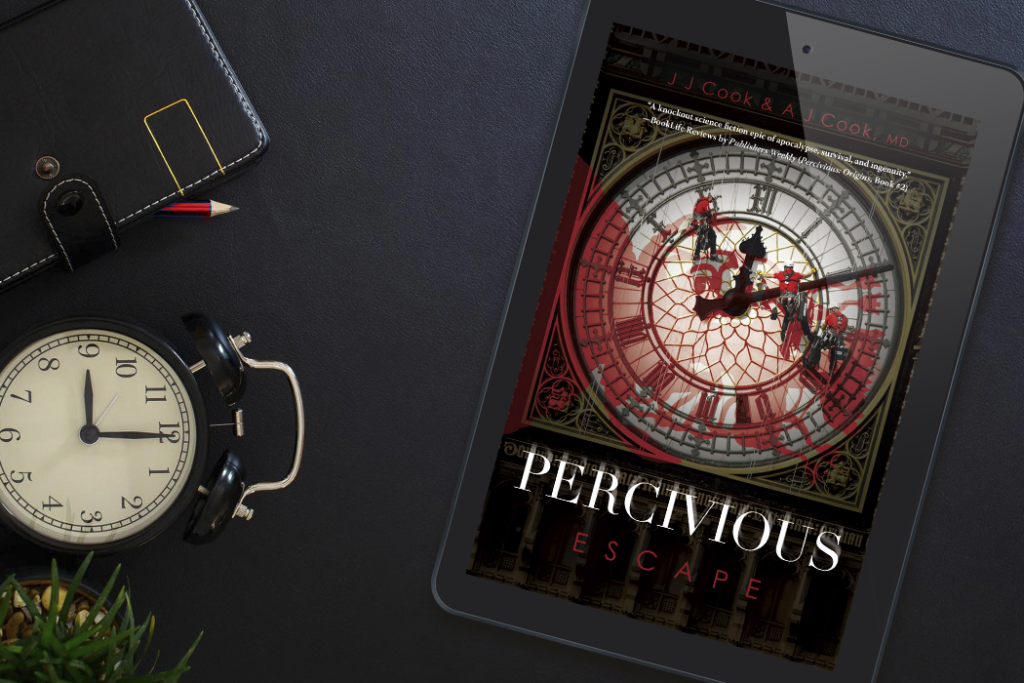 **Don’t miss the other books in the series!** 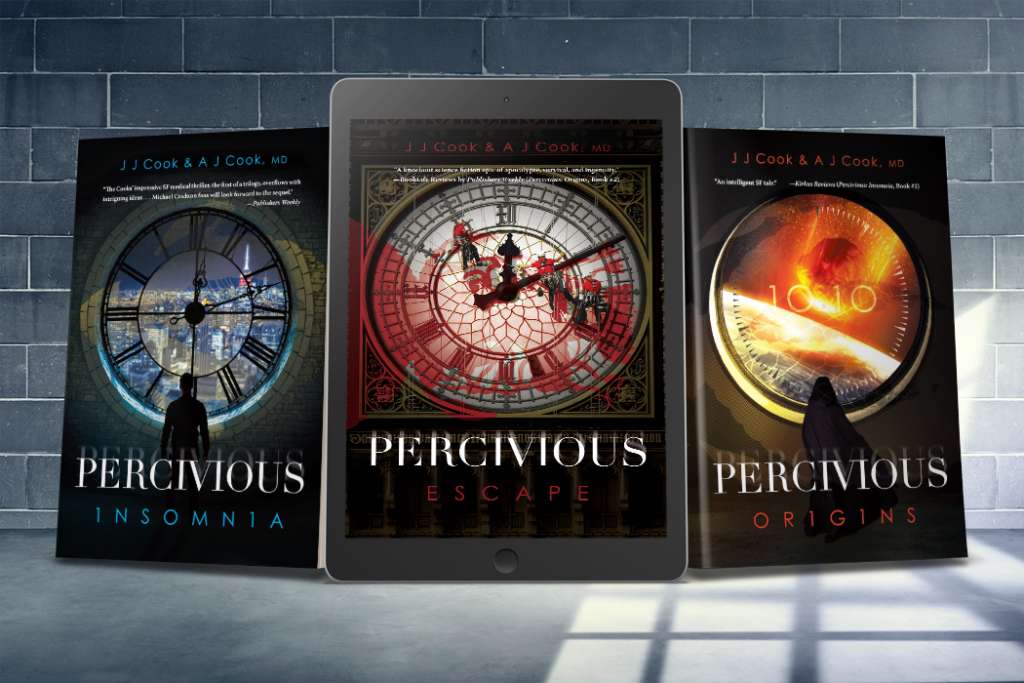 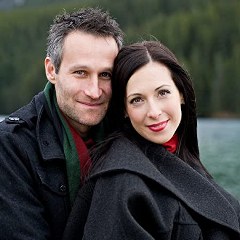 J J Cook’s background in marketing across a spectrum of industries—technology, finance, and the arts—brings insight and depth to characters spanning an array of disciplines, ages, countries, and cultures.

AJ COOK, MD’s current role as chief of pediatric urology at the Alberta Children’s Hospital has allowed him the opportunity to author and contribute to numerous published studies, honing his writing skills, while his experience as a surgeon — as well as the relationships he’s developed with his young patients and their guardians — has contributed credibility and realism to the narrative.

They attribute the creation of the Percivious trilogy not only to the marriage of their unique skills and perspectives, but also to their marriage of each other.

Question: The Percivious Trilogy is a bit of sci-fi, a bit of a medical thriller, and also a romance, how do you straddle these genres?

Cooks: We like to think of the trilogy as genre defying. While it is fair, and I suppose most appropriate to consider Percivious Insomnia a medical sci-fi story we deliberately did not shy away from writing across a variety of genres as the trilogy demanded. We don’t live life in one genre so in our opinion our story should not be restricted to one either. In Percivious Insomnia as well as Percivious Origins the reader will experience sci-fi, action, mystery and big-screen romance. It was our goal to pen a tale that would appeal to a large number of readers regardless their age, gender or literary preferences, and straddling a variety of genres became part of the equation. Having said that, I feel that Percivious Origins falls predominantly into plausible sci-fi and potentially speculative fiction.

Question: You’ve said that illuminating issues of climate change with your writing is very important to you, please explain.

Cooks: We found ourselves contemplating how a story can bring us together on this planet as a society and as a species. It would be the greatest failure imaginable to destroy this planet before we discover what it is capable of. We were well into the writing of Percivious Insomnia, nearly finished, when the idea for Percivious Origins took hold. It was one of those epic quiet evenings when the arc for the rest of the trilogy, not just Percivious Origins, came to us. Inspiration struck from a number of sources not the least of which included our affinity for nature and specifically our love of the planet, the ocean and its creatures, most predominantly the whales that inhabit it. We have spent countless hours researching these magnificent animals that share the planet with us and it was their culture and emotional capacity that inspired the creation of our XYZ characters introduced in Percivious Origins. The plot of book 2 was also inspired by recent proof of black holes and the importance of the connection we have to the universe, the earth, but most importantly, ultimately, to each other.

Question: What is it like to write as a husband and wife team?

J.J. Cook: Arguably, Percivious Origins was more charged with “debates” we affectionately now call “doozies” thanks to their increased frequency during the writing of book 2. I had a revelation while writing Percivious Origins. You can think you know someone, especially your partner, only to be surprised, yet again. Agreeing to write sci-fi, which wouldn’t have been the path I would have set out on had I been writing on my own, seemed exciting initially. AJ, a huge sci-fi fan, would ensure that the science was solid which would enhance believability so that the characters and the story would be guaranteed to stay front and center. How hard could it be? The only thing was, and I learned this in the very early days of writing Percivious Origins, that he is more than just a sci-fi fan, he is a science fan and I was very quickly drowning in the vastness of space – terms, physics and ideas I knew very little about. It was a humbling experience and to be honest one I would have rather avoided. But, this story, Percivious, is one that haunts us and the characters would not let me go. So, we persevered through time, space and countless doozies in order to finish the novel which in my opinion is the heart of the trilogy.

J J Cook’s background in marketing across a spectrum of industries—technology, finance, and the arts—brings insight and depth to characters spanning an array of disciplines, ages, countries, and cultures.

A J Cook, MD’s current role as a pediatric urologist and director of fellowship education at the Alberta Children’s Hospital has allowed him the opportunity to author and contribute to numerous published studies and hone his writing skills, while his experience as a surgeon—as well as the relationships he’s developed with his young patients and their guardians—has contributed credibility and realism to the narrative.

Percivious Insomnia is available on Amazon.

Percivious Origins is available on Amazon.

Percivious Escape will be available on Amazon on November 8, 2022.

Nov 8
4covert2overt ☼ A Place In The Spotlight ☼

Nov 21
Books all things paranormal and romance
The Book Dragon