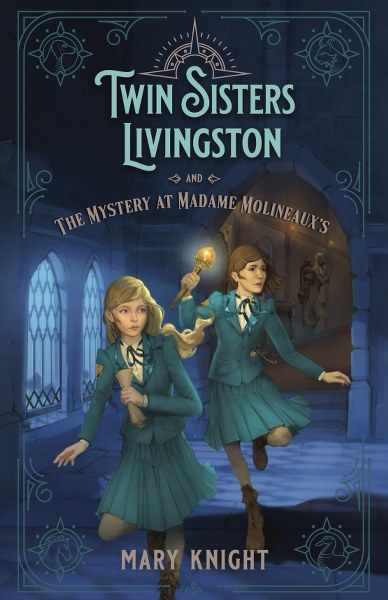 Twin Sisters Livingston and the Mystery at Madame Molineaux’s

Twin sisters Maddie and Jo Livingston have spent their lives traveling the world with their famous archaeologist parents. But when the Livingstons’ work takes them on a mysterious year-long excavation in Siberia, much too dangerous for two twelve-year-old girls, Maddie and Jo are whisked off to a castle in Switzerland, where they find themselves piecing together a mystery of their own.

Madame Molineaux’s School for Girls is filled with interesting students and professors from all over Europe. But it doesn’t take long for the girls to figure out that this is no ordinary boarding school: bizarre animals, hidden tapestries, secret tunnels, and a long list of unanswered questions keep Maddie, Jo, and their new friends searching for clues around every corner. Where is that snotty Rosemary Byron going when she sneaks out of her dormitory at night? What secret is their beloved headmistress trying to protect? Who is concealing treasures in the unlikeliest of hiding places? The girls must put all these strange pieces together to discover the staggering truth, and to save their school before Madame Molineaux’s closes its doors—for good! 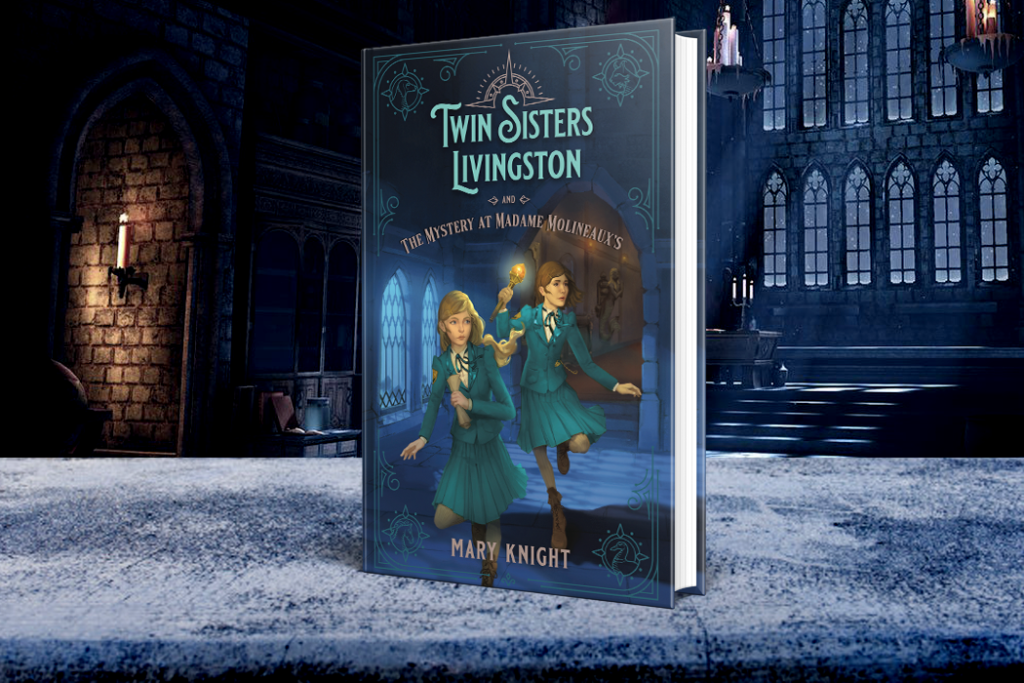 ​“This is where I bid you goodnight, ladies,” the headmistress whispered with a kind smile. “My chambers are at the very end of the hallway, and should you need me during the night, just knock and I will answer. The moon should give you enough light to change and get into your beds. Just remember, don’t wake the other girls. I’ll wait outside the door until I don’t hear any noise at all, and then I’ll leave.” She opened the door, waited for Maddie and Jo to step in, and shut the door behind them.

Maddie squinted until she could make out two beds that were still made near the window. She took her sister by the hand and led her toward them, careful not to make a sound. The soft breathing of the other girls in the room could be heard easily now. Looking behind her, she could still see the headmistress’s shadow underneath the bottom of the door.

Jo took one look at the tiny beds and shook her head no. She sat on top of her bed and popped back up, having sat squarely on something concealed under the covers.

“Shhh! What is it?” Maddie breathed to her sister, afraid she’d already been too loud. The last thing she wanted was for the headmistress to come back in and scold them.

Jo reached under the covers and pulled out a stuffed animal—a soft, pudgy hedgehog. Maddie checked her own bed to make sure she had one, too, and indeed, the same plush toy was tucked under her blanket. The girls gave each other sheepish grins, but they were glad to have something to hold on to as they slept, no matter how long it had been since either one of them needed a stuffed animal to fall asleep.

They changed into their nightgowns, folding their dresses neatly and placing them under their bedside tables. Maddie slid under her covers and let her head fall straight back on the pillow. She held her hedgehog tight against her chest and turned to look at her sister.

Jo was finishing her third glass of water, almost draining the pitcher completely. She kicked around under her sheets to get comfortable, and the bed springs gave a weak groan under her fidgety legs. She settled in and flipped onto her stomach.

Both girls watched as the shadow of the headmistress’s feet under the door grew longer then disappeared, and the room fell silent.

But the stillness lasted for only a few moments. Against the far wall, Jo saw someone sit up in bed.

Jo was too terrified to speak and lay paralyzed under the covers. She wasn’t even able to turn to her sister, who was quietly panicking in the next bed.

Maddie’s breathing quickened as she watched whoever was sitting up in the bed start bouncing up and down in a clock-like rhythm.

“Twenty!” another voice breathed in a high pitch, almost squealing. This girl began to bounce in unison with the other one, and two more beds sprang to life, their inhabitants on all fours like wild animals.

“Cre-e-ak . . .” one of them uttered. The silence that followed was interrupted by a distant creak from somewhere down the hallway.

“Click!” the other one said, and once again, the same sound was heard from down the hall, just audible to the girls. A quiet commotion filled the dormitory room.

The four residents scattered, jumping out of their beds and rummaging around. Maddie sat up awkwardly, and in a desperate attempt to find the lamp, knocked the empty water pitcher onto the floor. It hit the wood with a loud clang, interrupting the padded footsteps and whisper-soft ruckus.

Not a moment later, a brilliant orange light was inches away from Maddie’s nose.

“Quiet, or she’ll come back,” uttered a low voice with a French accent.

A torch-shaped flashlight was held steadily in Maddie’s face, as if it were a sword keeping a dangerous opponent at safe distance. Jo was enchanted by the colors—it glowed different shades of orange and gold, and reminded her of a big Christmas tree light.

The three other girls now crowded around the Livingston sisters’ beds, waiting to see what would happen next. The girl with the flashlight stepped back several paces and positioned the orange flame under her own chin.

“We’ve been waiting for you,” she said. 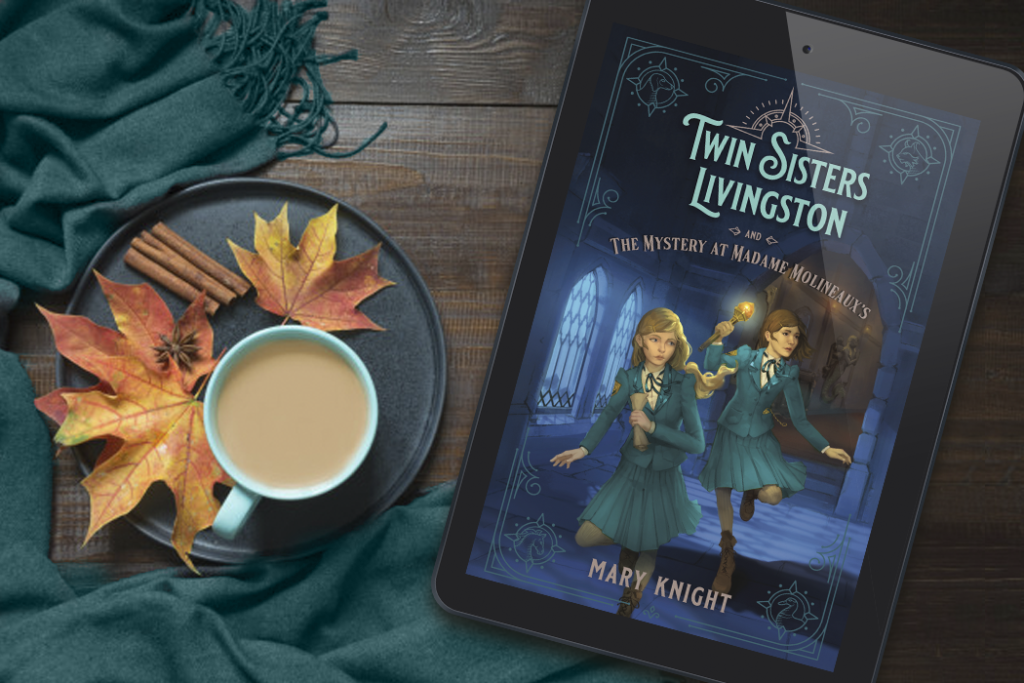 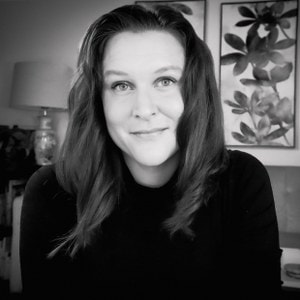 Before she started writing the Twin Sisters Livingston series, Mary studied International Affairs and foreign language at Georgia Tech. After almost a decade as a musician, waitress, and paralegal, she fell into the exciting world of tech startups and developed her entrepreneurial skills.

But how to write books and start companies at the same time? Mary merged her two passions to create the Twin Sisters Livingston brand of stories and Living Lantern Media Group, a company devoted to entertaining, educating, and inspiring girls all over the world through smart, safe, sophisticated media. She lives in Georgia with her two kiddos and a couple of rascally cats.