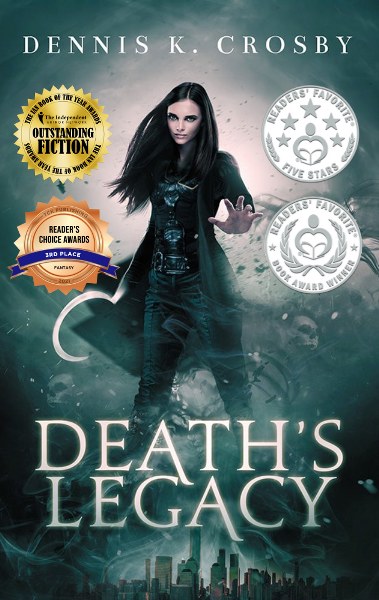 Twenty years ago, Reaper of Souls Kassidy Simmons battled Azra-El, the Angel of Death and won—or so she thought. Now, a number of strange and unexplained deaths are afflicting Kassidy’s quiet New York town.

She wishes she didn’t care. But she does. Her empathic abilities are expanding beyond her control, and the intense emotions are tearing apart her relationships. They’re also degrading the magical wards put in place to protect her from other Reapers and the even deadlier Wraiths—onyx-eyed henchmen of Azra-El.

Allied with her longtime mentor and a college professor with ties to her past, Kassidy learns that the untimely deaths are regenerating Azra-El, and that the only way to stop him is with the Scythe of Cronus, the legendary weapon of the God of Death.

To save her loved ones and reset the natural order, Kassidy must journey home and confront a past she’s been running from for two decades. She’ll face-off with enemies, old and new, and through a haze of fear and addiction, Kassidy will learn the secrets of her heritage, and challenge head on the one being she fears most—herself. 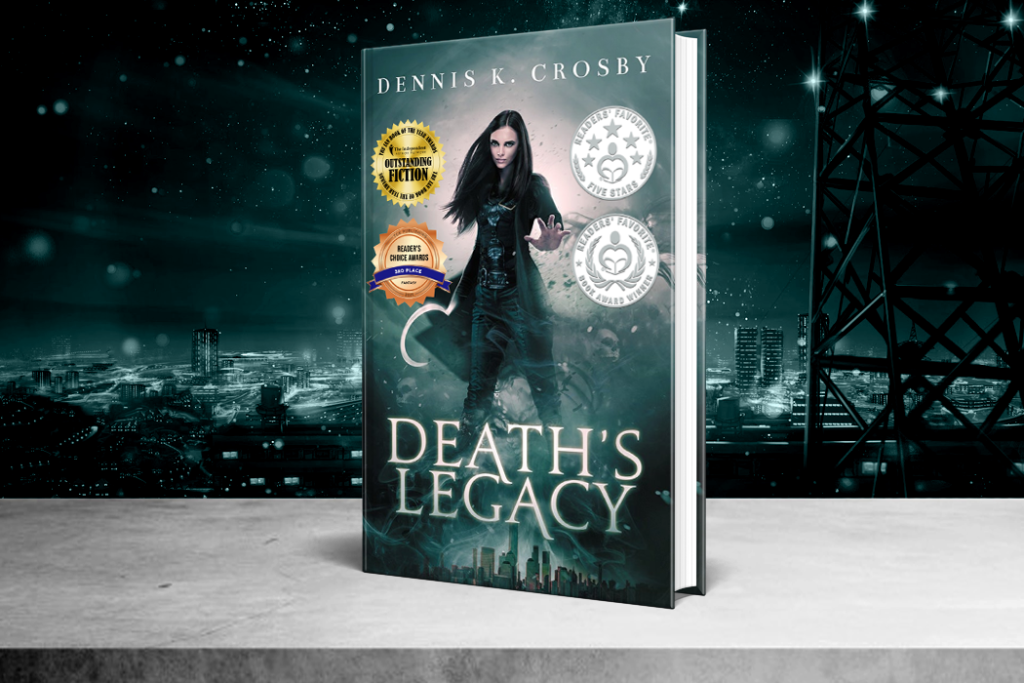 Kassidy stood over the kitchen sink and stared outside at the kids playing. The young girl who’d been teased was now the center of attention.

In the distance, well beyond the kids, a dark spec loomed closer, just as it had this morning. Another Wraith. It moved with speed; a sense of urgency as unnatural as the being itself. It flew through the park, past the kids, and directly toward Kassidy’s townhome.

She stood still, almost lifeless. She tried to steady her breathing. Calming her heart was something she’d once done with regularity. She had long since lost that skill. Looking down, Kassidy watched her shirt move in rhythm with her heartbeat.

The Wraith came to an abrupt stop in front of Kassidy’s kitchen window. It hovered for a moment and then changed shape, transforming from a shapeless patch of smoke to a dark demonic figure clad in a tattered, hooded robe. It scanned left to right, moving slightly with each turn of its head. It could not see her still. Yet somehow it knew she was there. Its head phased through the double-pane glass of Kassidy’s window and stared directly at her.

Kassidy stood motionless, breathless, the only sound and movement the overworked muscle in her chest. In her mind, she heard the voice of the apparition.

“You should just show yourself. We already know you’re here. Your warding is degraded. Your power is growing. Surely you can sense the changes happening around you. He’s coming, Kassidy. We are coming . . . for you. See you soon.”

If Senaya was here, Azra-El would not be far behind. The Wraith backed away from the window, its head phasing through again. Once clear, it lingered for a moment before shooting straight up into the sky. Kassidy followed its movement until it was out of view. Her emotions rolled like a tidal wave. The pressure building inside needed a release.

Kassidy screamed louder than she’d ever screamed before. She pounded the countertop with both fists, lashing out like a petulant child. Her rage seemed unending, but also futile. She slid down to the ground, brought her knees to her chest, wrapped her arms around them, and wept.

He’s coming for me. 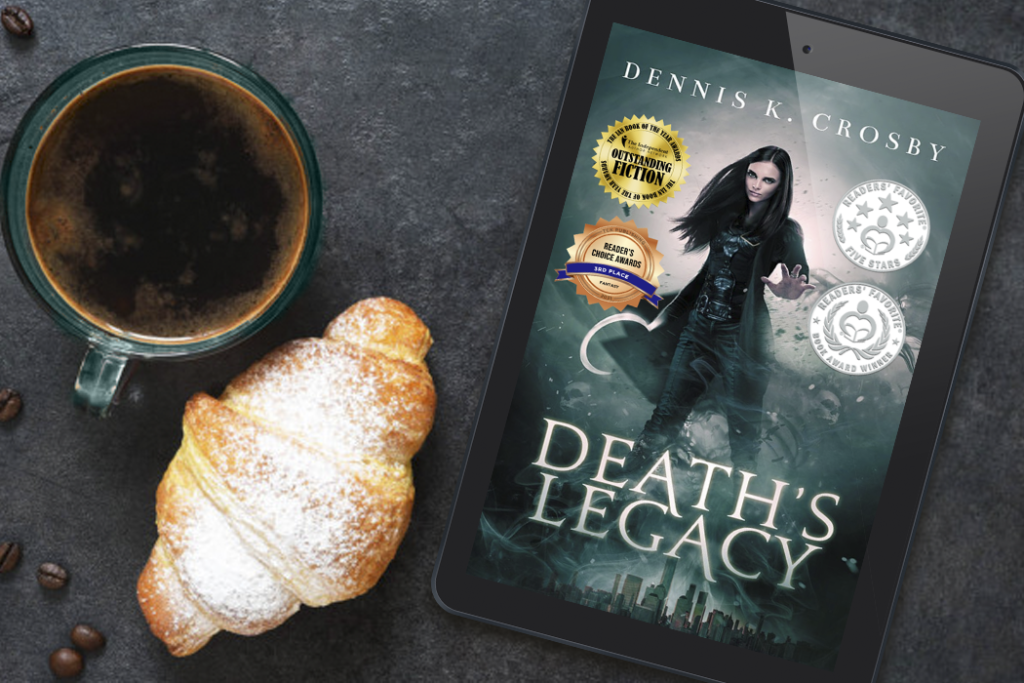 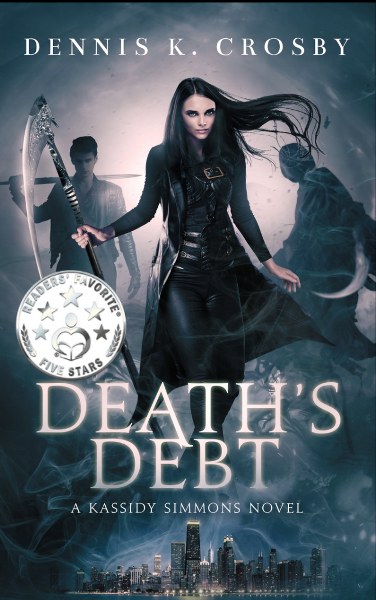 Kassidy Simmons dispatched the Angel of Death, secured the Scythe of Cronus, and claimed her birthright. As she navigates her new role and tracks down rogue Wraiths still loyal to Azra-El, an unknown force is plotting to make an ancient prophecy foretelling the end of the world a reality.

Seven hundred years ago, Jaxon Burke awoke in a field outside of Rome, with no memory of his former life. Now a present-day killer for hire, the immortal assassin has taken countless lives, and, because of the recent shake-up in the natural order, the memories of those deaths are fueling his nightmares—nightmares that feel real. He longs for relief. He longs for peace.

He longs for death.

A recent brush with the hereafter brings him to the attention of Solomon Steele, a Wraith angered by Kassidy’s recent ascension. With the promise of death as his reward, Jaxon agrees to help Steele destroy Kassidy—but he is ill-prepared for the repercussions of this strange world he is now in.

As the truth of Jaxon’s life comes to light, Kassidy must find a way to pay for the sins of the past and stop this deadly duo from destroying her, taking the Scythe of Cronus, and ushering in the apocalypse. 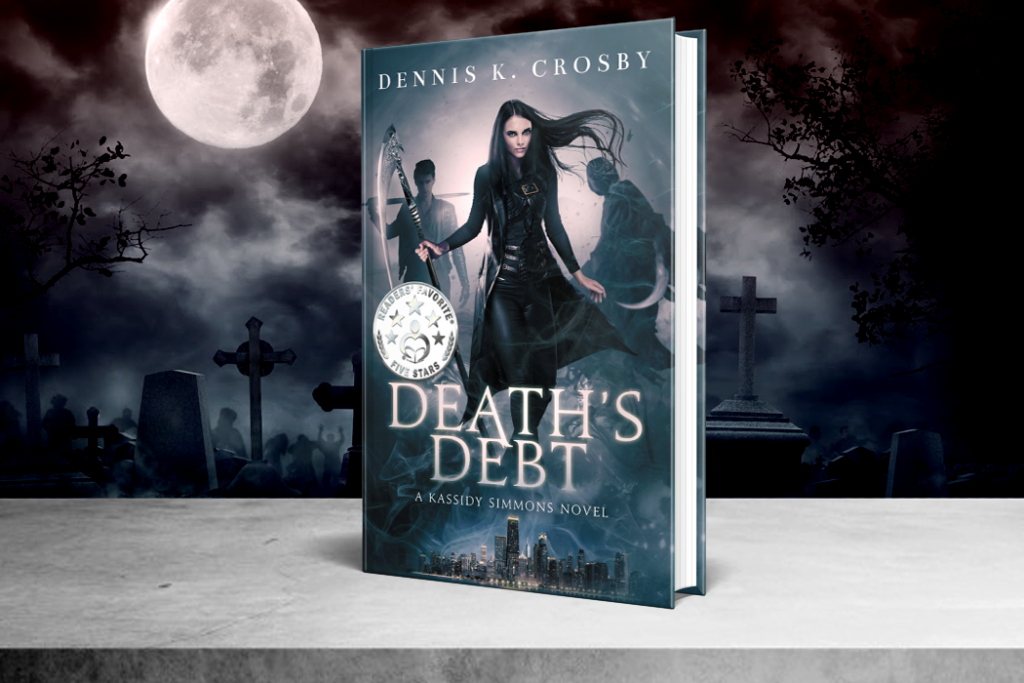 He was tired. It wasn’t the normal tired he felt after regeneration, and there would no doubt be added fatigue from this particular rebirth given the nature of his demise. No, the type of tired he felt was of the soul. He’d felt that way for a while and when he drifted off into that dark abyss of nothing, a part of him was satisfied. Jaxon Burke had been ready to die and not return.

Jaxon Burke was hoping to die and not return.

But here he was.

Still though, something was off.

He lay on the concrete, shivering, uncertain what do next. The gasoline had burning away from the ground, leaving only soot and ash between his flesh and concrete. He tingled still, but not from the regeneration. He tingled the way one does when they feel they’re being watched. There was an undeniable presence looming. He hadn’t attempted to open his eyes yet, and he was in no way prepared to defend himself, but he needed to do…something. Fear returned. Worse than when he’d been strapped to that pile of kindling that was once a chair.

It wasn’t the guy from before, the one who set all this in motion. Of that, he was certain. The presence he felt, the voice he heard, was something…else.

“I have to say,” the man said, “I’ve never come across anything like you before. I felt the pull of death in a way I’d never experienced. It was palpable. I almost choked on it. I was shocked that no Reaper had beat me here. Shocked, but pleased. Especially when I saw the life force inside you re-ignite. It was…remarkable.”

Confusion swept through Jaxon. He heard the words, but the context was lost on him. Who was this guy? What was this guy? Another immortal maybe? Someone like him?

“A couple of weeks ago, I watched my Primus die at the hands of a girl. That damned girl. She was the key to his ascension. I watched that dream die as she severed his head. But now…”

“Now, things may not be as lost as I thought.”

With trepidation, Jaxon opened his eyes, just in time to see a dark figure lunge forward, grab him by the neck and hoist him into the air. Naked and afraid, he grabbed the forearm of the man holding him. He kicked weakly, wildly, struggling for freedom. He’d just returned from death, a death he wasn’t even sure he’d bounce back from, to be greeted with…this.

“I think I need what you’ve got,” said the man.

Jaxon’s vision cleared despite the lack of oxygen, and his eyes widened as he saw the solid black eyes of a man with a wide grin. He watched as the man pulled back his free hand only to thrust it forward, violently, swiftly, into Jaxon’s chest. It phased through, lingered a while, then retracted. When it was completely free, Jaxon saw a glowing orb, golden and pulsating, in the man’s hand. Jaxon’s eyes shifted from the orb to the man, and in that distorted face, there was shock.

“You’re still alive?” the man asked. “You definitely are something different. Whatever you are, whatever you have, it’ll be enough to end Simmons and take what I deserve.”

Both men stared at the golden orb and watched as it trembled, as if sentient. It rolled, then spun, and finally, slowly, rose into the air. It seemed to glow brighter, growing larger at first, before it collapsed on itself leaving golden particles of light in the air—which promptly returned to Jaxon’s body.

When the man reached in again, he was met with a surge of electricity, sending him flying back. Jaxon fell to the ground. Looking up, he saw the man convulsing as if electrocuted. Confused, Jaxon fled from the warehouse to a back room. Finding some old, dusty coveralls, and boots at least two sizes too small, he dressed and found his way out of the warehouse. He didn’t know what that thing was. He didn’t know what had just happened. But he wanted no part of it. He left and headed for the only place he could think of where he might find a measure of safety. 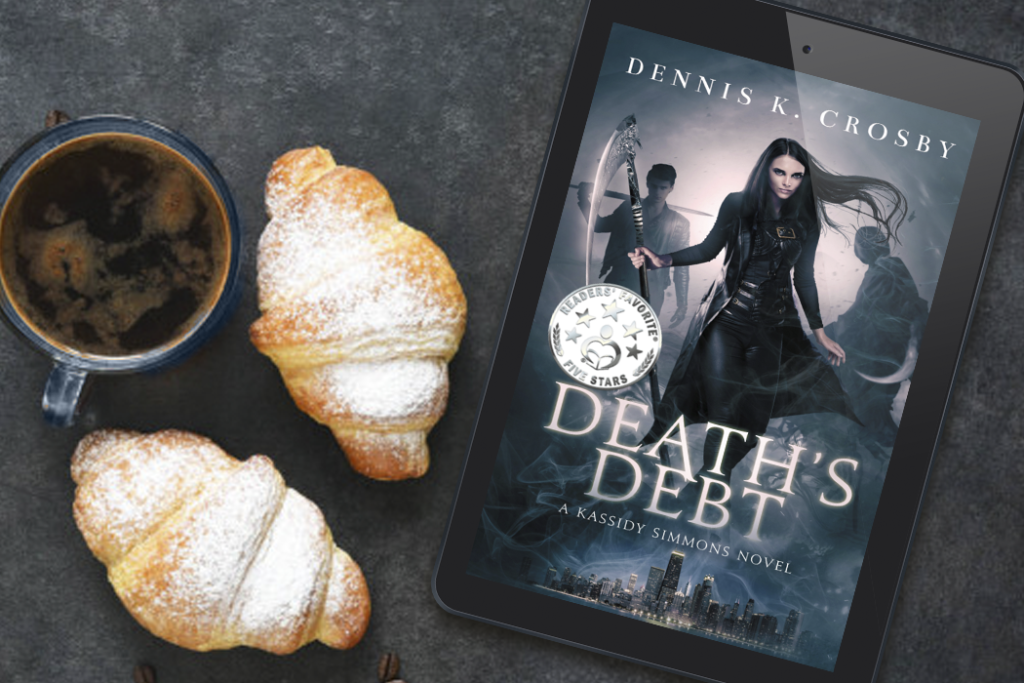 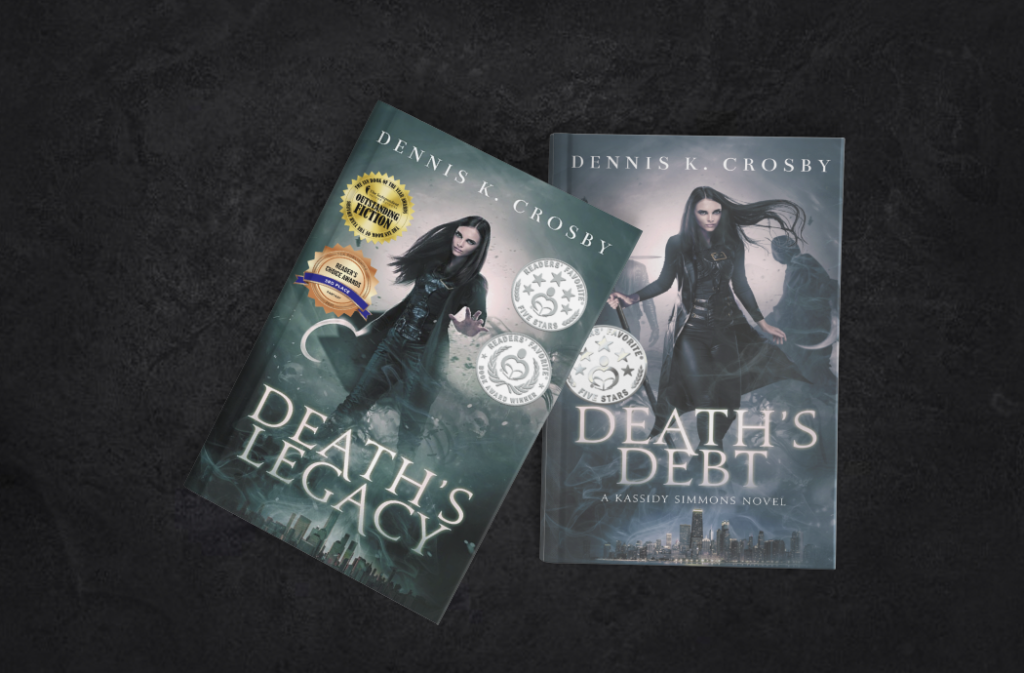 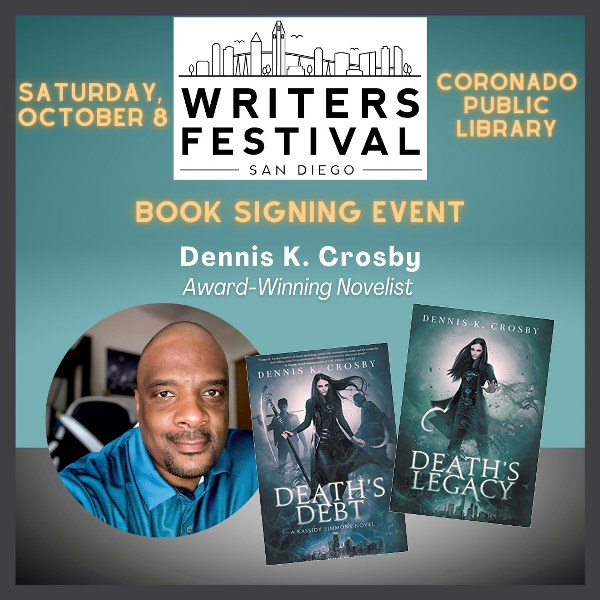 Dennis will be at the San Diego Writers Festival on 10/8/22 in Coronado and will be selling and signing copies of both books. The event is free, you can get more information at 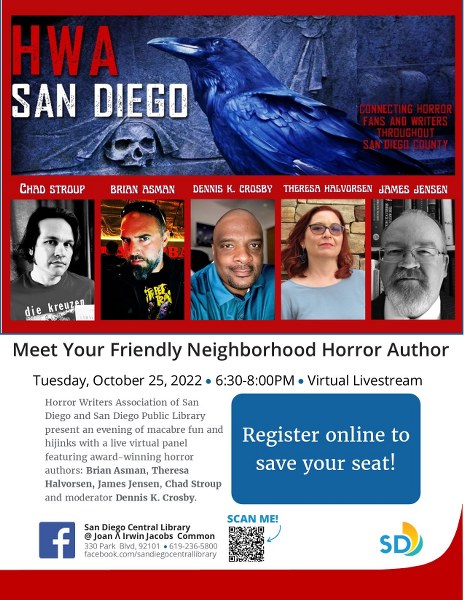 Dennis also has a virtual panel with the San Diego Central Library. You can register here: https://sandiego.librarymarket.com/event/virtual-event-meet-your-friendly-neighborhood-horror-author 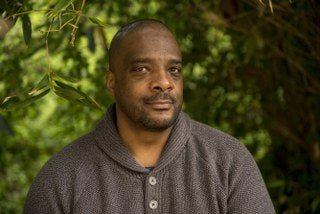 Dennis K. Crosby grew up in Oak Park, IL and completed his undergraduate work at the University of Illinois-Chicago. With a degree in Criminal Justice, he spent six years working as a Private Investigator. His love of learning about, and better understanding people, led him to pursue a master’s degree in Forensic Psychology. During his studies, Dennis transitioned to social service, and since 2008, has worked primarily with men and women experiencing challenges with mental health and addiction. He continues to be a staunch advocate of mental health reform, social justice, and efforts to combat homelessness.

Dennis always had a passion for writing but did not pursue the finer points of the craft until later in life. After leaving Illinois and moving to San Diego, Dennis connected with the local writing community where he strengthened his talents and understanding of the art of writing and the business of publishing. To further supplement his writing skills, in 2018, Dennis completed an MFA program at National University.

Now, he is the award-winning author of the Amazon bestselling urban fantasy novel, Death’s Legacy, released November 2020, and its follow up Death’s Debt, released November 2021. The bourbon loving Chicago Cubs fan and deep-dish pizza connoisseur is continuing his work on his Kassidy Simmons series and writing weird and creepy short stories in his spare time. A self-proclaimed geek and lover of pop culture, Dennis still lives and writes in San Diego, CA.

Sep 28
What Is That Book About
The Sexy Nerd ‘Revue’

Oct 7
Inside the Insanity
Momma Says: To Read or Not to Read