I am thrilled to be hosting a spot on the THE BROTHERS FLICK: THE IMPOSSIBLE DOORS by Ryan Haddock & Nick Wyche Blog Tour hosted by Rockstar Book Tours. Check out my post and make sure to enter the giveaway! 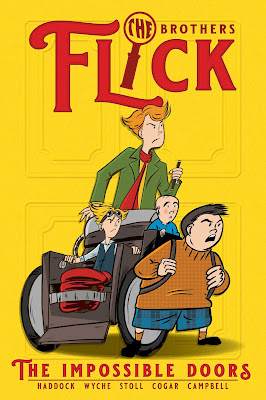 Sherlock Holmes meets the Wayside School in this Middle Grade supernatural sleuthing graphic novel about the Flick brothers – four siblings searching for explanations to outbreaks of supernatural strangeness and otherworldly weirdness in their Edwardian-era hometown.

A bump in the night? They’re on the case! At Strander House, things are…weird. There’s an ogre wedged in the closet, and you have to be careful not to slip on the leak coming from the ocean in the attic. What’s possibly weirder than the fact that you can walk into the bathroom and end up in next Tuesday are the four brothers who investigate these strange supernatural occurrences…the Brothers Flick!

Leo, Desmond, Remy, and Cub seek to get to the bottom of every shadow you swear you saw move. If they happen to stumble upon answers to the mysterious disappearance of their own family along the way, all the better.   For fans of  Lemony Snicket’s A Series of Unfortunate Events, Gravity Falls, Whispering Pines, the Hardy Boys, the Winterhouse series, the Greenglass House series, and the Wayside School series!

“… the metaphor of “impossible doors” leading toward unending universes, where even the smallest changes reverberate, provides a unique framework for themes of grief and healing.”   – Publishers Weekly

Talk about your favorite kind of character to write about.

Ryan– There are three types of characters I enjoy writing about, and luckily, I get to write about all of them in this book. What, you thought I would actually pick just one? Like most writers who aren’t Hemingway, I have a problem with brevity. Why provide one answer when I can give three?

First, I enjoy writing characters who are exactly like me. And why wouldn’t I? I know how they think; I know how they talk; I know what they want. It makes the character simple for me to understand, which in turn makes them more effortless to write. And I believe that kind of confidence comes out in the writing. Leo, while unapologetically and unquestionably based on my son Liam, also has quite a bit of me in him. And he’s one of my favorite characters to write, because I know exactly how he would think or react in just about any situation. I tend to build scenes around the dialogue, and — you can ask my editor — when it comes to Leo, there’s always too much dialogue.

Second, I enjoy writing characters who are nothing like me. I feel, as a writer, if you’re never stepping outside of your comfort zone and exploring things you’re not familiar with, you run the risk of growing boring. Writing characters who are my polar opposite forces me to think differently and assess situations from another angle. Like my son Dexter, Desmond is one of the most emotionally intelligent people on the planet. (Note: I said people, not just kids.) Where Leo is logical and practical and far more interested in mysteries than in the people they involve, Desmond balances him out. He remembers that every problem he and his brothers encounter affects somebody, and that person needs just as much care and attention as the mystery itself. Every Holmes needs his Watson.

Third, I like writing characters who take on a life of their own — the ones you discover as you’re writing them. It’s one thing to meticulously create a character and plot out a backstory and a character arc and strengths and weaknesses; it’s another for those things to just happen naturally as you’re writing. One of the best examples of that in The Brothers Flick: The Impossible Doors is in Chapter 3. Mrs. Abbey, one of the caretakers of Strander House, answers the door to find a knight straight out of the Middle Ages. Her reaction wrote itself; I just made sure it translated to panels. I attribute this kind of character building to my love of Dungeons & Dragons. Some players write pages of backstory before they ever play a character, but I tend to let character traits and history develop as I play. I’ll have an idea of who they are and how they act in certain situations, but I try to let everything else grow on its own.

Talk about your least favorite kind of character to write about.

I’ve frequently heard writers say that they hate writing background characters and supporting characters, but I love the challenge. How do I make this background character memorable? Maybe they’re only in one scene walking by a store window, but what could they be doing that would give you some kind of insight into their life? What was their story before that window? What happens after? I’m the kind of person that, on my second or third viewing of a movie, pays way more attention to the background characters and the extras. What are they doing? What are they talking about? Where will they be after this? Having had a friend who has worked as an extra in a few different movies and TV shows, I found it fascinating when he said that he and the other extras in a scene actually came up with a backstory for their characters and a reason why they were discussing what they were discussing while they were the obscure, out-of-focus people sitting at a picnic table in the background of a scene. I loved that.

Characters in a story, no matter how important they are to the overall narrative, should never just be cardboard cutouts. They have lives of their own outside of the scene they’re in, and it helps to create a more believable world if the author keeps that in mind. 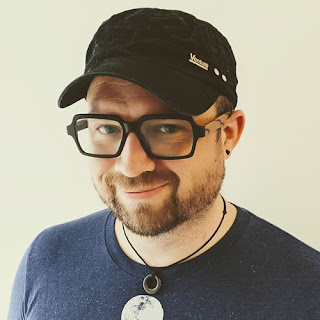 Ryan Haddock has wanted to write books since he was six years old. Over the years, his career aspirations also included rock star, lawyer, rock star lawyer, and teacher, but writing books never left his heart. Thank goodness someone finally let him write a book.

Ryan resides with his wife and kids in a charmingly quaint city known for its ridiculously fast internet and a jingle about a train. 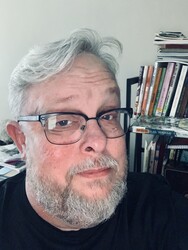 Nick Wyche lives in the foothills of the Smoky Mountains with his wonderful wife, Suzanne, overlooking the Tennessee River. He has been obsessed with comics and cartoons for over 4 decades and still can’t believe he gets to draw professionally. Hometown/State: Chattanooga, TN

2 winners will receive a finished copy of THE BROTHERS FLICK: THE IMPOSSIBLE DOORS, US Only.