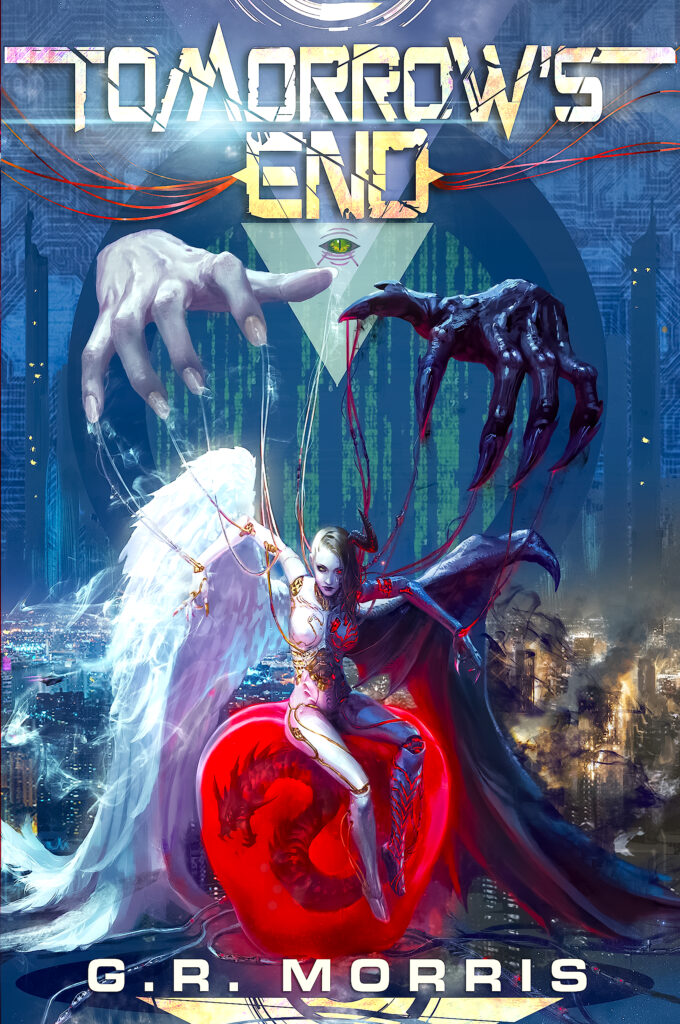 “It’s mind-blowing for sure. I repeat. This book blew my mind. (Cozy
With Books) It’s the type of book where, were it to be a Youtube video and
if I were to do any form of drugs I’d comment, “I’m way too high for
this s***.”-

10-time award winning author, G.R. Morris writes, “A philosophical
fiction that blends The Matrix and Hellraiser, It gives answers to free will
and the meaning of life. A coming-of-age story where a teenager becomes a
superpowered messiah and attempts to free humanity from the bonds of alien
control.”

Kevin Knight’s been training his whole life to fulfill a
galaxy-saving prophecy. But when a grisly tragedy lands him in jail and
demonic forces flood his consciousness, the fate of time and space seems
doomed. Until a trench coat-wearing alien renegade shatters his
understanding of reality. Discovering Earth is merely an alien illusion to
manipulate humankind, Kevin struggles to know whom to believe—his
strange scaly new friend or the dark voices in his head. But with Hell
itself planning to slaughter everyone, he must resist the darkness and
master his powers to reprogram the future.

Can Kevin, a possessed Messiah, claim a destiny of his own before humanity
goes extinct?

Tomorrows End is the first book in the mind-bending sci-fi horror series,
The Path of a Savior. If you like galactic-scale battles, chilling violence,
and brain-rattling explorations of the nature of free will, then
you’ll love G.R. Morris’s unforgettable epic. 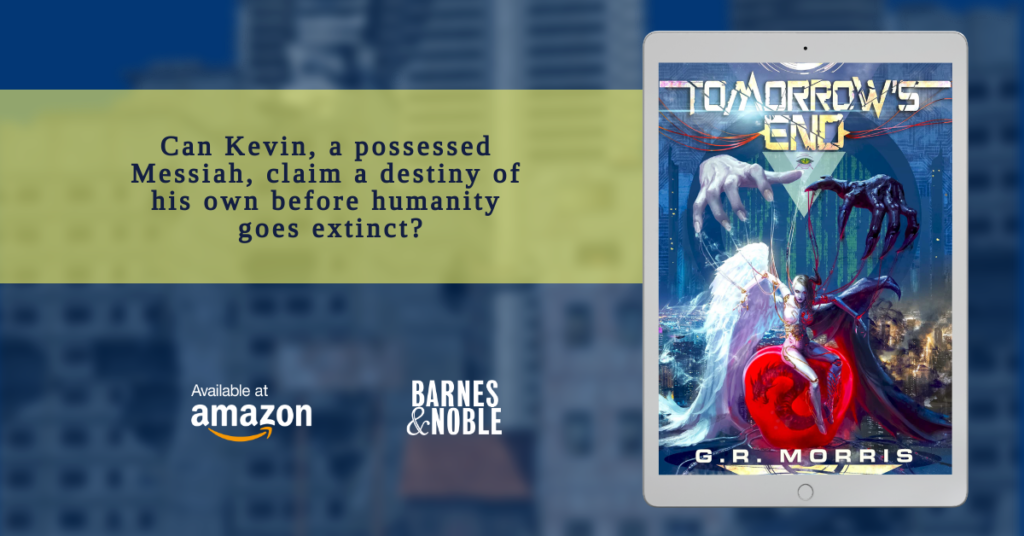 “Life contains but two tragedies. One is not to get your heart’s desire; the other is to get it.”

Earth in the distant future…

Kill me! K… k… kill me! Please!” A bed of spinning, white-hot nails ground into the flesh of the black-scaled alien pinned to a wall. “It’s a Beautiful Morning” by the Rascals roared over the faint, silvery voice of a girl singing along.

“Please, God, somebody!” The creature looked down and watched a nail burst through the front of his shoulder.

Tiny blinking lights from a circuit board shone through an undulating, black gelatinous blob. The alien whimpered as the device; like a parasitic squid, squeezed the crown of his skull. A torrent of voltaic streams crackled through the clear tentacles and into the back of his neck. Weak light flickered against pink confetti glued to the cracked walls with dried blood—someone had drawn dozens of smiley faces in it with their finger. The room mocked with a hundred heads of grinning china dolls plastered within the gore.

A long-legged silhouette of a skinny, petite girl danced. “There will be children with robins and flowers.”

The blob was keeping him alive. No amount of blood loss would give the creature peace. It was missing every major appendage, and every vital organ was pierced with a white dagger etched with glowing glyphs.

A mischievous, high-pitched giggle echoed in the dark. “Silly Billy. What God allows this?” She was poisoned candy, bubbly and childishly sweet.

The music muted. She still danced.

“Thanks for spilling your cute little guts.” The tip of a pink high-heeled boot broke into the light and kicked the creature’s entrails across the gray steel floor.

“How many times must I tell you? Genocide is not a sport! Wildfire, let him go,” the serene voice said.

A soft glow of white wings appeared on the ceiling.

“An angel! Save me!” the creature gurgled.

The girl laughed, the sound dainty and delicate like tinkling chimes in a gentle breeze. “No angel, darling. One more freak playing a loving god. I like freaks.”

The alien watched her thumbnail, painted with a diamond skull and cross pistols made of bones, glide around a single red button in the center of a control module covered in alien symbols.

“How can I possibly be expected to handle work on a day like this?”

A disk hovered in the middle of the ceiling. It was angled toward the alien, leaving the rest of the room in near darkness. The tortured creature could barely make out the outlines of a disheveled penthouse apartment and several piles of bodies. Beyond the long row of broken windows, the ash fell like snow through clouds of smoke beneath a pitch-black sky.

The woman’s jagged bone tiara caught some of the light. “Hire me, people die. That’s the breaks.”

“He told you everything he knew four hours ag—”

“Oh, pooh.” She giggled. “Will ya shut up!? I swear it’s always ‘stop killing so many people, don’t blow up that city,’ and ‘it’s not polite to punch people as a greeting!’”

Another white dagger streamed through the air, stopping in the center of the creature’s chest. “So ya think he chose this suffering? He wanted this? You. Are. Sick.” Light bounced off Wildfire’s smile.

The alien’s chuckling captor responded to the voice. Two more daggers hit their mark. Now there was almost no more room for another one on its body.

The alien whimpered. “By heavens, help me!”

Wildfire stopped laughing. “Yes … save him, Raksasha! Aren’t ya all powerful? Aww, the changeling god don’t care about you. That’s messed up, girlie.”

Wildfire sniffed the air. “Goody. Your pals will play!” She stepped into the light, inches from her prey’s face.

As seen through the curtain of green blood cascading from his forehead, her face was that of a sadistic clown. Half was painted the milky white of a geisha—the other half, the blood red of a killer. Scattered like bright stars in space across the red cheek were tiny black alien symbols speckled like glitter.

On the white cheek, a small human heart was drawn in contrasting blood. The woman smiled, displaying that evil jester grin. Her dainty voice was almost eerie. “Honey, ya buddies are gonna”—she fluttered her blood-drenched eyelashes—“go ba-booom.”

A little of the life-giving liquid seeped out of the crimson-filled sockets and flowed down her cheeks. The walls of the room vibrated at the sound of an approaching alien ship.

Glitter and gunpowder were caked on the walls. Hundreds of pink teddy bears piled in the lobby fixed the scout with a glassy stare.

Dozens of soldiers entered the stairwell and waded through broken, pasty doll parts. As the rest of them filed in, each of the bears’ eyes lit up red.

With what was left of the tortured alien in one hand, she charged, her body bursting through the broken windows.

Flinching, the pilot gripped the stick, launching a missile.

Wildfire drove her fist through the warhead. The ship’s front thrusters ignited.

“You forgot your buddy!” Her body ablaze, she landed on top of the ship and slapped the torso of the tortured alien to the cockpit.

“Ahhhh!” The pilot thrust the stick down and dove the ship into the building.

Glass burst, metal crunched metal and Wildfire’s skull-and-pistols thumbnail pressed down on the button of the control module. “Wheeeee!”

In an instant, the gelatinous device attached to the creature’s forehead expanded to the size of a basketball. There was an acidic pop, and the building atop a mountain of ash and debris burst like a Roman candle.

Then a crescendo of secondary explosions ripped through its floors, pulling the structure down.

Dropping the detonator, the silhouette of a female figure fell sixty stories, her fall turning into a dive, full of fire and destruction. Flaming multicolored confetti shot from bursting windows, whirling through the sky.

No sooner had she pressed that button than came a cacophony of stunning proportions, a ground-shaking storm of detonations, and ten city blocks ignited in churning flames.

The figure spun and, moving like an Olympian, landed on her feet with her arms in the air, welcoming the rubble piling up on her.

Accompanying the snapping of metal and crunch of stone was the prolonged, painful squeal from a group of burning soldiers crushed under the debris.

“Not everyone likes napalm showers,” Raksasha said. “What if I was still alive?”

Wildfire’s hands went to her hips. “Aww … why you always killin’ my buzz?” 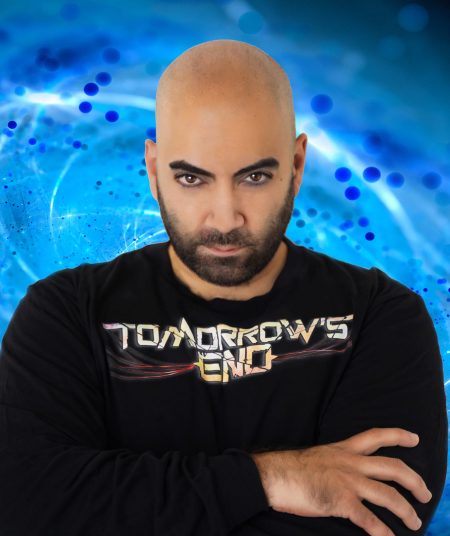 G.R. Morris is a 10 time award-winning author. He has garnered much acclaim for his debut novel, Tomorrows End. He not only won a prestigious Dragonfly book award, but a Feathered quill and received multiple 5 star reviews from many websites. He was a philosopher and a graduate from seminary studies before taking writing courses in college.