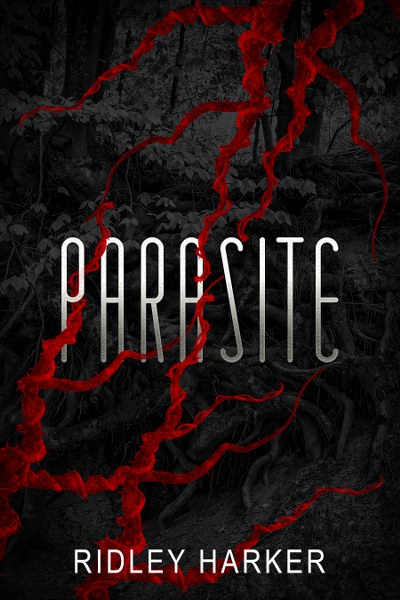 Some teenagers are a little more monstrous than others.

Seventeen-year-old Jack Ives is used to being unlucky. His only friend has just moved away to college, his parents are alcoholics, and he’s relentlessly bullied by the town psychopath. All that begins to change with the arrival of a handsome but quirky new student, Lucien, who wants to be more than friends.

Their newfound happiness doesn’t last, however, as a strange new illness strikes the island. Fishermen go missing, and the villagers left behind aren’t themselves anymore. When Lucien is suspected to be the cause of the outbreak, can Jack overcome his teenage hormones and save Eldrick Isle? Will he even want to? 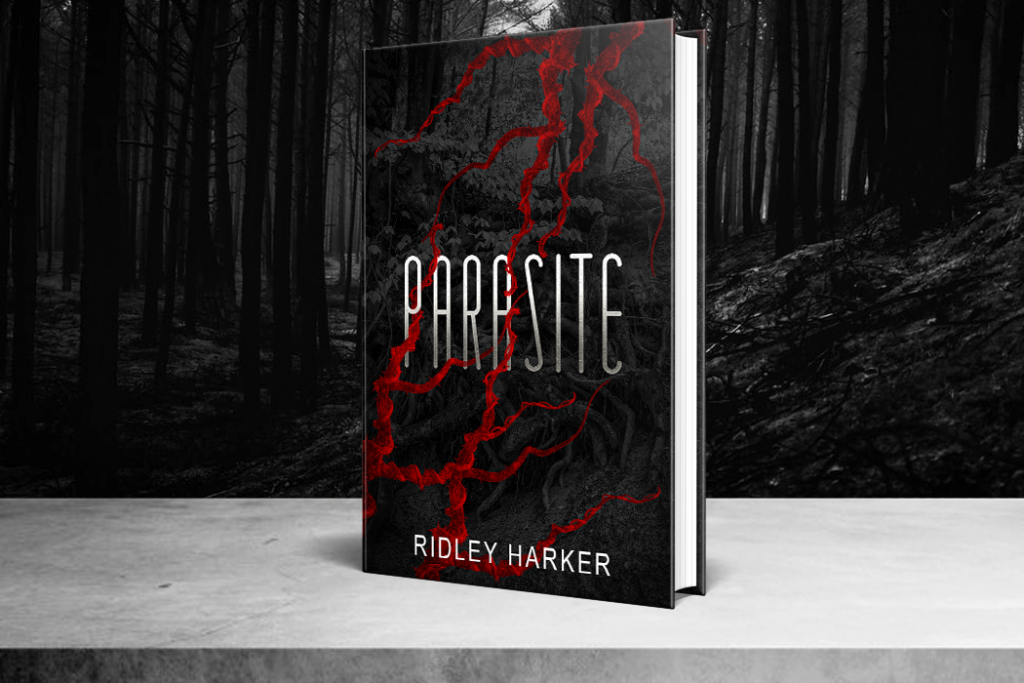 When some kooky mainlanders offered to pay extra for a midnight ferry, Bill Jamison had jumped at the chance to pay off his bar tab. Now he regretted it. The middle-aged fisherman leaned morosely against the starboard rail while beside him his business partner, Jim Kendrick, fought the uphill battle of smoking a pipe during a storm. The rain pounded against the deck in a dull roar and, judging from Kendrick’s cursing, the pipe had gone out once again.

Not for the first time, Jamison reluctantly noted that his partner was getting on in years. Kendrick’s coat hung from his wizened frame like a cloak. His mysterious weight loss had made them both nervous, not that either one said anything. For an Eldrick Islander, the prospect of cancer was like foul weather; something to be endured without complaint.

“Goddamned son-of-a—” Kendrick upended the pipe and a sodden wad of tobacco fell onto the deck. He kicked it away, smearing it across the boards.

“We shouldn’t have gone out tonight,” Jamison said.

“Horse shit,” Kendrick huffed. “We’ve sailed through worse than this.”

“That ain’t what I meant.” Jamison jerked his head toward the mainlander lurking near the bow of the ferry.

Tall and blond, his passenger’s washed-out appearance resembled a photograph, the kind found in a neglected attic of subjects long deceased. Judging by the young man’s pinched frown, Jamison assumed that Silas Spencer was either a lawyer or an undertaker. He shuddered; Jamison hated lawyers, having seen enough of their kind during his divorce. Blood-sucking monsters the lot of them, in his opinion, but he had never been afraid of them, not even when the wretches helped his ex-wife take half of everything he’d owned.

But he was afraid of this one.

It was the eyes. He had seen eyes like that once before, years ago. Back when he had spent much of his days drunk. Once, while Kendrick cleaned their catch, Jamison had gone too far and drunk too much. His legs had betrayed him, and he had tumbled over the side. He remembered tasting blood. A tangy mix of iron and salt that burned his lungs when he tried to inhale. His eyes had stung. He had floundered in the icy water. He, a man who had learned to swim before he could walk, was drowning.

Then the moment of panic was gone, and instinct had set in. Jamison’s powerful legs had propelled him upwards, his arms outstretched toward the boat. He had nearly reached it before the shadow was beneath him. It came at him like a torpedo, almost too fast for his gin-addled brain to comprehend. A massive, prehistoric monster armed with muscled jaws and sandpaper skin. The soulless black pits of its eyes rolled back in its head, and its gaping maw expanded to reveal rows upon row of serrated teeth.

In the split second before the attack, Jamison had stared into the darkness of oblivion—then he had been shaken like a terrier on a rat. The shark had separated the flesh from his leg and sentenced him to a month in a mainland hospital whose bill he was still struggling to pay off. The very existence of such a creature disproved the notion that humans sat at the top of the food chain.

Safely back in the present, Jamison shuddered and remembered to breathe. He rubbed at his forearms, warm beneath his thick woolen sweater. He had been lucky. If he had drunk a little more gin, perhaps he wouldn’t have had the presence of mind to sink his knife deep into the shark’s eye socket. Now only scars and nightmares remained, and he hadn’t touched the bottle since. He liked to say that his rock bottom was on the ocean floor.

Jamison recognized something of that great white shark in Spencer. The man’s flat, grey eyes made his skin crawl. He glowered at Spencer’s broad-shouldered back, but Spencer didn’t seem to notice or care. His attention lay on the swirling mists beyond the ferry’s bow. Typical yuppie mainlander. Pretentious bastard, Jamison thought.

“They’re up to something,” he said aloud, glancing toward the cabin where the other one had sequestered himself.

Kendrick only snorted. “They’re mainlanders. They’ll spend a few weeks on the Isle, get bored, and then go back to whatever hell hole they came from. You know the type. We get a few every other year or so.”

Jamison did know the type. Unlike Nantucket, or Martha’s Vineyard, Eldrick Isle never attracted the summer crowd. There was nothing to offer. The once booming fishing industry had been usurped by commercial trawlers decades ago, forcing the neighboring isles to turn to seaweed farming instead. Eldrick, however, chose to bow its head and soldier on, clinging to the memory of its glory days. Billboards advertised a hotel that had long since shuttered its doors. The lone diner had a Visitor’s Special that no one ever ordered. The pier greeting the newcomers reeked of dead fish, the ever-present stench emanating from the dozen or so rusted fishing boats docked in the harbor.

Then there was the island itself: Eldrick’s shores were steep, rocky cliffs, with edges sharp and jagged like broken teeth. The surf stirred up debris and rotting vegetation, littering the island’s few beaches with trash from the abandoned canning factory on the island’s east side. Even the hottest days of summer were damp and chilly. Mist obscured the frigid waters. It crept onto the island, soaking through the sturdiest of coats. The few vacationers that showed up in August inevitably took one look at the dying town and turned around to book their return ticket.

Rain splattered against Jamison’s hood, echoing in his ears. Kendrick tried his pipe again to no avail. The storm lulled enough that the sound of retching was audible from within the depths of the cabin. Rasping coughs followed by the wet splatter of vomit. The downpour returned with a roar. It slipped past Jamison’s hood, soaking his neck. His shiver had nothing to do with the cold.

Kendrick abandoned his pipe and frowned, his rheumy eyes searching Jamison’s face. Jamison cleared his throat, striving to be heard over the rain and yet not loud enough for Spencer to hear. “Something’s wrong,” he shouted into Kendrick’s ear. “We were barely on the water before the kid got sick—”

“Billy, you been drinking again?” Kendrick asked, clasping Jamison’s shoulder with gnarled fingers. “When’d you get so goddamned superstitious?”

“No, I haven’t been fucking drinking! I’m only saying that this whole thing feels wrong; if one of my brothers were puking like that, I’d at least go check on him. I think the kid’s got something bad—what if it’s contagious?”

“What, like ee-bolah?” Kendrick asked, with a sharp look toward the ferry’s cabin. “Naw, it couldn’t be…”

“You checked on him?”

“Well, someone ought to,” Jamison said.

“You do it,” Kendrick said dubiously. “Last time, I slipped in it and damn near broke my back.”

“Go check it out. If he’s only seasick then I’ll clean it up myself, but I’m telling you, something’s very wrong with that kid.”

“Christ, Billy! Nag anymore and you’re gonna sound like my wife.” Kendrick gave him a shove and then marched across the deck toward the cabin. Jamison caught movement in the corner of his eye and found Spencer watching them, his back against the railing. Their eyes met, and all of a sudden Jamison couldn’t hear the storm. There was nothing but the blood pounding in his ears. One corner of Spencer’s thin mouth twitched upward into a razor’s edge of a smirk. Jamison’s skin crawled. He wrenched his eyes away.

“Jim, wait!” Jamison shouted over the rain, but Kendrick had already knocked on the cabin door. The old sailor reached for the handle, his calloused fingers closing in on the doorknob. Jamison sucked in his breath.

Kendrick half turned around, his shoulders squared and his lips pursed, eyes narrowed beneath his bushy white brows. His hand was still on the cabin door. “Jesus Christ, Billy, what now?” he demanded. “What in the hell’s wrong with you, you crazy son of a bitch? You’re shaking like a virgin on—” He paused and glanced down. Jamison didn’t know why until Kendrick tried to take a step back. His boot remained glued to the floor.

Kendrick shoved at the door and yanked at his shoe. He stumbled as it came loose, trailing a viscous black gel behind it. More of the substance pooled out from underneath the cabin door. Lightning flashed, and a rainbow sheen coated the surface of the muck. The door creaked open.

Before Jamison shouted in warning, something darted out from the gloom. Thick and ropy, like a bundle of rotten vines, it hit Kendrick’s wrist with a wet slap, latching onto his bare skin. Kendrick sputtered, his eyes wide and his mouth hanging open in a perfect caricature of surprise—then another tentacled limb emerged and shoved itself down his gullet. Like a fish on a hook, he was yanked into the cabin. 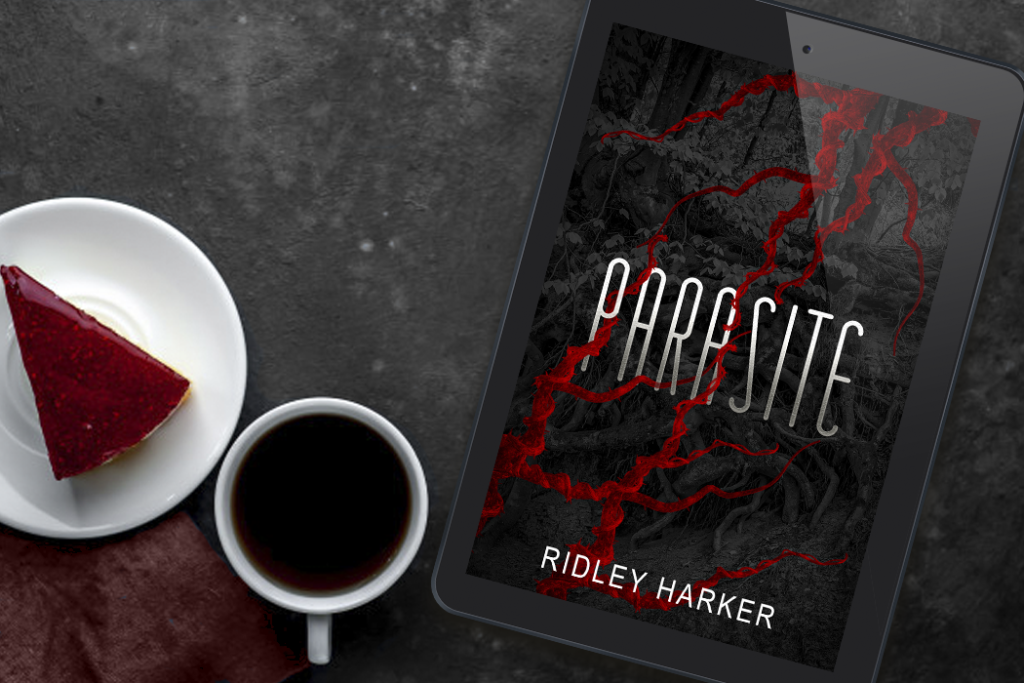 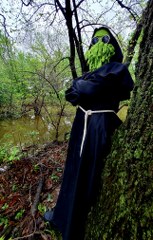 Ridley Harker is an up-and-coming horror author who delights in all things gay and spooky. Influenced by Billy Martin (Poppy Z. Brite), Clive Barker, and Gemma Files, his favorite books are those with enemies to lovers, great villains, and queer main characters. Horror-romance is his favorite genre. He lives in the Middle of Nowhere with his two dogs, a grumpy old snake, and a host of pet tarantulas. Ridley is currently working on his MFA.

July 31
THE BOOK JUNKIE READS . . .
4covert2overt ☼ A Place In The Spotlight ☼

Aug 2
eBook Addicts
Girl with Pen
Inside the Insanity

Aug 3
❧Defining Ways❧
Books a Plenty Book Reviews
Momma Says: To Read or Not to Read