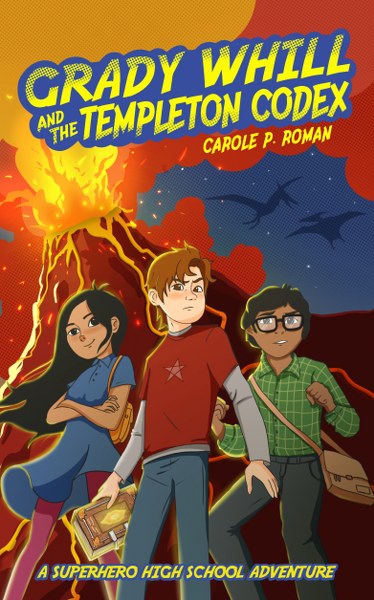 Grady Whill and the Templeton Codex

Templeton Academy- the superhero high school is finally open!
The prestigious academy is recruiting the best of the best to enroll in its student body.
The school is as mysterious as it is exclusive.
Grady Whill thinks there is nothing special about him to make the grade.
However, his best friend, Aarush Patel has been selected and thinks Grady has the right stuff.
Even school bully, Elwood Bledsoe is attending.
If Grady is fortunate enough to be picked, his guardian has forbidden him to attend.
Will a family secret prevent Grady from becoming the superhero he was destined to be? 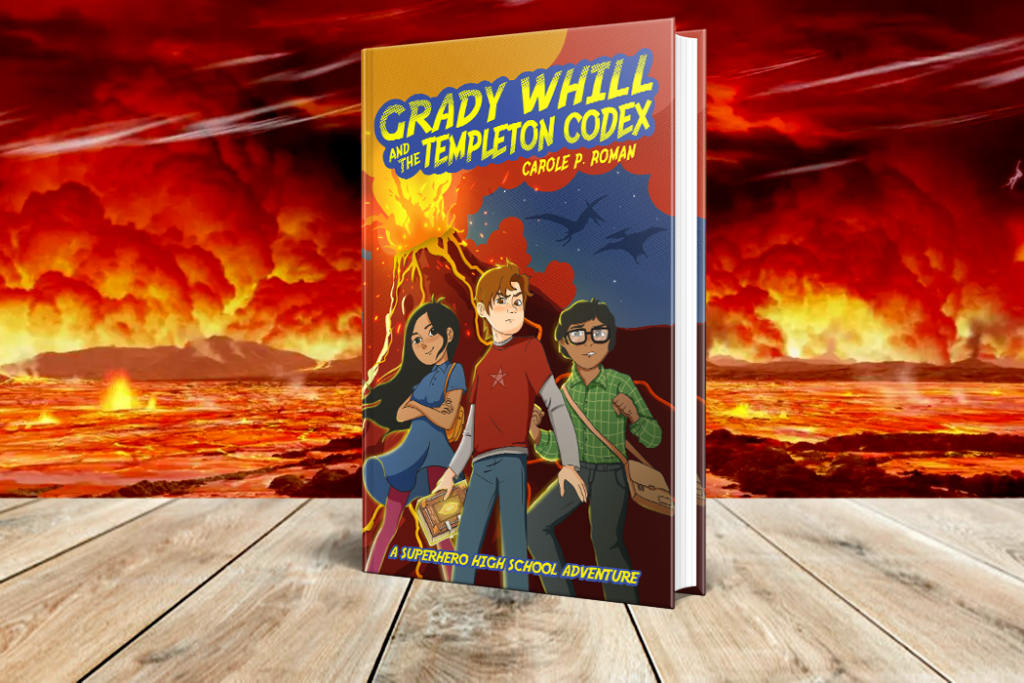 There Whill Be Blood

A BARELY COOLED LUMP of lava hardened under my feet. One of my sneakers was stuck between two small rocks in the solidifying mess. I stared at my foot in disbelief. Instinct told me I should be a human torch, my legs nothing more than toasted stumps. I glanced up, my heart beating wildly. We were trapped on the side of the mountain facing our school, separated by a burning sea of molten rocks.

The world around me steamed, the lava staining the sky burnt orange. Trees swallowed by molten rock looked like skeletal hands emerging from a grave that glowed beneath the blackened crust. I saw heat waves shimmering from the earth but felt none of its intensity. I pulled fiercely, feeling my ankle twist. Aarush steadied me as I nearly toppled over. He wasshirtless, his back slick with sweat and covered with scrapes. His fingers worked feverishly to free my foot.

Overhead two helicopter-sized pterodactyls circled the craggy summit. The wind from their leathery wings buffeted the two of us. I think the air they circulated stopped the patches of lava from cooking us alive, but what do I know?

“We better get moving, Grady. Leave your sneaker. We are risking getting burned by staying too long in one spot.” The ever-practical Aarush reasoned as he pulled the velcro releas- ing my foot. I wobbled, then fell to one knee.

“Do you think they’re real?” I hollered to my friend over the noise, pointing upward.

“I’m not sure,” Aarush responded with a shake of his head. “Right now I can’t tell the difference between fantasy and real- ity.” The answer to that question was resolved when one of the predatory birds spiraled downward in a dive. “We have to go that way!” He waved to the lee side of the mountain, where small brush fires dotted the hillside. “The lava appears to be traveling in the other direction.” His hands moved to push glasses up on his nose, only to realize they were long gone, lost in our escape.

“Look out!” Aarush hunched down as the wind from the pterdactal’s wings fanned the area around us. “Oh yes, I’d say they’re real!”

Flames shot up as the aptly named Scarface Mountain erupted like a Fourth of July Fireworks show.

“It’s not even a volcano!” Aarush shouted, his voice cracking. I could hardly hear him over the buzzing and hissing spewing from the hollow cone. I looked at his face, wondering if this was a good time to tell him he didn’t look like he was on the spectrum. Displays of emotion didn’t come easily to him.

“Really?” I shouted. “You think that matters now?”

The earth shook, breaking the surface around us. Stones bobbed like bouys in a burning river. The ground collapsed cracking open a chasm, the sulfuric smell of rotting eggs assailed my nostrils. We both fell onto the soil sliding down Scarface’s rocky incline. I closed my eyes, the world spinning by with dizzying speed.

I heard Aarush scream. “Tuck your head and elbows!”

It seemed like the natural thing to do. Covering my head, I pulled up my knees allowing my arms and flank to take the worst of the beating while I prayed the lava stayed on the other side of the hill.

Trees uprooted and debris loosened as if someone had upended the mountain like a salt shaker. We rolled, our clothes catching on torn roots. Branches lashed my face. the musty scent filled my nostrils until I thought I would choke. I didn’t know if it was the beating I was taking or the smell. Either way, tears coursed down my face.

Aarush rushed past me. Sharp rocks dug into my skin, scraping me raw. The rapid descent and the spinning scenery made my gorge rise. All I saw was a blurred green landscape as if water had diluted a painting leaving everything indistinct, smudged.

My chest tightened as it did when I became skittish, my breathing turning into a wheeze. “Breathe!” My inner-voice ordered. The air was sucked out rather than in, no matter how I tried I couldn’t get my lungs to cooperate. Snatches of the breathing exercises flitted through my memory like a disjointed movie. Try as I might, I couldn’t get my mind and body to work together.

I couldn’t focus beyond the fact that I was sure I was about to die. Someone must have been watching over us as we made our descent. It was a miracle that neither of us ended up a splattered mess against a boulder.

I clutched at the racing ground trying to find a loose root to grab. My rubbery legs were soon too numb to be of any use.

Breathe in, breathe out. I closed my eyes, concentrating on my strained airways, trying to implement the training Miss Garcia had pounded into my head. No luck. My world nar- rowed to a tiny pinprick as I struggled for oxygen.

I heard a splash as I landed in a babbling brook a minute later. Maybe that was Aarush babbling. I was too winded to know the difference.

Cold water stole what little breath was left in my battered body, soaking through my school uniform, making it stick to my backside. The material was supposed to be impervious to water. It was obvious it had to be sent back for product testing. Apparently the special material failed under extraor- dinary circumstances. The cloth acted like a sponge becoming waterlogged and weighted on my body.

I noticed with no small amount of relief that it was cold and we hadn’t landed in a sea of burning lava.

“Where’s the lava?” I croaked.

“It went down the front side of the mountain,” Aarush gasped.

I splashed around in the water as I tried to rise. Even though it was no deeper than a few inches, my body felt leaden.

We had to get moving.

My muscles refused to work no matter how hard I coaxed them. I was a patchwork of stinging abrasions, and I tasted iron in my mouth where I’d bitten my tongue. Rolling over, I crawled on my stomach to the edge of the water. I lay onto the bank where I tried to catch my breath. Blood dripped into my eye from a cut over my brow making my vision fuzzy.

My left hand appeared to be stuck. I fumbled with my right hand to find my inhaler they’d given me at school, blindly bringing it to my lips to take a blessed puff. It worked faster than any inhaler I used at home. The medicine filled my throat, traveling into my airways opening my chest like bellows.

Relief. Pure relief. It worked. My airways expanded. I wasn’t so positive about the rest of my body. I tugged my left arm, but it wouldn’t move.

Someone groaned. I’m pretty sure it wasn’t me. I had to get up and help Aarush. Taking another deep breath, I crushed the crazy thoughts galloping in my head and focused on what to do next.

On a shaking elbow, I propped myself up to find a pair of finely polished boots planted on top of my hand. The foot pressed down, gently at first, then with a bit of force, enough so small pieces of gravel embedded in my flesh. I pressed my mouth into a firm line, refusing to utter a sound. The tips of my ears burned. I knew they were bright red; I could feel their heat. It matched the warmth of the ring I wore around my neck.

The sound of a deep voice snickering sent chills down my spine. It grew into booming laughter that filled the ravine, the sound of it reminding me how much I hated that kind of thing.

I peered up. The bright sun blotted out my captor’s face. I didn’t need to see it to know who was above me. I recognized the voice.

The prehistoric birds made one last circle over us. I watched, stupefied, as they banked toward the setting sun.

“At last!” he shouted to the sky like a triumphant combatant.

At last? I thought. Who speaks like that? A chuckle escaped my lips before I could stop it. Is that the best you can do? I wanted to ask. I pulled my hand, trying to extricate myself.

Oddly enough, he let me. I rolled onto my back and considered the goliath looming over me. His jutting chin obstructed my view of his face. As if he knew what I was thinking, he looked down so I could see the dark pits that served as eyes. Hunched like a Neanderthal, he towered over me, an evil smile revealing oversized teeth. They could have been tombstones they were so big. His jawline hardened into granite as I watched him.

“Now what?” he asked, his voice echoing in the small newly created canyon.

Good question, I wanted to say, but having felt the power of those solid fists, I felt it prudent not to volunteer anything. We had a good, long stare that seemed to go on forever.

Like me, you’re probably wondering how I got here.

My name is Grady Whill, and a little over twelve months ago, I was an average kind of guy in a mediocre middle school with a brilliant but nerdy best friend. 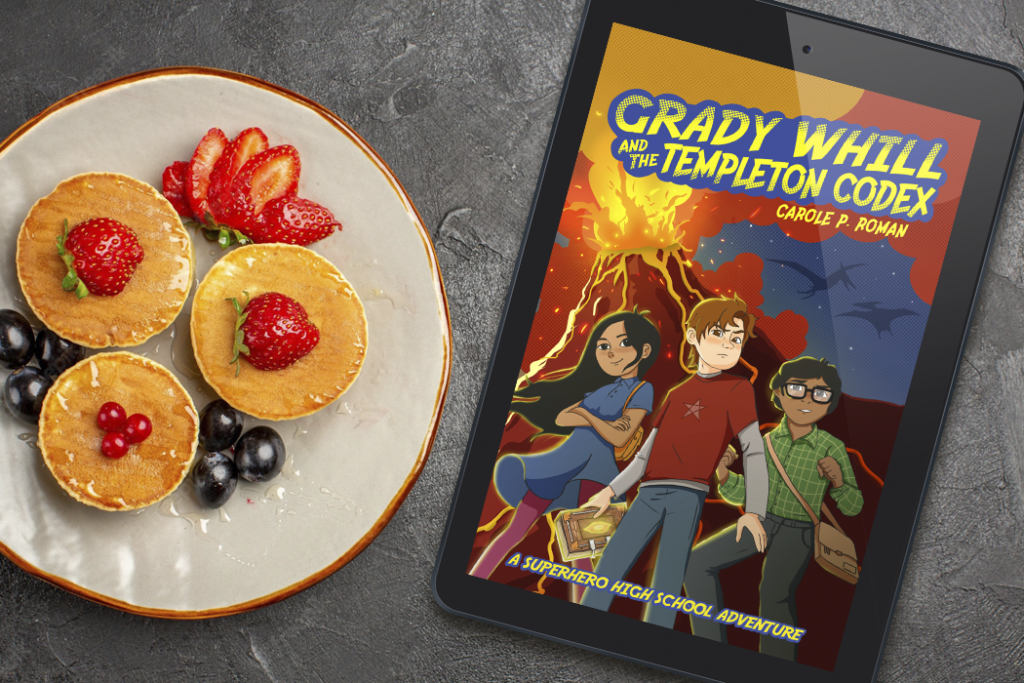 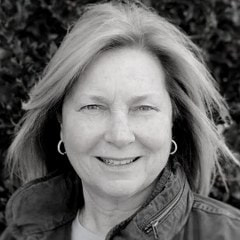 Carole P. Roman is the award-winning author of over fifty children’s books. Whether it’s pirates, princesses, spies, or discovering the world around us, her books have enchanted educators, parents, and her diverse audience of children of all ages.

Her best-selling book, The Big Book of Silly Jokes for Kids: 800+ Jokes! has reached number one on Amazon in March of 2020 and has remained in the top 200 books since then.

She published Mindfulness for Kids with J. Robin Albertson-Wren.

Roman is the CEO of a global transportation company, as well as a practicing medium.

She also writes adult fiction under the name Brit Lunden and has created an anthology of the mythical town of Bulwark, Georgia with a group of indie authors.

Writing is her passion and one of her favorite pastimes. Roman reinvents herself frequently, and her family calls her the ‘mother of reinvention.’ She resides on Long Island, near her children and grandchildren.

July 21
4covert2overt ☼ A Place In The Spotlight ☼

Aug 5
Inside the Insanity

Aug 15
Momma Says: To Read or Not to Read
The Book Dragon