I am thrilled to be hosting a spot on the SUNSET RISING Series by S.M. McEachern Blog Tour hosted by Rockstar Book Tours. Check out my post and make sure to enter the giveaway! 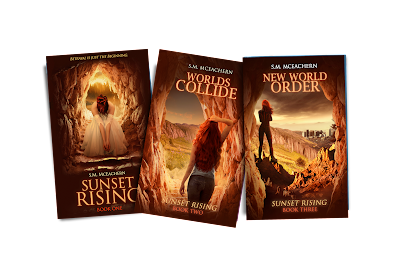 “This book has it all—love story, good vs evil, drama, and suspense. Definitely a book you can’t put down!” – Midwest Book Review

“I’ve seen it compared to The Hunger Games and I’d have to agree. I can already see the movie version becoming a hit!” Amazon Reviewer

– Deep inside a mountain in what used to be North America dwells the last of humanity. Welcome to the Biodome, where steel, rock and armed guards separate the privileged from the slaves.

– Born and raised a slave in the Pit, Sunny O’Donnell has always accepted that she’ll spend her life working to keep the Dome running and, if she lives long enough, willingly meet her end in the annual Cull when she reaches the age of thirty-five. This was the price her ancestors paid for their place inside the Biodome, the only safe haven from the global nuclear war of 2024. But when Sunny’s mother is killed in the Cull, the hopeless reality of her future becomes painfully clear.

– Bereft and disillusioned, she heads down a reckless path that sets off a deadly riot in the Pit and leaves her accused of treason. Her only way of escaping public execution is to make a truce with her prison mate, who happens to be the heir to the dictatorship and hated enemy of the Pit. Now caught between two worlds on the brink of war, Sunny must weigh her own survival against risking everything to save the Pit.

– S.M. McEachern delivers the action and adventure of The Hunger Games, the intrigue of The City of Ember, and the romantic notes of Les Misérables in her debut novel set in a future that is disturbingly plausible.

What Readers are Saying:

“One of THE BEST dystopian books I’ve ever read!! If/when this becomes a movie … I will be the first in line!” – Midwest Book Review

“Romance, intrigue, and action all come together beautifully here to create an experience that will leave anyone asking for more.” – Readers Favorite Gold Medal Award for best YA Dystopian

“… a romance straight out of a Shakespearean play, with the action of Katniss and Peeta.” – Amazon Reviewer

“I might even love this more than I loved Hunger Games (and that’s saying a lot!)” – Goodreads Reviewer

“I’ve seen it compared to The Hunger Games and I’d have to agree. I can already see the movie version becoming a hit!” – Amazon Reviewer

“I was a huge fan of the Hunger Games series and I actually loved Sunset Rising more! I am putting it on my top 10 list of most favorite books.” – Amazon/Goodreads Reviewer

“FABULOUS!!! I fricken loved this story! If you love Dystopian YA novels, READ THIS BOOK!” – Goodreads Reviewer

“This book truly blew my mind. It is pure GENIUS … (it’s) as good, if not BETTER, than the Hunger Games.” – Amazon Reviewer

“If you like Veronica Roth, you’ll like this. I’m glad I tried a new author!” – Amazon Reviewer

“Let me start off by saying this novel stole hours of my sleep. I could not put it down.” – Goodreads Reviewer 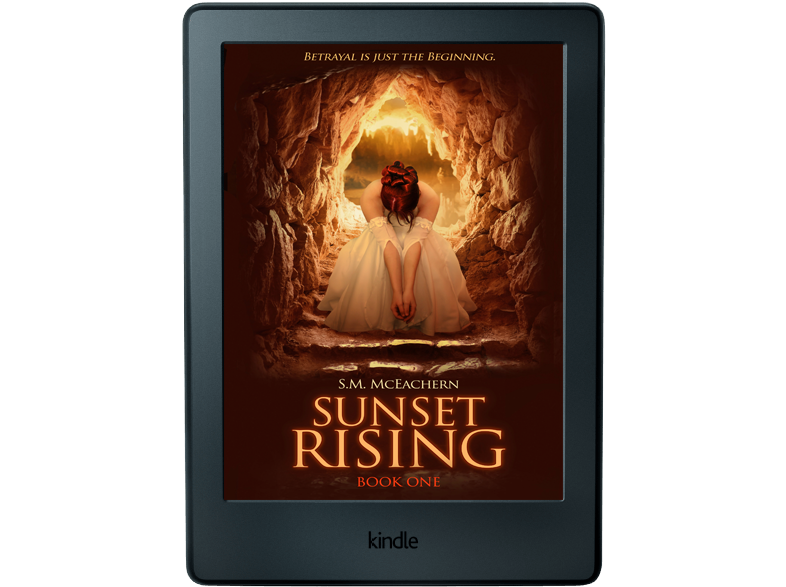 I found the rope and gave it a good tug to make sure it was secure. “Here. Use this to rappel down. I’ll go first and guide you along as best I can.” I scrambled over the side and began my descent.

“Wait!” Jack’s face appeared above me, terrified. “Aren’t you going to use the rope too?”

“I don’t need it. I’ve been doing this since I was five. And besides, I don’t think that old rope is going to hold two of us.”

I climbed down about ten feet to give him room. I heard him double- checking the rope. “Come on.”

I rolled my eyes. At this rate we were going to get caught for sure.

Finally, he lowered himself over the side, tentatively feeling around with one foot. I descended another ten feet and looked up to see if he was following, but he hadn’t made any progress. “Jack, you’re taking too long. Trust the rope.”

“You mean this old rope, Sunny?” he snapped. I bit back a laugh.

I heard him take a deep breath and watched him lean out. He lowered one foot, then the other, and again. He continued to rappel in a slow and steady rhythm. I descended another ten feet, thinking I probably shouldn’t be this close. If he fell, he would take us both down.

We continued on, me staying ten feet below Jack and encouraging him to keep going. He was painfully slow, but I tried not to get frustrated. I remembered it was hard the first time I did it, too.

Finally, we arrived at the sixth level and I pulled myself onto the landing. “Almost there, Jack.”

When his feet dangled just above my head, I gave them a little tug to help him along.

I let go of him. I didn’t need him screaming and bringing the guards in here. He lowered himself far enough to reach over to the landing. I grabbed him by the elbow and pulled him in. He hugged the side of the wall, testing to make sure his feet were firmly on the ground.

“That was the scariest thing I’ve ever done in my life.”

Scariest? He had no idea. “Welcome to the Pit, Jack.” 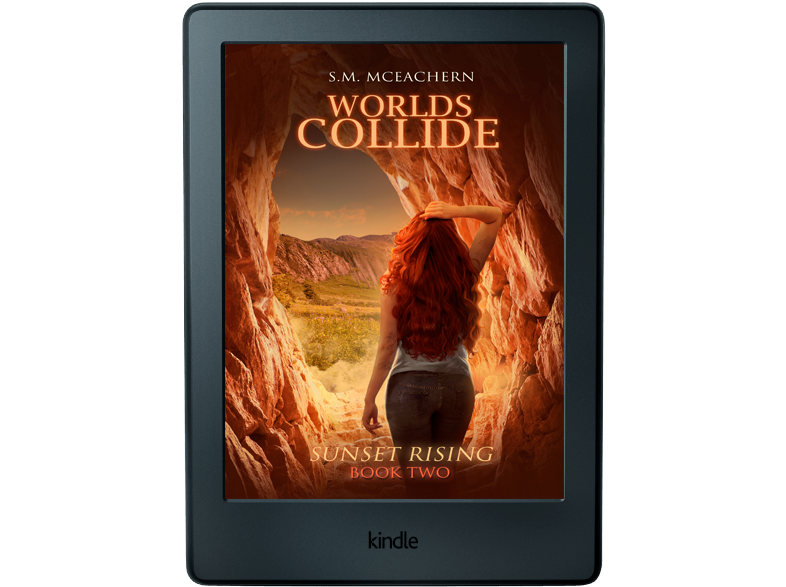 Water washed over my face, choking me. Desperately, I rolled onto my stomach in an attempt to keep afloat. I tried to find Jack, but all I could see was the river ending.

How could it just end?

As I was hurled over the edge, my body dropped like a stone. Water rained down on me as I went. I screamed, but the roar of the waterfall overpowered my voice. Then I was plunged back into the cold, silent, watery world.

I expected to bob to the surface, like I did the first time I hit the water, but the current swirled around me, holding me down. I opened my eyes and searched the murky depths for a ray of light to tell me the direction of the surface. I wasn’t sure which way was up, but it must be above me. That would make sense. Kicking my legs and moving my arms, I tried to get to the surface.

The urge to breathe was overwhelming. Too late, I realized that my screaming on the way down had pushed most of the air out of my lungs.

I raised my arms and flapped again, propelling myself forward. What little oxygen was left in my lungs escaped. I pulled through the water again, my arms feeling like they had weights attached.

Reflexively, I breathed in.

Water burned its way down my throat and into my lungs. My brain told my legs to move, to keep heading toward the surface, but all of my muscles felt weak. Relaxed. They didn’t want to move. I didn’t have control over my body anymore.

With a jolt, I realized I was dying.

Regret pressed in on me heavier than the water filling my lungs. I wasn’t ready to go yet. The Pit still needed me… and I still needed Jack. An image of his face popped into my head. I willed my limbs to move, to find the surface, but they wouldn’t cooperate.

A strange peacefulness came over me as I floated in my weightless world, the image of Jack becoming a happy memory.

I closed my eyes. 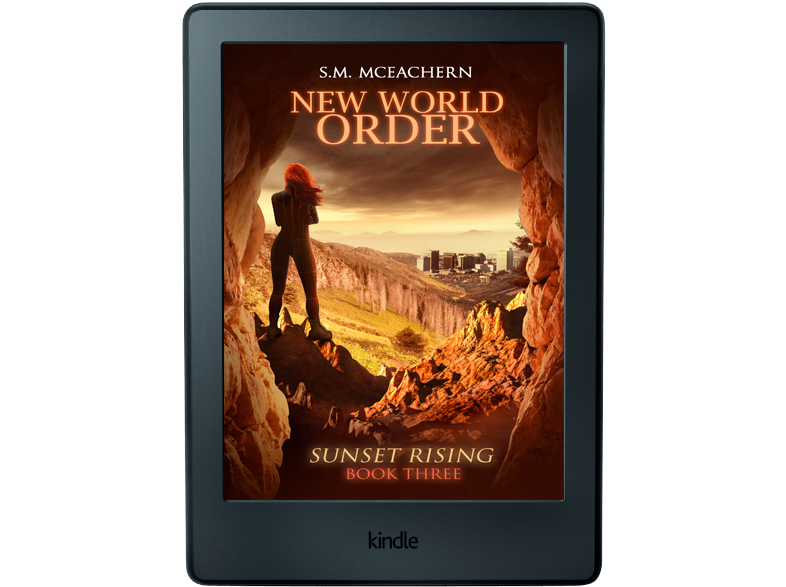 “Are you blaming the Pit for the fighting?” I asked.

She turned a sharp look on me, but within a few seconds her features relaxed. “I don’t know anymore. Alex, Jack, and I have been friends since we were kids. I knew something was—” She stopped talking and shook her head. “But Alex?”

My eyes shifted between looking at Hayley and navigating the path in front of me. “You know something, don’t you?”

She heaved a sigh. “Just rumors. And I never act on rumors.”

I didn’t push her for more information. The thread of trust that was growing between us was too weak to support rumors. Better to deal in truths.

We drove in silence for a while, and I allowed myself the indulgence of appreciating my surroundings. The trees were a little different from the ones I was used to seeing in the mountains, and their branches were thick with buds. There seemed to be more birds flitting through them and more animal burrows by their roots too.

Then we rounded a bend, and the sight that greeted us was so startling that I almost fell off my bike.

“What the—” Hayley breathed. At least she could form words. My mouth was too busy hanging open.

“There it is,” Eli said. He smiled broadly at our expressions. “The old city.”

It stretched as far as the eye could see. Tall, crumbling spires rising out of the forest like monolithic giants, their iron skeletons broken and rusted to a bloody brown. I had never seen anything like it. The old city Jack and I had explored seemed like nothing more than a village compared to the sprawling expanse of this kingdom. How many people must have lived there? Millions? More? Stark against the intense blue of the sky, the disintegrating spires were an ominous headstone for a civilization that had once ruled the earth. 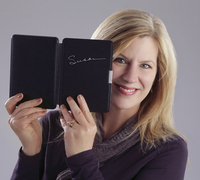 S.M. McEachern (who also writes new adult as Susan McEachern) comes from the rocky shores of Canada’s East Coast. She is a graduate of Dalhousie University, with an honors degree in International Development Studies with a focus on ocean development. Throughout her academic studies and early career, Susan had the privilege to study and work with Elizabeth Mann Borgese, daughter of nobel prize winner, Thomas Man). An author in her own right and a political activist for world peace, Mrs. Mann Borgese played a significant influence on Susan’s view of the political world stage.

2 winners will win eBooks of the SUNSET RISING series, International.