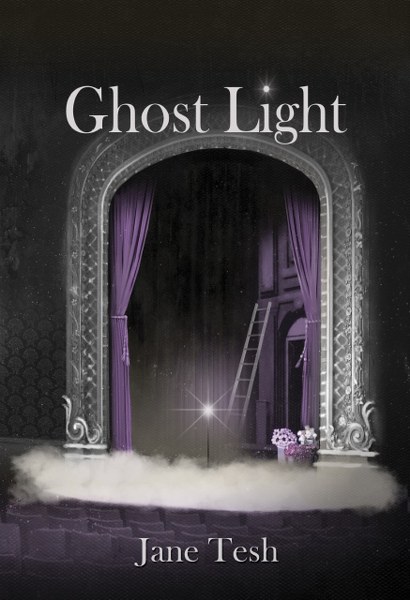 Theodosia “Teddy” Ballard knows nothing about community theater, but when the stage manager for “Little Shop of Horrors” takes a tragic header down the costume-loft stairs, she agrees to fill in for the sake of her actor friend, Will. Teddy takes the superstitions and swelled heads of The Stage in stride—till she meets George Clancy Everhart, the theater ghost, who informs her that the previous stage manager was murdered and demands that she find the killer. Both investigation and rehearsals are complicated when she makes a surprising discovery about her relationship with Will—and learns that George has his own dramatic agenda. 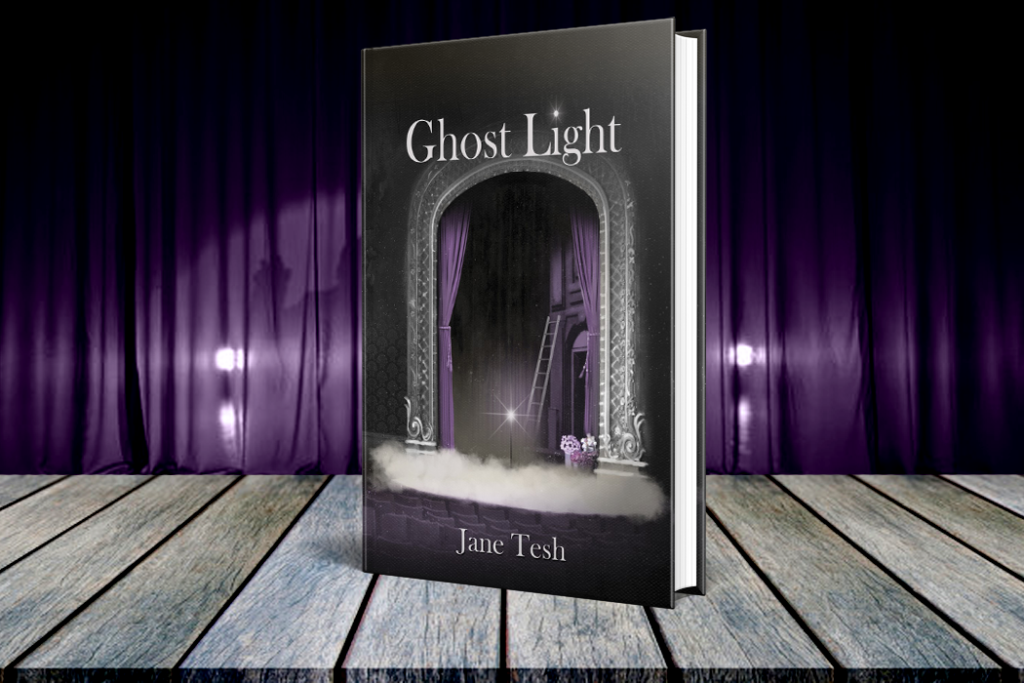 There was no way I had left a door open, but I got up and checked again. Must be a draft from somewhere in this old building. I retrieved the scattered pages and made sure they were in the right order.

I heard a thud as if something had fallen over backstage. Looking in the wings, I found a hammer on the floor. I put it back where it belonged and returned to my papers.

An overhead light flickered, red, then green, then white.

“All right, that’s enough.” I got to my feet for the third time. “Good joke, Will. Ha, ha. Now show yourself.”

“I beg your pardon, dear lady,” said a deep voice.

I stared in disbelief as a man appeared before me. He was tall and elegantly dressed in a three piece suit and cravat. His features were blurry, but he had an aristocratic air, a distinctive nose, and a satisfied smile.

He removed his bowler hat and bowed. “George Clancy Everhart, at your service.”

I didn’t know how Will had managed to create this image. This must have been some bizarre rite of passage for people new to the theater. Well, it wasn’t going to rattle me.

“Theodosia Ballard,” I said. “It’s a pleasure to meet you.”

“Theodosia! What a splendid name!”

“Teddy? That’s a boy’s name! You are a woman, and a very fine woman, at that. Such a magnificent presence! You should be on stage.”

“I am on stage right now, and I have a lot of work to do, so you can turn yourself off, disappear, whatever, just go away.”

He looked startled. “You don’t believe in me.”

“I believe you’re a really good special effect. Go on now, get lost.”

The image drew himself up. “My good woman, you are speaking to one of the premiere actors of the Twentieth Century. Why, I appeared in hundreds of plays during my lifetime. Thousands of performances! All to great acclaim!”

“Excellent reviews! Encores by the score!”

“Then why are you haunting a little theater in Rossboro, North Carolina? Shouldn’t you be in New York? London?”

He paused and put a hand to his heart. “You wound me to the core, Theodosia. In my later years, my career took a sad tumble. Like your lover William, I was unable to continue my passion for Broadway. I ended up here, disillusioned but undefeated.”

“Whoa, hold on, buster. Will is not my lover. And how do you know about his New York experience?” I’d had enough. “Will, stop this right now. It isn’t funny.”

“I agree, Theodosia. It is tragic. The boy has such talent, such a love for theater.”

“Stop it.” I moved to push the man away, but my hands went right through him, and I almost fell into the orchestra pit. A strong force shoved me away from the edge.

I caught my breath. “I don’t believe in ghosts. Why are you here?”

“Because you need my help,” he said.

“What do I need your help for?”

“Why, to solve the murder, of course! I liked Paula. She was efficient. I admired her work ethic. I do hope you have a strong work ethic, Theodosia.”

“Wait, wait. Go back to the first thing. Solve the murder? No one’s calling Paula’s death a murder!”

“But it was,” George Clancy Everhart said. “I saw it.”

“Your whole theater life’s in here,” I said. “Do you keep a scrapbook?”

“No, but you should see my mother’s. She has every ticket, every program, from me being a camel in first grade up to now.” He sighed. “I suppose she’s still doing that.”

My distraction plan was unraveling. “You have to know they’re proud of you. When’s the last time you talked to them?” Will’s parents had moved to Asheville, an arts friendly mountain town about three hours away.

“They came to see Noises Off.”

“Did they tell you how awful you were and that you should give up acting?”

“No. They said the play was hilarious and they enjoyed it very much.”

“I don’t know, Teddy.” He turned back to the picture from The Music Man. “I feel as if I’m standing in the reflection of their light, not my own.”

“You have plenty of light. You’re the lightest person I know.”

His eyes narrowed in mock offense. “Are you saying that because you think you can lift me?”

I grabbed him around the waist and tried to heave him off the sofa, which resulted in a brief wrestling match before we both fell on the floor and knocked the stack of scrapbooks over. Will managed to roll on top of me.

“Think again,” I said, and used both hands to smack his shoulder, pushing him off balance long enough to reverse our positions. “Now what are you going to do?”

He grinned up at me. “What are you going to do?”

What was I going to do?

I had a sudden oh my god what now moment, one of many I’d experienced during my lifetime. The first one had been in seventh grade when Bobby Alexander put his hand on my arm in Geometry class, and I’d stared at him until he withdrew. Later, I thought, should I have smiled? Patted his arm? He was a nice fellow, very friendly, but I missed some sort of signal and it was too late to go back. The next incident had been during a date that Grandmother Louise, worried about my lack of interest, had arranged with one of her friend’s sons. I’d forgotten his name, but we went to a concert, and halfway through, he reached for my hand and held it. What now? I remember thinking. I’m supposed to feel something, aren’t I? I’m supposed to do something, but what? More awkward dates followed until I’d had enough. I didn’t go to my high school prom, or have sex in the back of a car, or have a boyfriend to break up with and agonize over or any of those things I thought everyone did.

There was another incident not too many years ago. Jackie and several of my girlfriends invited me to go see a Chippendales show in Parkland. All I could think of was, Eeww, no. I did not want to see overly developed men with abdomens like alien turtles gyrate. Everyone else in the world thought these strange moves were sexy. What was wrong with me? I knew I wasn’t gay. I liked men. What was I?

Then there was Will. He was exactly the right size and shape, athletic, but not full of weird muscles. I liked looking at him, his hair, his beautiful eyes. I thought he was very handsome. But right now—I was at a loss. I’d seen enough movies and read enough novels to be acutely aware that right now, with me on top and him smiling up at me, this was a stereotypical situation when I was supposed to have overwhelming desire to lean down and kiss him, which would lead to a wild passionate make out session on the floor. Didn’t all this involve words like groping and heaving and thunder and lightning and so forth? Was this the point where I declared myself? 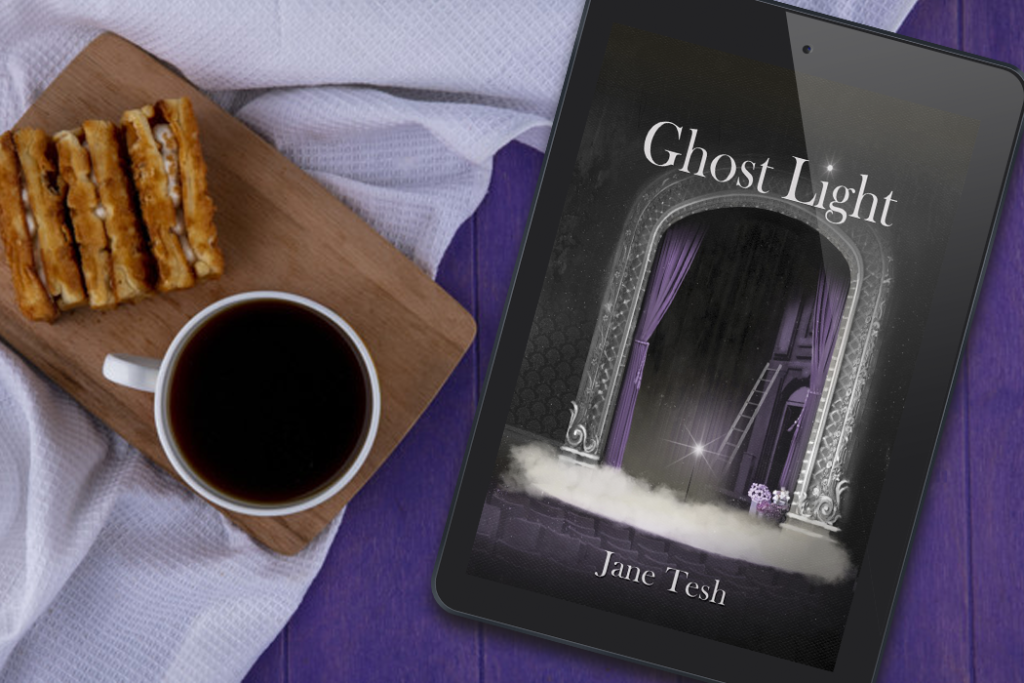 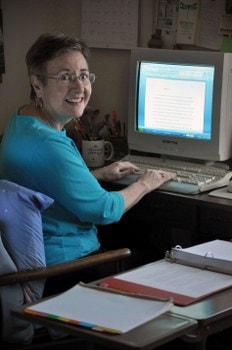 Jane Tesh, a retired media specialist, lives in Mt. Airy, North Carolina, Andy Griffith’s home town, the real Mayberry. She is the author of the Madeline Maclin Mysteries, featuring former beauty queen, Madeline “Mac” Maclin and her reformed con man husband, Jerry Fairweather, and the Grace Street Mystery Series, featuring struggling PI David Randall, his psychic friend, Camden, and an array of tenants who move in and out of Cam’s boarding house at 302 Grace Street. Ghost Light is her first standalone mystery and the first to feature an asexual heroine.

June 18
I’m All About Books

June 19
A Wonderful World of Words

July 5
Inside the Insanity

July 8
Momma Says: To Read or Not to Read
The Book Dragon