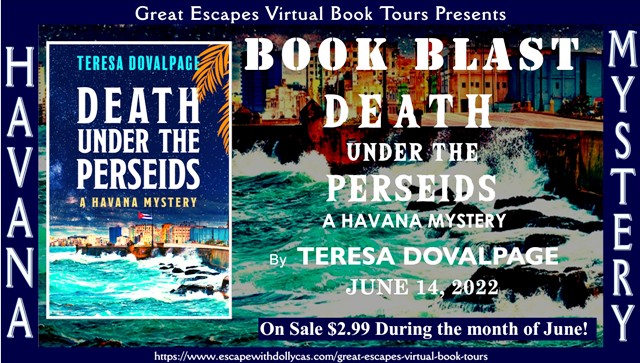 Death Under The Perseids (A Havana Mystery)
by Teresa Dovalpage

About Death Under the Perseids 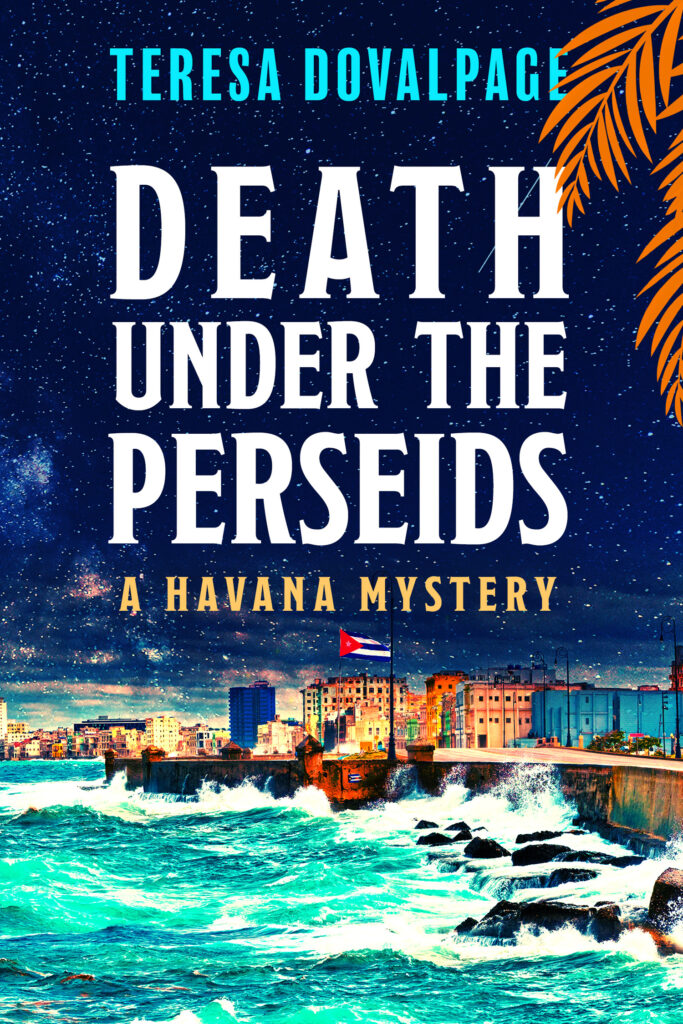 Death Under The Perseids (A Havana Mystery)

Cuban-born Mercedes Spivey and her American husband, Nolan, win a five-day cruise to Cuba. Although the circumstances surrounding the prize seem a little suspicious to Mercedes, Nolan’s current unemployment and their need to spice up their marriage make the decision a no-brainer. Once aboard, Mercedes is surprised to see two people she met through her ex-boyfriend Lorenzo: former University of Havana professor Selfa Segarra and down-on-his-luck Spanish writer Javier Jurado. Even stranger: they also received a free cruise.

When Selfa disappears on their first day at sea, Mercedes and Javier begin to wonder if their presence on the cruise is more than coincidence. Mercedes confides her worries to her husband, but he convinces her that it’s all in her head.

However, when Javier dies under mysterious circumstances after disembarking in Havana, and Nolan is nowhere to be found, Mercedes scrambles through the city looking for him, fearing her suspicions were correct all along.

Praise for Death Under the Perseids

“Dovalpage allows Mercedes a vivid, emotional tour of Havana as she explores the areas where she grew up and how the city still lives in her heart . . . Death Under the Perseids offers as many surprises as the meteor shower it is named after.”
—Oline H. Cogdill, South Florida Sun Sentinel

“From the start of Teresa Dovalpage’s Death Under the Perseids, a highly entertaining mystery set in Havana, there’s an ominous tone, a hint of something repressed beneath the main character’s narration . . . Like the Perseids meteor shower that once every hundred years or so lets us ‘look back across time’ in the universe, this trip to Havana forces Mercedes ‘with a biting awareness’ to confront her past.”
—Carole E. Barrowman, Milwaukee Journal Sentinel

“[Death under the Perseids] has wonderful descriptions of mouth-watering food, Cuban architecture, history of the island, and the lifestyle of an average Cuban (in this case, Mercedes’ grandmother).”
—Deadly Pleasures Mystery Magazine

“Beyond being a riveting and pleasurable read, Death Under the Perseids by Teresa Dovalpage provides an uncommon perspective on present-day Havana, one that is apolitical and unclouded by nostalgia . . . Savor the delectable food and evocative place details, the crafty plotting, and laugh-out-loud humor . . . Death Under the Perseids makes an outstanding contribution to the whodunit genre and to contemporary Latinx literature as a whole.”
—Latino Book Review

“Dovalpage excels in her portrayal of old Havana.”
—The Taos News

“Death under the Perseids is much darker than Dovalpage’s three earlier mysteries . . . A must for the shelf.”
—Kingdom Books

“Highly captivating . . . If Agatha Christie was Cuban, she would have written this mystery . . . Teresa Dovalpage’s expertly penned mystery, Death under the Perseids, is a character-driven revenge thriller.”
—Gumshoe Review

“[An] engagingly escapist mystery.”
—Everything Zoomer

“[T]he last third of the novel [Death under the Perseids] delivers revelations like hammer blows. They’re well worth waiting for.”
—Booklist

“Armchair travelers will appreciate the views of Havana through the eyes of Mercedes and her grandmother . . . Dovalpage remains a writer to watch.”
—Publishers Weekly

“Sharply-plotted, highly readable, evocative, and timely—Teresa Dovalpage’s latest is her best yet. Death Under the Perseids is an author at the top of her game, and a must-read for mystery fans who love great locations paired with even better characters. I couldn’t put this book down.”
—Alex Segura, acclaimed author of the Pete Fernandez Miami Mystery series and Star Wars Poe Dameron: Free Fall

“A twisty mystery filled with complex characters caught under a cloud of suspicion, Death Under the Perseids will keep you guessing until the end. Teresa Dovalpage transports readers to Havana on an ill-fated cruise where danger abounds.”
—Chanel Cleeton, New York Times bestselling author of The Most Beautiful Girl in Cuba

“In this tale of love and betrayal, Dovalpage reminds us that, much like the meteors that illuminate the night sky, so will the past catch up to cast a light on our darkest moments.”
—Melissa Rivero, Author of The Affairs of the Falcóns

On Sale During the month of June at Amazon $2.99 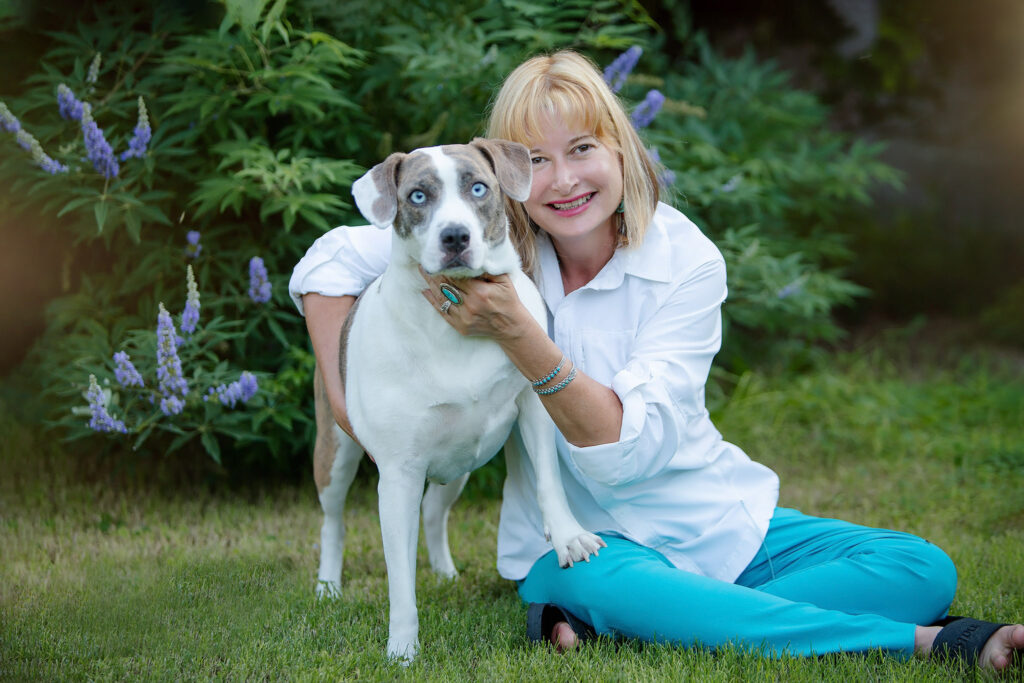 Born in Havana, Cuba, Teresa Dovalpage has a PhD in Hispanic Literature from the University of New Mexico and is currently a Spanish professor at New Mexico Junior College. She is also the author of twelve novels, three collections of short stories, and three theater plays. Her Havana Mystery series, published by Soho Crime, debuted with the culinary mystery Death Comes in through the Kitchen (2018). The second novel, Queen of Bones (2019) was chosen by NBC News as one of the top 10 books by and about Latinos in 2019. The third and fourth — Death of a Telenovela Star (2020) and Death under the Perseids (2021) — are set on Caribbean cruises. You can find more about her on her English blog or Spanish blog.

I Read What You Write

Escape With Dollycas Into A Good Book

Have you signed up to be a Tour Host? 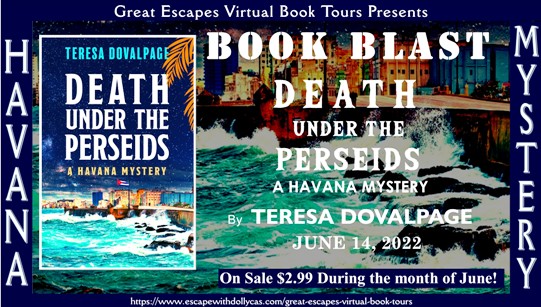 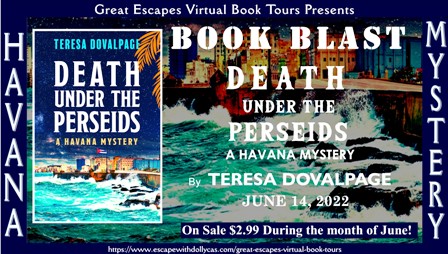 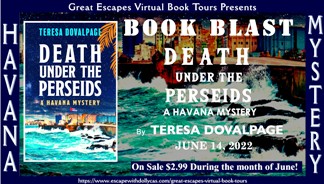