This is my post during the blog tour for Shadowdays by Polly Schattel. In Shadowdays a nurse with a troubled past becomes ensnared in a clash with a violent gang.

This blog tour is organized by Lola’s Blog Tours and the tour runs from 2 till 15 May. You can see the tour schedule here. 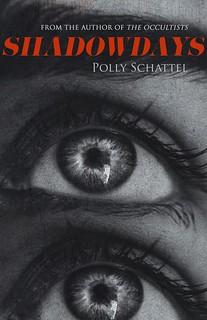 Melissa Sweet is in a delicate state. She’s a clinical nurse in a small town who, after a career-ending accident and the accusations of foul play that followed, is just now starting to put her life back together. She’s got her mom, her troubled brother, and her fiancé Jack to keep her grounded, and right now she’s taking life one uneasy day at a time. But tormented by a harrowing act of violence, she makes an impulsive move that changes her life—and the lives of those she loves—forever. This unleashes a disorienting cycle of brutality and revelation as she reckons with the blood of her own past and the blood of those who transgressed against her.

And it will force Melissa to confront the fiercest, most unrelenting monster of all: herself.

Praise for Shadowdays:
“… a tale that will leave readers squirming in discomfort but unable to stop turning the pages” –Booklist.

“Shadowdays will have you walking a razor’s edge between what’s real and what’s not. Either will break your heart. Schattel teaches you the meaning of guilt, and of grief, at a pace that leaves you breathless. This is pulp horror soaked in empathy, and it will cut you.” –Sarah Read, Bram Stoker Award-winning author of The Bone Weaver’s Orchard.

“Shadowdays has a gutpunch of an ending. You’ll see it starting to move in that direction in the novel’s climax, but it will hit you like a runaway freight train when it does. As dark as this one was—perhaps because of that—Shadowdays was a lot of fun. Recommended.” –Andrew Byers, Uncanny Books

Her first patient is a middle-aged black fellow named Carl Geary. Carl’s sweet and agreeable, in a stuttery, rail-thin, bouncy-in-the-knees kind of way, but since Melissa isn’t yet an expert on methadone or impairment assessment—which is one of the ways nurses can tell if their patients are lying to them to secure more of those precious little ruby pebbles—the appointment is led by one of the other nurses, a blotchy, short-haired woman named Karine Melissa watches as Karine takes Carl’s blood and blood pressure, his urine sample, and administers his daily dose. The whole thing takes less than half an hour. Easy peasy, what was she so afraid of? The shadow, Melissa reminds herself later while adjusting the height of the stool at her desk and scanning over the new employee manual, is always bigger than the thing itself.

Her first solo assessment is a young white guy named Seth Rainey. Seth’s folder mentions he’s a Lothario of sorts, or at least considers himself one. Melissa’s not worried—in her past life she enjoyed the back and forth with the patients, flirting with the old men, laughing with the salty old ladies, and keeping the young huggers at arm’s length. She learned this jiu jitsu in high school and college as a pretty young blonde—how to let the scouting hands scout, but not onto her. But Karine’s warning is firm and well-heeded, Seth can be very cute and very sweet and very disarming, he has an adorable young daughter, and he’s a proud and genuinely loving father. It’s a deadly trifecta.

Melissa gives a quick rap on the door and goes into the exam room to find him already sitting on the table. He’s slight, not much bigger than she is, wearing a faded Molly Hatchet concert t[1]shirt, the kind with one of those D&D paintings on them—warriors and bloody axes and skulls. Jack would love a shirt like that. Melissa never really understood what Southern rock bands had to do with fantasy, but hey, maybe that’s just her. A decade or so ago she had a boyfriend who would listen to that stuff—Matty, his name was, Matty Truitt. Matty was the one who got her started writing poetry, he was a devotee of Jim Morrison and Charles Bukowski and he had a gorgeous bouquet of red hair that held a curl more than any girl’s, Melissa would beg him to let her put it in curlers, to let her put a little makeup on him and doll his pretty face up, but he always refused. Instead, he blasted Molly Hatchet and ZZ Top and 38 Special and Marshall Tucker in his Plymouth GXT or whatever it was, and from what she heard there was certainly no Lord of the Rings crap in there, that’s for sure. That fantasy stuff was more the Led Zeps and the BÖCs and the Sabbaths, but what the hell did she know? Maybe there was some connection she was missing, she should ask Jack.

“Seth?” she says now, flashing her most practiced, most comforting but still hands-off professional professional smile. How easy it comes back, how good it feels to use it again. “Hi. I’m not sure how to pronounce your last name.”

Seth stares back, he probably isn’t used to having a young nurse working here, Melissa’s the youngest by far, by decades maybe. And he really is a cute guy—baby-faced, round-headed, with swept hair and a scraggly fringe of beard that almost but not quite disguises a pleasant grin. His eyes are narrow and deep-set, giving him a scampish cast, which will only become darker and deeper-set with the years. By middle age, if he ever gets that far, he’ll look positively devilish. “You’re new,” he muses, still looking her over.

About the Author:
Polly Schattel a writer and filmmaker who has written and directed three award-winning, internationally distributed feature films. Her first novel, “The Occultists,” was published by JournalStone in 2020. She’s taught Film Directing, Screenwriting and Film Editing in the NC University system, New York City and elsewhere. Proudly and passionately transgender, she lives in the mountains of Asheville, NC with her wife and three wild, vicious animals who love people food.

Giveaway
There is a tour wide giveaway for the blog tour of Shadowdays. 10 winners will each win an ecopy of Shadowdays by Polly Schattel. 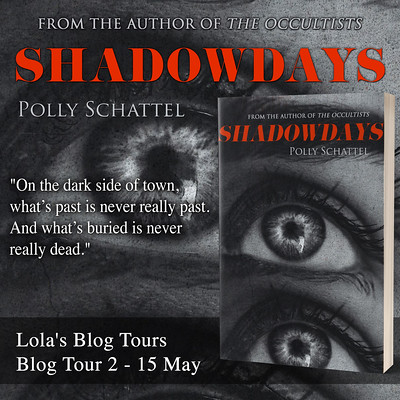