About Murder Next Door 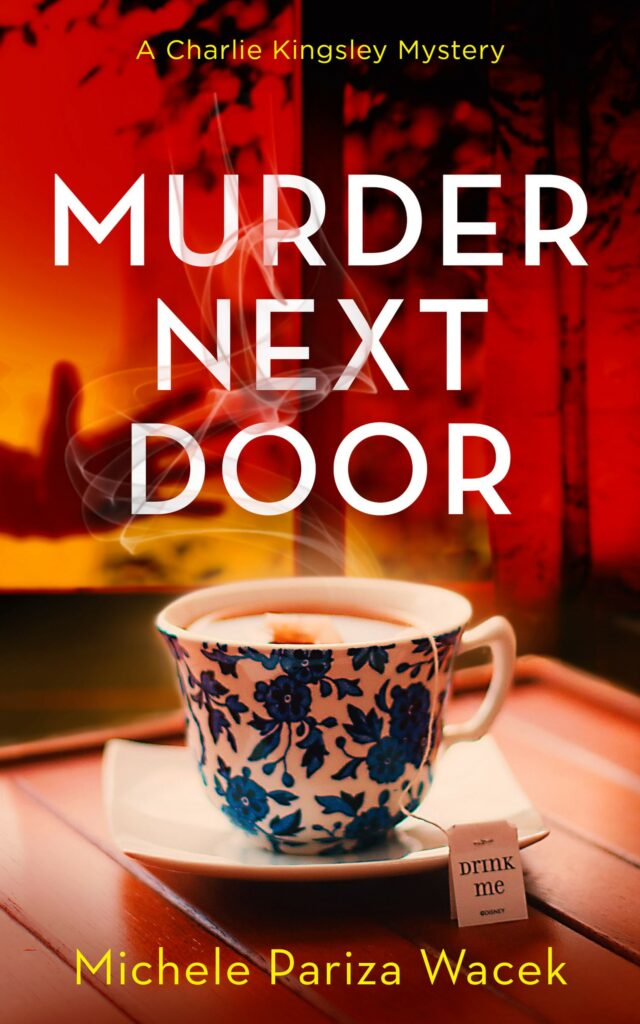 So when Mildred Schmidt, one of Charlie’s customers, is convinced that her next-door neighbor’s house sitter is actually a vampire, Charlie of course has to step in to see what is really going on.

What she finds is … disturbing. The house sitter DOES have some peculiar habits—like digging holes in the backyard in the middle of the night.

But then Polly, a local teenager, goes missing.

Of course, teenagers DO run away from time to time.

Less explainable is the dead body that then appears in the “vampire’s” yard.

Luckily, Charlie is hot on the case, and not a moment too soon as she races to not only find Polly, but to discover the killer before the bodies start to pile up.

Meet Charlie. Better known as “Aunt Charlie” from the award-winning Secrets of Redemption series. She’s back, making teas and solving cases in this funny, twisty, cozy mystery series set in the 1990s in Redemption, Wisconsin.

“Charlie!” Mildred, my tea customer, opened her door and ushered me inside, straight into a cloud of floral perfume so strong, I could feel my eyes watering. Her blue pantsuit was clean and pressed, and her grey, permed hair looked freshly styled, like she had just returned from the hairdresser. “Oh, you didn’t have to make a special trip for me. But since you’re here, come in, come in.”

“It’s no trouble,” I said, trying to unobtrusively dab the tears from my eyes still stinging from the overbearing fragrance.

Hopefully, they would quickly adjust. “I was running errands anyway, and your house was on my way.”

“Oh, you could probably use a break then. I’ll make you a nice cup of tea, and you can have a seat and just relax.”

Before I could answer, she was already bustling off toward the kitchen. I wiped my eyes for the second time and hung up my spring jacket. Then, I tucked my brownish-blondish-reddish hair (which was particularly wild and curly that day) behind my ears and made my way after her.

To be fair, I had expected this. Mildred was a sweet, albeit slightly overbearing, elderly woman. A retired school teacher who had never married and had no kids of her own, she had devoted her life to keeping a very close eye on all the happenings in her neighborhood, and then making sure whoever would listen was kept up to date.

I knew far more than was healthy about the marital life of the Thompsons (“He drinks too much, but I don’t know if I can blame him, as she’s always coming home late from work … I can’t remember the last time she cooked a nice dinner for him”), the family life of the Swanns (“Jamie is running for student council president, and little Teddy was on the JV basketball team … can you believe it?”), and Mrs. Miller’s pregnancy (“She is so huge … I’m sure she’s having twins”).

Yes, Mildred was a bit of a busybody, but she was harmless and lonely, so I didn’t mind spending a little time with her when I dropped off her orders.

I ran a tea and tincture business out of my home, so I was typically out and about delivering orders at least a couple of times a week. I had a handful of clients who always asked me to stay and visit, so I made a point of spreading their deliveries out over different days, allowing me the time and space to chat with them. This was Mildred’s day.

“Oh my goodness, I have so much to tell you,” she said excitedly as she placed a pot of tea and platter of shortbread cookies in the middle of the table. The teapot and matching cups were made of a delicate white china and sported a pink rosebud pattern. Rimmed with gold, they were quite lovely. “You would not believe what just happened with the Thompsons.”

I listened to her prattle as I nibbled on the cookies and sipped my special blend of chamomile and rose petal tea that she always saved for my visits. As always, her kitchen was bright and cheery as the sunlight slanted through the sparkling windows. The scent of lemon and bleach was barely detectable under her perfume. Even her orange tabby sleeping in his basket in the sun matched the yellow and white decor.

“But that’s not even the most important news,” Mildred continued after recounting her very pregnant neighbor’s emergency hospital trip. Apparently, Terri had thought she was in labor, and Mildred kindly offered to drive her to the hospital, but it ended up being a false alarm. Mildred took a deep breath and a quick sip of tea, making a slight face in reaction to it having grown cold. “Jonas seems to have hired a housesitter.”

“Really?” Jonas lived in the house right next door to Mildred. He was a middle-aged single man who worked in the Redemption post office. I rarely heard about him, as it seemed all he did was go to work, come home, heat up a microwave dinner, and eat it in front of the television while enjoying a couple of beers before going to bed and repeating it all the next day. Needless to say, Jonas didn’t garner Mildred’s attention the way the rest of her far more interesting neighbors did.

Mildred bobbed her head up and down as she reached for the teapot to top off her cup. “I know. I can hardly believe it myself. I was sure he would have mentioned something if he was planning a trip, but he didn’t breathe a word to anyone. I can’t even remember the last time he took a vacation.”

“Maybe he was saving up his vacation days,” I suggested.

Mildred frowned. “Well, that still doesn’t explain why he didn’t tell anyone. I mean, I have no idea when he left or when he’s coming home! It’s very upsetting.”

“His car is gone,” Mildred said.

“He parks his car outside?”

I tried hard to keep my expression neutral. “You … looked in his garage?”

“Of course! I hadn’t seen him leave for work or come home for a few days, which made me worry he was sick or hurt and needed help. So, I went over to check, but no one answered the door. Well, I was beside myself. Did he have a heart attack? Stroke? Or maybe he slipped in the shower and was lying there in the tub, wet and cold and starving for days on end! I mean, how could I do nothing, knowing he might be suffering? I debated calling the police, and I would have, but I also didn’t want to bother them with such a matter when I was sure they had better things to do. I certainly didn’t want to waste taxpayers’ money, especially when there was an easier solution.”

“Of course,” I murmured, hiding my smile against the cup.

“So, before I called anyone, I decided to check the doors, on the off chance one was unlocked. I started with the garage. It was locked, of course, but when I peered into the glass, I saw his car was gone, and there was a different one in its place.”

Mildred pursed her lips. “That thought crossed my mind, too, but the one in there now is old. Much older than Jonas’s. I can’t imagine why he would trade his in for that. Remember, Jonas bought his car just a few years ago, so it’s still nearly brand new. Plus, it has an Illinois license plate, and that doesn’t seem right at all.”

“You were able to see the license plate from outside?”

I blinked. “I thought you said the garage door was locked.”

“I meant the door to the house,” Mildred said. “That was locked.”

She stared at me, sipping her tea, an innocent expression on her face. Briefly, I wondered if the side door that led to the garage was unlocked, as she seemed to be implying, or if her busybody skills included lockpicking.

I decided I didn’t really want to know.

“So, is that when you realized Jonas was gone?”

“Well, that’s what I thought, but I decided I’d better call his employer just to make sure everything was on the up and up.”

“They said Jonas was on vacation for a month. A month! Can you believe it?” She shook her head. “He hasn’t had a vacation in years, and now he decides to leave for a month? And not tell anyone?”

“Well, clearly, it was overdue,” I said.

“I suppose. But he still should have let the neighborhood know. I could have kept an eye on his house for him, instead of him inviting a weird housesitter to stay.”

“You met his housesitter?”

She shook her head. “Not yet. I’ve gone over there twice to introduce myself, but there was no answer when I knocked. And I know he was there, because his car was in the garage. Talk about not being very neighborly.”

“No, that doesn’t sound very neighborly,” I said. Of course, Mildred skulking around in the garage wouldn’t have anything to do with him not answering the door, I thought, but refrained from verbalizing it.

“But I did see him,” Mildred continued. “Once. He was walking around the yard in the middle of the night. I couldn’t imagine what he was doing out there. How could he see anything?”

“Maybe he heard something in the yard, like an animal or something.”

“I didn’t hear anything,” Mildred said. “I’m sure there was nothing there. But that’s not even the strangest thing about him. Come.” She heaved herself out of the chair and beckoned me to follow her to the window.

“See that?” She pointed to the nondescript ranch house next door. As far as I could tell, it looked as it always did.

She sighed. “The windows! See how the shades are pulled down?”

Indeed, all the shades were tightly closed.

“Why would he pull all the shades on such a nice day?” she asked.

Maybe to keep out noisy neighbors who had no qualms poking around in other people’s garages, I thought. Instead, I said, “Maybe he works nights and sleeps during the day.”

I had to admit, it was a little peculiar. “Maybe he’s an artist or writer and has strange hours.”

“Maybe. But still, it’s not normal.” She put her hands on her hips as she shook her head. “I just don’t know what this neighborhood is coming to.” 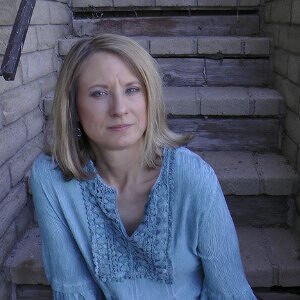 When Michele was 3 years old, she taught herself to read because she wanted to write stories so badly. It took some time (and some detours) but she does spend much of her time writing stories now. Mystery stories to be exact, ranging from psychological thrillers to cozies, with a dash of romance and supernatural thrown into the mix. If that wasn’t enough, she also hosts a virtual book club you can check out and join (for free!) at MPWNovels.com.

Michele holds a double major in English and Communications from the University of Wisconsin-Madison. Currently, she lives in the mountains of Prescott, Arizona with her husband Paul and southern squirrel hunter Cassie.

April 26 – Escape With Dollycas Into A Good Book – REVIEW

April 26 – My Journey Back – CHARACTER INTERVIEW