NERD BLAST & GIVEAWAY ~ LOUISA JUNE AND THE NAZIS IN THE WAVES by L. M. Elliott

Praise for LOUISA JUNE AND THE NAZIS IN THE WAVES

“Evocatively threaded with the scents and sounds of Tidewater Virginia coastal communities, this story presents a fascinating, lesser-known aspect of the war told from a young girl’s perspective. Successfully tackling the devastation of depression on family relationships, the bitter cost of war, and the uplifting strength of no-nonsense friendship, this story has impressive depth. Superb.” —Kirkus Reviews (starred review)

“Elliott weaves a deeply moving historical tale, including small but significant details that flesh out the situations and characters, even the secondary ones. The extensive and fact-filled backstory in the author’s note gives readers even more context. An excellent middle-grade read that balances adventure, emotions, and family.” —Booklist (starred review) 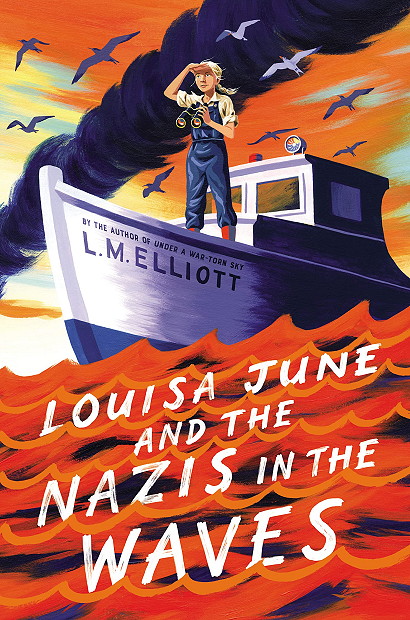 In this moving and timeless story, award-winning author L. M. Elliott captures life on the U.S. homefront during World War II, weaving a rich portrait of a family reeling from loss and the chilling yet hopeful voyage of fighting for what matters, perfect for fans of The War That Saved My Life.

Days after Japan’s attack on Pearl Harbor in 1941, Hitler declared war on the U.S., unleashing U-boat submarines to attack American ships. Suddenly, the waves outside Louisa June’s farm aren’t for eel-fishing or marveling at wild swans or learning to skull her family’s boat–they’re dangerous, swarming with hidden enemies.

Her oldest brothers’ ships risk coming face-to-face with U-boats. Her sister leaves home to weld Liberty Boat hulls. And then her daddy, a tugboat captain, and her dearest brother, Butler, are caught in the crossfire.

Her mama has always swum in a sea of melancholy, but now she really needs Louisa June to find moments of beauty or inspiration to buoy her. Like sunshine-yellow daffodils, good books, or news accounts of daring rescues of torpedoed passengers.

Determined to help her Mama and aching to combat Nazis herself, Louisa June turns to her quirky friend Emmett and the indomitable Cousin Belle, who has her own war stories–and a herd of cats–to share. In the end, after a perilous sail, Louisa June learns the greatest lifeline is love.

You can purchase Louisa June and the Nazis in the Waves at the following Retailers: 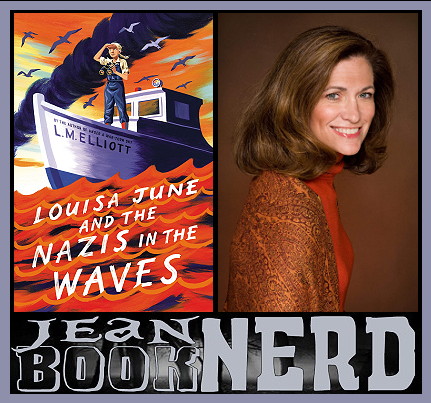 L. M. Elliott was an award-winning Washington-based magazine journalist, covering women’s issues, mental health, and the performing arts, before becoming a New York Times best-selling author of historical and biographical fiction. Her novels explore a variety of eras (the Italian Renaissance, the American Revolutionary War, WWII, and the Cold War), and are written for a variety of ages. Many of her works have been named NCSS/CBC Notables (National Council of Social Studies and Children’s Book Council), Bank Street College Best Books, Jefferson Cup Honor Books, Kirkus Bests, and Grateful American Book Prize winners. Elliott holds a BA from Wake Forest University and a master’s in journalism from UNC-Chapel Hill. She is a lifelong Virginian and history-lover.