RELEASE BLITZ ~ Shadow of the Shapeshifter by David Lee Stone

Book One of the Vanquish Trilogy

Two strangers in the wrong place at the worst possible time…

….a lone assassin prepared to do the dirtiest of jobs…

…and a guard sentry determined to stop him.

A dark enemy is about to rise in Illmoor, something even more chaotic and twisted than the citizens themselves. Step forward Enoch Dwellings, master sleuth, who boasts a reputation built entirely on an intricate web of carefully calculated lies. Together with his hapless but increasingly inept assistant, Doctor Wheredad (no medical training whatsoever), he will do anything it takes to solve a crime that might actually end up costing him more than his own life. 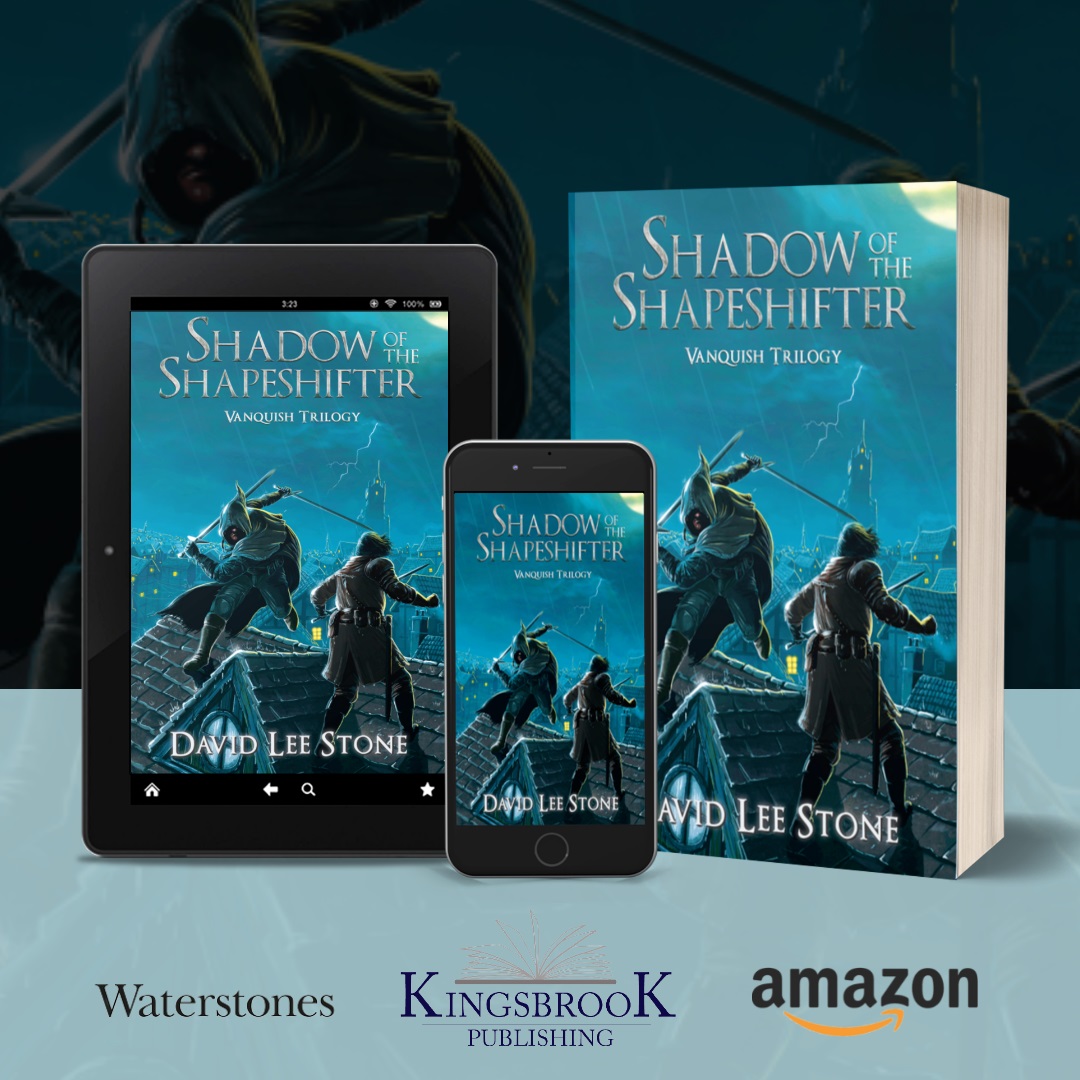 Having been caught short of common sense in the wilderness north of Crust, they’d been delighted to discover a dilapidated coaching inn amid the fierce woodlands. However, their delight had soon changed to dubious apprehension when the place turned out to be full of strangely inhospitable locals. They could forgive the sniggering dwarves at the corner table and the odd looks from the group of farmers huddled beside the bar, but there was something seriously amiss with the hooded man who sat next to the fire, rhythmically cracking his jaw, not to mention the deeply lugubrious innkeeper hulking behind the bar who was quite clearly two teeth short of a beaver. To make matters worse, there was now a silent yet unsubtle exchange running between the two, albeit from far ends of the room.

‘I bet it’s about us,’ said the first traveller, licking his trembling lips. ‘Did you see that bit where the innkeeper walked his two fingers along the bar top? That might be code for “hitchhikers”…’

The second traveller rolled his eyes.

‘Oh, don’t be so paranoid,’ he said, smiling nervously.

‘I’m not being paranoid – why aren’t they just speaking to each other, like normal folk?’

‘Perhaps they don’t want the farmers listening in.’

‘Ha! I doubt that. Look: the bloke beside the fire just ran a finger under his jaw – ‘sa death signal, that! I just knew it was a bad idea to come in here! I mean; what kind of place is open at nearly three o’clock in the morning…?’

Time passed. One by one, the farmers began to drink up and head out into the early darkness. They were followed by the dwarves, who were all the worse for drink. Eventually, the inn became quiet, with only a crackle from the fireplace to hold back the silence.

‘Let’s get out of here; please,’ whispered the first traveller, anxiety creeping into his voice.

‘And go where? There probably isn’t another inn for miles, at least not one that’s open! Besides, we haven’t even finished our drinks…’

The traveller stared down at the tankards.

‘I don’t like this ale, anyway,’ he muttered. ‘It tastes funny. I tell you, this place is knee-deep in the bad stuff…’

The man beside the fireplace abruptly folded his arms, then seemed to change his mind, and reached up to caress his jutting jaw.

The first traveller leaned close to his friend.

‘You’re not telling me he’s balanced,’ he whispered.

‘Why, just because he’s not running over here to engage us in conversation?’

‘No, because he’s wearing a hood and playing with his jawbone: that’s proper mental.’

His friend gave a dispassionate shrug.

‘Look, I’m cold, I’m hungry, and I’ll be damned if I’m walking through the woods for another six miles. I’m staying here and that’s that!’

‘Fine,’ snapped the traveller, snatching up his backpack and clambering to his feet. ‘Well, just so you know, the innkeeper has dried blood all down the back of his coat: I saw it as I ordered the drinks…’

The traveller slung on his pack and departed. When the door had slammed behind him, his friend made a disgruntled face and took another large swig of ale: it did taste funny, he had to admit.

The clock struck three. As the last of its chimes sounded throughout, the door of the inn creaked open, and a thin, spindly man with bulbous eyes and a strangely active tongue sidled his way in.

‘We’ve got it, massster,’ he spat, apparently addressing the hooded man. ‘It’sssss in the yard.’ That said, he hurried outside again.

The traveller looked on in a not-looking-on sort of way as the stranger beside the fire got carefully to his feet and followed.

‘Open up the back,’ the stranger called, as he passed the table. ‘I’ll give them a hand.’

‘Right you are,’ the innkeeper shouted after him, stomping off into the dark recesses of the inn.

Then, there was silence.          As the room’s enormous fire crackled away, the traveller – now totally alone in the bar – began to feel very uncomfortable.

‘Maybe it’s an ale delivery or something,’ he said to himself, but aloud, so the room didn’t seem quite so menacing. ‘Yeah, that’ll be it: an ale delivery.’

Then it happened: a terrible scream, a cry of pain that pierced the silence of the inn and nearly caused the traveller to bite clean through his tongue. He jumped to his feet.

‘What the hell was that?’ he gasped, glancing around at the empty room. There was still no sign of the innkeeper.

He quickly snatched up his backpack, left an overly generous tip on the table and made his way to the door, but he hadn’t gone more than ten steps when a deep, booming voice said:

‘And where do you think you’re going?’

The innkeeper had appeared at the bar, his spindly associate standing beside him.

‘I – er – thought I might head off…’ the traveller said with a forced smile, sweat beginning to bead on his brow.

There was a ‘click’ from behind him, and the traveller spun around: the hooded stranger from the fireplace had re-entered the inn and was lowering a bar across the door.

‘Wh-what are you doing? What is this?’

He made to step around the man, then thought better of it and turned back to the innkeeper.

The innkeeper smiled, displaying a grim formation of broken teeth, but neither he nor his snake-like companion spoke a word.

‘LET-ME-OUT!’ said the traveller, gritting his teeth, partly to show some mustard but mainly because it stopped his jaw from shaking. ‘I’m going home, do you hear me? I don’t belong here!’

‘Oh, we know that,’ whispered the hooded man, putting a hand on the traveller’s shoulder. ‘But tonight, for us, is a very important night, when something we’ve planned for a very long time has come to pass.’

‘Nothing. It’s got nothing at all to do with you, but when your friend left earlier, he did so at a very inopportune moment…and he saw someone that he shouldn’t have seen. He was in the wrong place at the worst possible time…as are you.’

The traveller’s eyes filled with tears, and his lips began to tremble.

‘Not good enough. Besides,’ the stranger said, removing his hood. ‘You’ve seen my face.’

The traveller stepped back, his jaw dropping. ‘B-b-but I don’t understand: aren’t you Viscount-‘

There was a sudden, sickening thud and then…there was silence.

Between 1998 and 2016, David wrote fantasy and YA books for some of the biggest publishers in the world. These included The Illmoor Chronicles (for Disney and Hodder), Gladiator Boy and Undead Ed (for Hodder and Penguin), Davey Swag and Outcasts (for Hodder). His books have been converted into audio works for BBC Worldwide and Random House and translated into fifteen different languages by companies including Sony in Japan. David’s short stories have also appeared in a variety of anthologies, including the celebrated Knights of Madness (with Terry Pratchett, Tom Sharpe, etc) for Orbit and Penguin, edited by the late and great veteran fantasy anthologist, Peter Haining. David has also written review columns for Interzone and SFX and fictional histories for Games Workshop and their Warhammer universe.