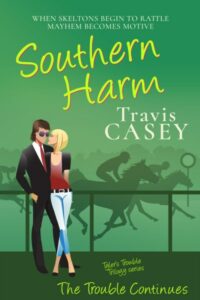 Twenty-seven years after Tyler left his troubles behind in his trilogy, he has a son, Oscar, who is proving to be a chip off the old block. As Kentucky’s most eligible bachelor, he has everything–including a gambling problem. After getting on the wrong side of a notorious loan shark, Louie Gomez, Oscar Novak-Chambers must use his family’s good standing with the governor’s office to obtain a monumental favor to clear his debt. He targets the governor’s daughter, Stacey Davenport. Sweet she is not. Ruthless she is–and she’s looking to bring down Kentucky’s criminal hierarchy–and Louie Gomez with it. But Stacey is no angel. When her skeletons begin to rattle, mayhem becomes motive. 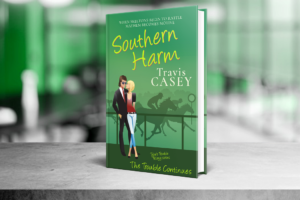 Conrad swung the double doors open, prompting Oscar and the governor to stand. With a dash of pomp, the butler moved aside. Stacy Davenport bounded into the room looking as though she may have just stepped off the tennis court.

Oscar’s eyes took a hike from her ankle socks to a single strand of hair on the top of her head, which had separated itself from the rest of her hair by standing at attention from a bolt of static electricity. In between, he didn’t miss an inch of her athletically toned body. She flashed emerald green eyes at her father and gave Oscar little more than a polite nod.

Oscar’s heart tempo increased. He checked her hands. She was free of matrimonial jewelry, which allowed him a more lustful gaze as she strode toward him.

“Stacey, this is Oscar,” Governor Davenport said as she stood in front of them.

She extended her hand. “Oscar? I’m guessing you’re named after the gold statue, not the hot dog.”

He wasn’t sure how to take that but decided to ignore the comment. “That’s something you’d have to take up with my mom and dad. I didn’t have a lot of say in the matter.”

The stared at each other, sizing one another up.

The governor bounced on his toes. “Stacey, Oscar’s going to be your golfing partner in Cincinnati.”

“Umm, no he’s not. I told you, I’m playing with Jett Johnson. My boyfriend.”

The governor closed the gap between them. “This is a state thing, Stacey. You need a partner from Kentucky.”

Her eyes narrowed. “Jett spent a summer vacation in Bowling Green visiting his grandparents. That has to count for something.”

Davenport spoke in hushed tones, aimed at Stacey. “Darling, Oscar’s family are good people to know.” He raised his voice to a bellow. “Besides, is this Jett Johnson a pro golfer? No. He’s a baseball player. One member of the team needs to be a registered golf professional.”

The governor twisted, addressing Oscar with a dip of his head, offering confirmation.

“Yes … yes, I am. I look forward to your company on the course, Stacey.”

Stacey sharpened her tone, addressing her father. “And this is what you want?”

“Yes, it is. And what’s more, it’s not open for discussion.”

“Fine.” She folded her arms across her chest. “I hope you know what you’re doing, Father. Jett was giving me lessons and we were getting pretty damn good.” She sighed, then flipped her bangs out of her eyes. “Well, Oscar, looks like we’re a team. I hope you’re as good as you say you are. I know how important it is to my dad that we beat the team from Tennessee and gift him bragging rights in the battle between the moonshine states.”

Oscar gave a reassuring smile. “I’ll do my best.”

“Right …” she crooned. “Is that along the lines of, ‘It’s not a matter of winning or losing, but how you play the game’?”

“Are we allowed to have fun while we’re winning?” He hoped to get a chuckle out of her to lighten the atmosphere.

Her cool demeanor deepened. “Just so you know, Oscar, I have the Coach Lombardi mentality: ‘Winning isn’t everything, it’s the only thing.’ And the only person who hates losing more than my father is me.” 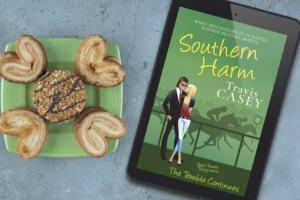 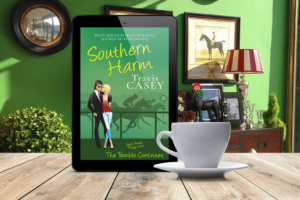 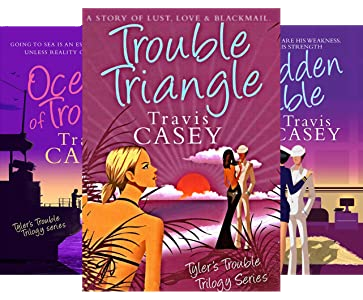 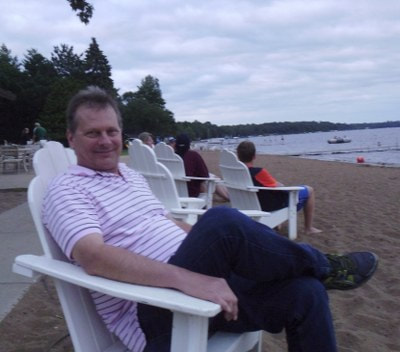 Travis was brought up in Midwest America before embarking on a nine year Navy career that allowed him to travel the world and learn about life. He has ping-ponged across oceans moving from mainland United States to Hawaii, to Scotland, to Seattle, to England, to Minnesota, back to England, and back to Minnesota where he currently resides … for now

He writes easy-reading, light-hearted fiction and true stories about his own experiences that even the best fiction writer couldn’t make up. Relax by the beach or curl up on the couch on a rainy day while Travis takes you on fun-filled adventures that let you forget about life for a while and have a laugh.

Apr 2
Momma Says: To Read or Not to Read
Sylv.net
Writing Dreams