“For readers who want more herstory in history.” —Booklist

“…an ethnically inclusive selection of real-life women who commanded ships, wielded cutlasses, and struck fear into the hearts of others.” —Publishers Weekly 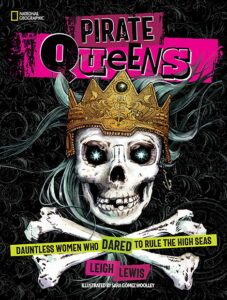 Ariane Szu-Tu at National Geographic Kids has bought Pirate Queens: Dauntless Women Who Dared to Rule the High Seas by Leigh Lewis, a middle grade nonfiction title that combines verse poetry, illustrations, and nonfiction to explore important and often unheralded women throughout history who were powerful pirates in their own right. Publication is set for January 2022; Elizabeth Harding at Curtis Brown Ltd. handled the deal for world rights. Illustrations by Sara Gómez Wooley.

From Ching Shih, a Chinese pirate who presided over a fleet comprised of some 80,000 men (Blackbeard had 400!), to Anne Bonny who famously ran away from an arranged marriage to don trousers and brandish a pistol in the Bahamas, to Sayyida al Hurra, an Islamic queen who ruled the Western Mediterranean, this edgy illustrated book proves that since ancient times women have made their mark in all aspects of history—even pirate lore.

Reviewed by some of the world’s leading pirate experts and historians, Pirate Queens showcases six gutsy women who dared to rule the high seas.

You can purchase Pirate Queens at the following Retailers: 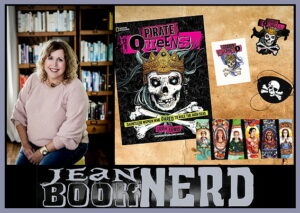 Leigh Lewis is a children’s writer whose middle-grade debut, Pirate Queens: Dauntless Women Who Dared to Rule the High Seas (National Geographic Kids), spotlights six fierce female pirates, telling each of their stories in verse. Leigh’s adventures on the high seas have enabled her to call many places home, including Turkey, Greece, England, Japan and Russia, and she eventually navigated her way back to her hometown of Columbus, Ohio. Leigh spends her time there dreaming up stories for kids of all ages, buoyed by an amazing crew—her Turkish delight of a husband and their three swashbuckling daughters.

Sara Gómez Woolley is an award-winning Latina illustrator, graphic novelist, and educator living and working in Brooklyn, NY. Her children’s book Charlotte and the Quiet Place received a Foreword Reviews INDIES Book of the Year Gold Medal and an IPPY Award Silver Medal, and has been featured in Creative Quarterly: Journal of Art and Design.