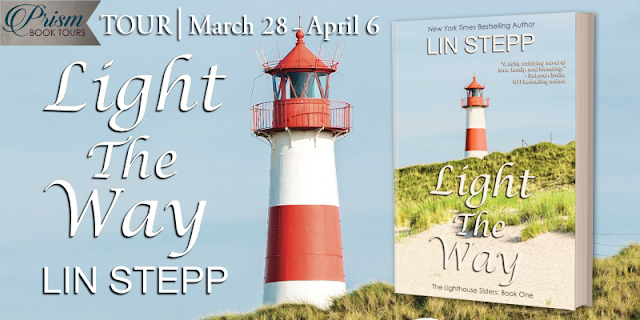 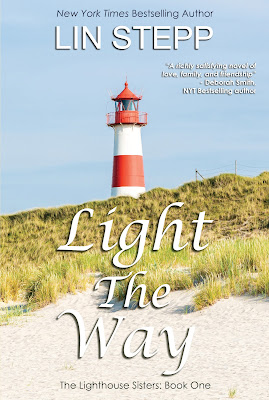 (The Lighthouse Sisters #1)
By Lin Stepp

In this new coastal series, Lin Stepp transports her readers into the rich, colorful lives of Burke and her sisters, Lila, Gwen, and Celeste, who grew up at the Deveaux Inn and Lighthouse on a windswept island, accessible only by boat. Get ready to be introduced to the ups and downs, joys and sorrows, challenges and adventures of a Lighthouse Keeper.

Life had grown hard for Burke Deveaux at the family inn and lighthouse since her father died. She missed his warmth and still expected to see him walking into a room, his big laugh booming. Burke and her mother were gradually adjusting to the change, and Lila had come home this winter to help, but the workload was heavy. With spring coming and tourism picking up in the South Carolina Lowcountry, Burke welcomed Hal Jenkins’ request for his son Waylon to work for them. Waylon, retiring early from the Navy, knew the island and the lighthouse, having grown up nearby. Burke also knew Waylon well since they’d grown up together. He’d always been older, and she wondered how he’d see her now.

Waylon had been away from Edisto Island for over twelve years now, traveling around the world in the military, but it felt good to be home. He’d hated learning Lloyd Deveaux was gone, the warm-hearted Lighthouse Keeper he’d followed around as a boy. But he liked the idea of coming to stay at the lodge at Watch Island to help the Deveaux family with the inn, lighthouse, and nearly five-hundred acres of land the Lighthouse Station occupied. He knew Burke had picked up many of her father’s old tasks and he looked forward to seeing her again. He’d kept feelings for her clamped down for years but one look at her brought them surging back. How would he handle that with them working together?


PRAISE FOR LIN STEPP AND HER RICH SOUTHERN NOVELS:

“This book feels just as tranquil as Edisto and has a wonderful, laid back flow, like beautiful ocean waves lapping up on the shore … you can’t help but fall in love with every facet of this novel.” – Christ F. JUST READS Review

“From the stunning backdrop of the South Carolina Lowcountry … this book was like going home.” – Kim Standridge Boykin, Bestselling Author of Palmetto Moon

Burke paused, cloth in hand, to look out at the line of brown pelicans crossing the sky in neat formation. She leaned on the rail of the gallery near the top of the tall lighthouse to watch them. The pelicans dropped closer to the waterline after a few minutes, dive-bombing when they spotted a fish, then lifting back into formation again.

She watched in awe as the lead bird rose up and down in flight, the other birds following in a perfect rhythmic wave. Burke knew the pelicans in formation behind the lead bird rode the wave of the bird in front of them, conserving energy and cooperatively helping each other. Myron Andric, the ornithologist staying with them at the Lighthouse Inn, had pointed out to her, too, that not the same bird always led in the formation. The lead bird would drop back after a time to rest, letting another bird take the lead in its place.

Burke sighed, moving to sit down on one of the narrow benches against the gallery wall. “I wouldn’t mind a little rest and help right now,” she said to herself. “It’s been hard keeping everything going since Dad died. I never realized how much he did until I had to pick up so much of his work load.” 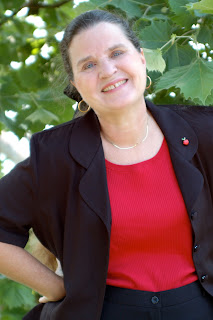 Lin Stepp is a native Tennessean, businesswoman and educator. A New York Times, USA Today, Publishers Weekly, and Amazon best-selling international author, Lin has twenty published novels out now, including her twelve beloved Smoky Mountain novels, all set in different Tennessee and North Carolina locations, three Mountain Home books, a novella in one of Kensington’s Christmas anthologies, and four South Carolina coastal novels, including her three Edisto Trilogy books and her first release in the new Lighthouse Sisters series. Lin and her husband J.L. also write regional guidebooks, including a published Smoky Mountain hiking guide and a TN and a SC state parks guidebook, all filled with hundreds of color photos. Stepp’s latest 2022 releases are Eight at the Lake, set in Dandridge near the Smoky Mountains, and Light the Way, set at the SC coast. Writing and adventuring are her joys and more novels set in the Smokies and at the beach are on the way, as well as more colorful regional guidebooks. Lin’s title Claire At Edisto was the 2019 Best Book Award Winner in Fiction: Romance, sponsored by American Book Fest and her novel Welcome Back a finalist in the 2017 Selah Awards. Lin enjoys speaking for events, festivals, libraries, and book clubs. And she loves reading, hiking, exploring out of doors, and keeping up with her readers. Look for her pages on Facebook and Twitter and follow her monthly blog and newsletter, too, that you will find on her website at: www.linstepp.com 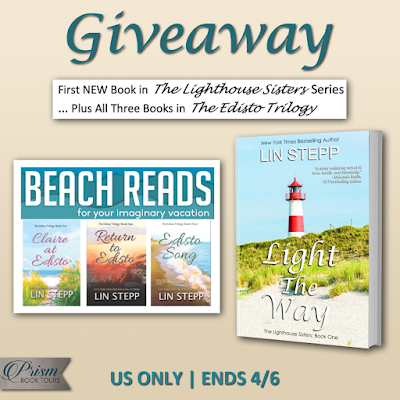 One winner will receive print copies of Light the Way, Claire at Edisto, Return to Edisto, and Edisto Song by Lin Stepp, and bookmarks (US only)