Praise for BREAKING THE MAAFA CHAIN

“[Breaking the Maafa Chain] is powerful in detailing the cruelties of the transatlantic slave trade, and sensitive and intimate in its portrayal of the girls’ struggles to maintain their dignity and hold on to the memories of their African heritage. With descriptions rich in sensory details, a narrative that forms a swift, irreversible current, and conversations imbued with emotion, Anni Domingo’s story of the Maafa, the African Holocaust, is unforgettable.” —Foreword Reviews, starred review

“The story of Sarah Forbes Bonetta, extraordinary even in extraor­dinary times, known to some in Sierra Leone, though virtually unknown elsewhere. Now Anni Domingo has brought her vividly to life in this richly imagined and compellingly told tale. Breaking the Maafa Chain is a gift to readers everywhere.” —Aminatta Forna author of The Window Sea

“Part fact, part fiction, Breaking the Maafa Chain is an important book, beautifully told. Domingo’s premise is a bold and uncom­promising one—taking what is known, the story of Salimatu, the ‘Black Princess’, Sarah Forbes Bonetta, and weaving through it the story of her fictionalized sister, Fatmata, Faith. Domingo makes an eloquent point: that although the sisters suffered different fates, both were unfree: Fatmata enslaved in North America and Salimatu gifted to Queen Victoria, and utterly at her whim. It is a story that has resonance today, where Meghan Markle was expected to shape herself to a white institution, to belong.” —Guinevere Glasfurd author of The Year Without Summer

“Anni Domingo brings great sensitivity to her fictionalized account of the remarkable young life of Sarah Forbes Bonetta, the ‘African Princess’, who became a god-daughter to Queen Victoria. The internal struggles of Salimatu (Sarah) are movingly explored as she struggles to remain true to her identity as an African after being taken from her homeland and brought to England as a gift from ‘the King of the Blacks to the Queen of the Whites.’ A comparable story is told of Salimatu’s sister Fatmata (Faith) who is transported to the United States before emancipation. Carefully constructed with a keen eye for historical accuracy, Domingo reveals a compas­sionate and affectionate Queen Victoria who is devoted to her African god-daughter. This is also an epic story of two sisters who are separated towards the end of the transatlantic slave trade, but never forget each other.” —Stephen Bourne author of War to Windrush and Evelyn Dove

“Anni Domingo’s Breaking the Maafa Chain is so rich in detail and dialogue; it is simply seductive. She captures so well, a little girl, Salimatu, who recalls the security of her family life, who is trans­ported to a bewildering future in England to become Sarah, where she has to stand strong and survive. Not only will this book be read for the sheer enjoyment of a beautifully written novel, but for the learning gained. It is a historical novel that cannot be ignored.” —Kadija Sesay literary activist and author of Irki 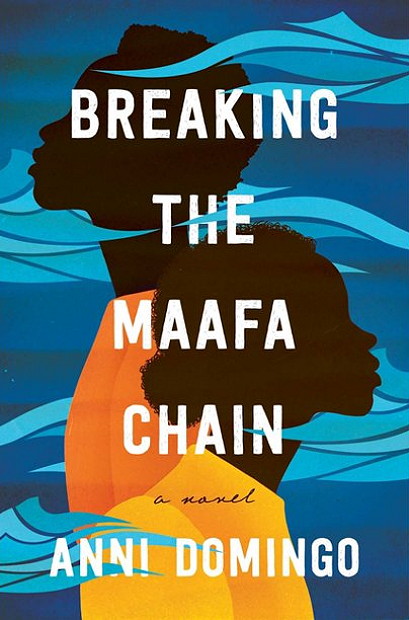 A richly imagined story of two sisters’ struggle for true freedom in the mid-nineteenth century as their paths diverge in the middle passage—one to the court of Queen Victoria, the other to an American plantation.

Salimatu and her sister Fatmata are captured, sold to slavers, renamed and split apart. Forced to change their names to Sarah and Faith, they end up on opposite sides of the Atlantic Ocean. Faith is taken to America, where slavery is still legal and she is stripped of all rights. Sarah ends up in Victorian England and as the goddaughter of Queen Victoria. Can the two sisters reclaim their freedom and identity in a world that is trying to break them down? Will these once inseparable sisters survive without each other? And if they do find each other again, will they find the other changed beyond recognition?

Based on the true story of Sarah Forbes Bonetta, Breaking the Maafa Chain is by turns epic and intimate and will take the readers on a journey of loss, survival, and hope.

You can purchase Breaking the Maafa Chain at the following Retailers: 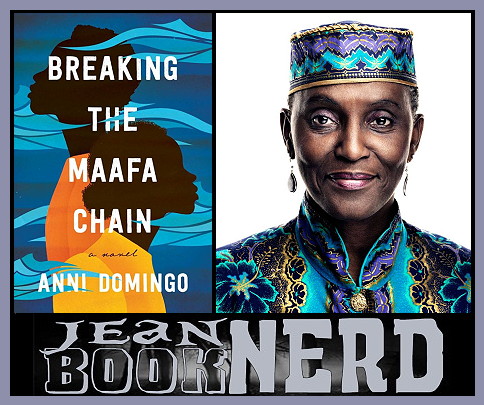 Photo Content from Anni Domingo
Anni Domingo is an actress, director and writer. She is currently a lecturer in Drama and Directing at St. Mary’s University in Twickenham and Rose Bruford College of Speech and Drama. Anni’s poems and short stories have been published in various anthologies and an extract from Breaking the Maafa Chain won the Myriad Editions First Novel competition and was featured in the New Daughters of Africa anthology edited by Margaret Busby.
TWITTER / GOODREADS / FACEBOOK / INSTAGRAM

Stripped of everything but our black skins, our ritual scars, our beings, we are tied together in rows and jammed into another djudju pit, packed in so close no one can move. We lie on our sides, rough wooden boards hard against our bare skins, rubbing our shoulders raw, chained to the living and to the dead.

Now I know what fear smells like. It is the smell of grown men, groaning, sweating, and stinking. Fear is women crying, wailing, and calling on the ancestors to save them and their children before they are lost to Mamiwata.

All around me chains rattle and whips crack as the sails flap, boards creak, and ropes stretch. The noise in the cramped space swirls inside my aching head, as it hits the wooden sides of the swaying ship, drumming wild thoughts and dark fears into my mind. I feel the howls of those beside me, those above me and those below me run right through my body. The call of the Ochoema, the bird of parting makes my heart pound holding me tight before fading into the darkness but leaving me in pain.

I sink down, and weep in a way I have never wept before in all my fourteen seasons. Ayeeeee. Ogun, god of gods, help me.

Through the tears, I see everything that had been. My heart aches for Salimatu, my sister, my mother’s child, captured and sold, to Moors? To the white devils? There in the back of my eyes, way back, are the spiritless bodies of my mother Isatu and father Dauda, now gone to the land of our ancestors, without due honour. I see others too, Maluuma, mother of my mother, Lansana, my father’s first son, gone too. I fear that Amadu, my father’s last son, has also joined the ancestors. I have not seen him since he ran, but now can he be here in this pit, this wooden devil’s hole, and not know that I am close by?

‘Amadu, Amadu, son of Chief Dauda of Talaremba near Okeadon,’ I cry out, again and again.

‘Who calls for Amadu of Talaremba so loudly?’

‘They didn’t get him,’ he replies. ‘He never stopped running. Santigie and the white man did not have time to chase after him.’

I recognize the voice. It is Leye, the man who speaks the white man’s tongue.

The relief I feel flows through my words. ‘Olorun, creator of the Egbadon people. I praise you; I bless you.

There are loud cries in many tongues from the different tribes of peoples.

‘Now they will kill us and eat us,’ says one.

‘We’re sacrifice to their gods and to Mamiwata,’ says another, the shouts getting louder.

Mamiwata? I remember what my grandmother, Maluuma told me a long time ago. Mamiwata, goddess of water, drags those who disturbs her being down into the watery underworld to join the ancestors. Ayee, ayee.