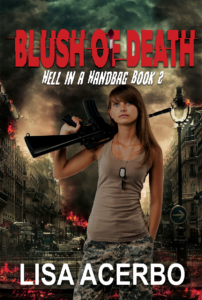 Hell in a Handbag, Book 2

Dying is anything but rosy. I wake with Caleb at my side. Having someone
next to you during the zombie apocalypse is always a comfort until he
explains a mysterious illness almost finished the job of the undead and
ended my life.

It can always be worse, and it is. Outside the fortified High Point Inn,
the zombies keep coming, there’s turmoil within the ranks, and my best
friend, Lilly, has been kidnapped.

I slept through it all. Sure, I was suffering from an unknown malady, but
that’s no excuse.

Unable and unwilling to sit in bed, I develop a rescue plan. As soon as
I’m recuperated, Caleb and I are off into the wilderness to find
Lilly.

Zombies, I expect. The other surprises nearly send me to the grave again.
Some days, it’s hard to face the ugly truth, but I realize that not
every monster is evil, and not every human has a soul.

Hordes of zombies, mysterious illnesses, and the death of friends. Now
there’s a kidnapping. How much can one woman take? 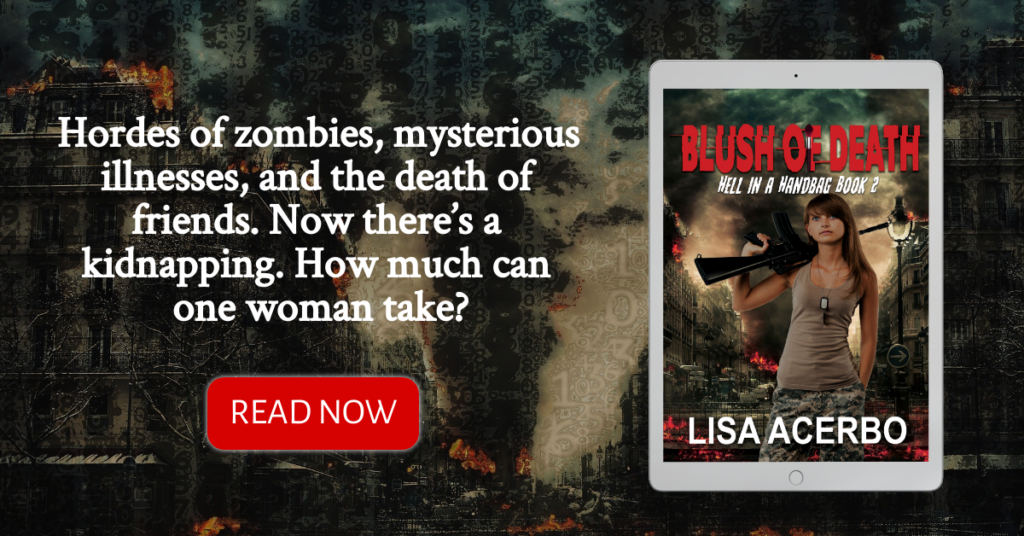 A breeze stroked her face and sent brown leaves scurrying along the ground. The meadow basked in the full moon. Wrapped in a blanket and perched in a deckchair at the edge of the field, Jenna enjoyed her time outside.

So happy to be out of bed even for a few moments. Hate being sick.

Jenna closed her eyes, and a distant whinny of the horses greeted her. She rested, ignoring the annoyingly cute but hovering Caleb.

Love him, but wish he’d go inside and give me a few minutes of peace. There’s only so much caretaking a person can take.

In the distance, a gunshot punched through the air. Shouts followed in the wind.

“Streaker,” someone yelled from the woods. “Heading to the inn.”

She sat straight in her chair. Her gaze focused on the direction of the voices.

“Stay here. I’ll keep you safe.” Caleb disappeared from her side.

A few quiet beats passed before a faint, inhuman moan greeted her. Still too far away, the Streaker hid in the shadows.

Door slamming shut, Caleb returned holding a scythe, his weapon of choice. He plopped a gun in her lap and handed her bullets. “You remember how to load it?”

“I was sick, not suffering from dementia.”

A Streaker shuffled out of the line of conifers. Another zombie stumbled from the woods. Behind them, two men from the inn battled additional undead.

“Can you see it in the dark?” Caleb asked.

“When did the apocalypse become clothing optional?” Jenna asked, staring at the naked form lumbering her way.

The Streaker’s pock-marked breasts lurched in step with the creature. If that wasn’t bad enough, the other skeletal monster had decomposed to where bones poked from putrefied skin.

A stench of rotten-fish-in-a-dumpster filled her nose.

She put an arm to her face in hopes of muffling the smell, but nothing could stop the overpowering stink.

Caleb ran through the night, and the fight between him and the undead blurred.

Loading the gun, she watched him wrestle with the zombie. The scythe slid through the skin and muscle of its arm, but the monster continued to attack. A second Streaker stumbled past Caleb, nearing the porch.

Caleb hacked the undead’s kneecaps, then turned, leaving the animated corpse struggling to stand. He launched himself at the bag of bones nearing the porch.

The two crumbled to the ground in a heap.

The Streaker rolled and stood over Caleb. Close by, the other undead crawled and reached out for Caleb. Its decayed hand grasped his foot. He kicked out and those same undead fingers slipped away. Decaying flesh streaked his black boots.

“Watch yourself.” Jenna’s words drew the standing zombie’s attention. It turned its emaciated head in her direction and gnashed its teeth.

The monster released a spitting hiss and took a step, but Caleb grabbed at its back leg. The skin peeled away, and the Streaker hobbled closer with a snarl that displayed a mouthful of decayed teeth, yellowed and full of pulpy bits of bloody flesh.

With a single-mindedness, one focused on the terrible hunger driving it. The rattling bones reached the bottom of the porch steps.

Jenna steadied herself and took aim. The shot shattered the bones in its leg, dropping it to the ground. She sank back into the chair, depleted—her chest heaving.

The other Streaker managed to stand.

Caleb circled the gray-skinned, sagging bit of anatomy. Machete high, he sliced through the air. The weapon stuck in the creature’s neck.

The skeletal smile never left the zombie’s lips. Its head lobbed forward, still attached by a thread of bone and muscle.

He snarled, swung again, then slammed into the undead’s neck once more. The swing of the weapon sliced, separating head from body. The bottom half of the corpse crashed to the ground. The head lolled next to it.

With fluid movements, he turned to the undead at the bottom of the steps, struggling to crawl and beheaded it.

Jenna sat tall. “Any more of them?”

“Don’t think so, but let’s get you back inside.”

“Thank God. That’s enough excitement for the night. This recovering patient is feeling the burn. What the hell is wrong with me?”

Caleb opened his mouth to answer.

Jenna put up a warning hand. “Stop. Don’t even start.” 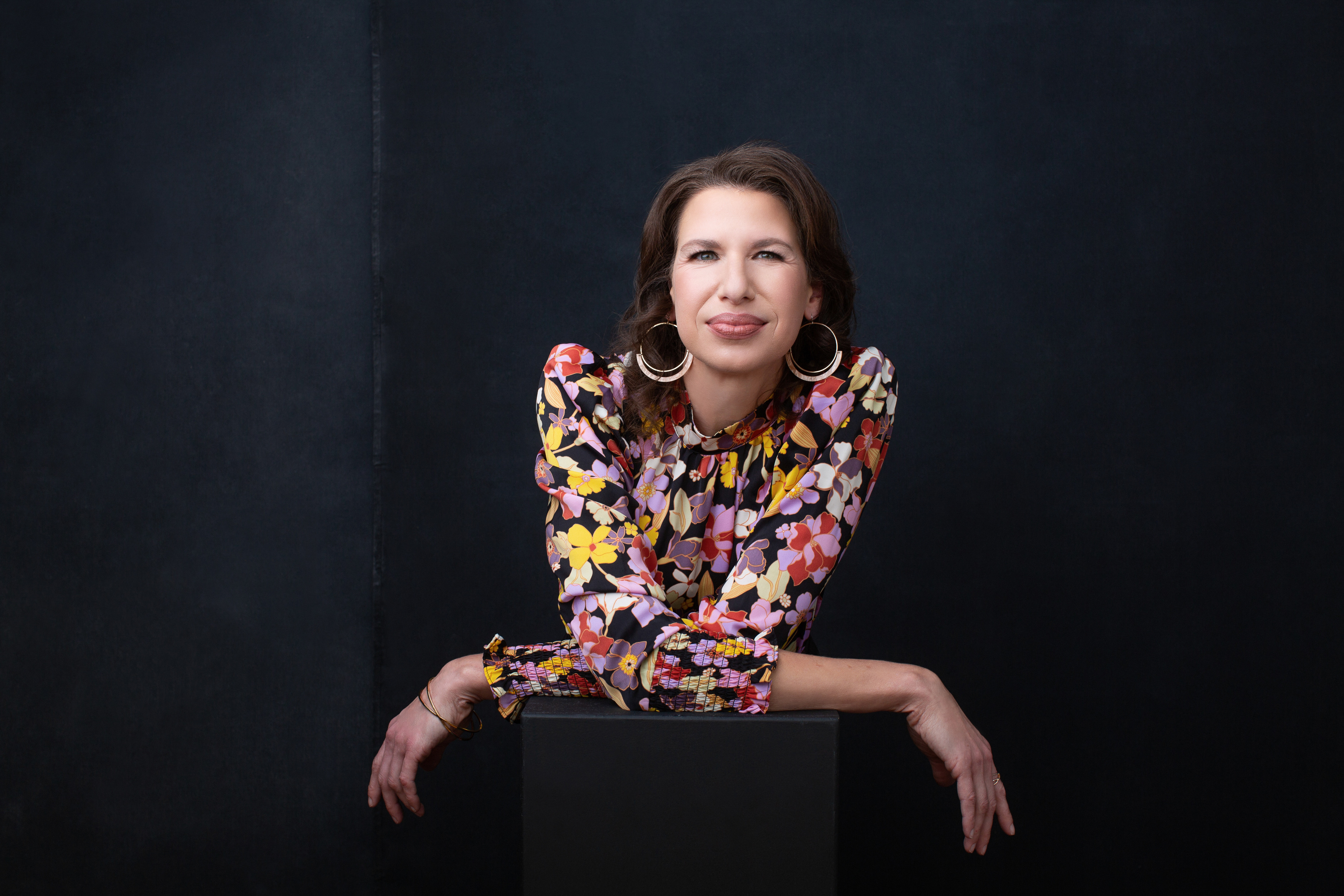 Lisa Acerbo enjoys teaching high school and is an adjunct at local community colleges in Connecticut. She is a graduate of the University of Connecticut where she earned a BA in English Education. When not reading, writing, hiking, drinking coffee or wine (depends on the hour), she spends her time with her husband and three rescue dogs.